It's time once again for Political Calculations' week-long celebration of the most American of American holidays: Thanksgiving!

But this year, we're looking over a grim scene following the aftermath of what we described as the Turkey Apocalypse last year. Has the situation for America's Thanksgiving holiday gotten any better in the following year? 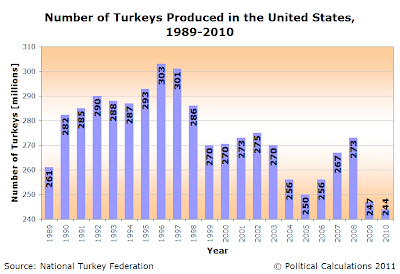 That's a small drop compared to the previous year's decimation, which was the largest ever recorded over a single year period of time.

Let's next look at how much America's turkey farmer's are getting per turkey. 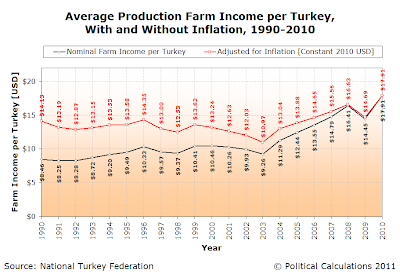 Here, after looking at both nominal and inflation-adjusted prices, we find that U.S. turkey producers raked in more money per turkey produced in 2010 than ever before, with the dollar amount of income from each turkey produced rising in real terms by $3.22, from $14.69 to $17.91. That's a 21.9% year over year increase!

Using our Supply or Demand tool, the combination of that apparent increase in price with a decrease in quantity tells us that the price of turkeys has increased in 2010 due to a relative decrease in their supply.

But how can a 1.2% decline in the number of turkeys produced result in a 21.9% increase in their price? We'll tackle that question in our next Thanksgiving week post!