Political Calculations
Unexpectedly Intriguing!
30 April 2012
A First Look at Where GDP Will Be in 2012-Q2 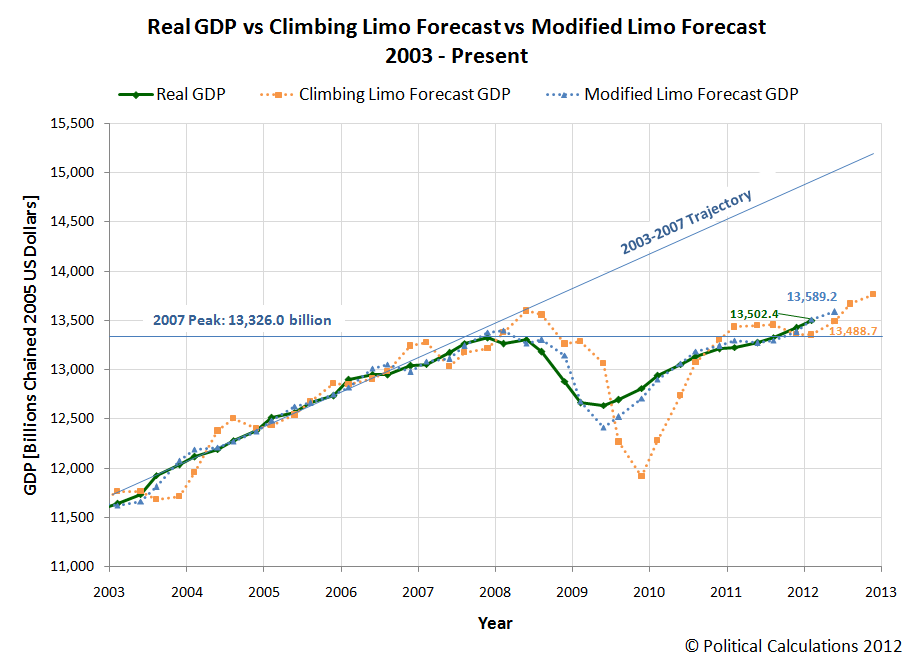 In terms of the annualized growth rate from the previous quarter, our forecast for 2012-Q1 would have been 2.4%, just one tick below the 2.5% rate that the "consensus" among all economic analysts had projected the value just before the BEA's GDP news release, which put its first official estimate of the annualized growth rate for the quarter at 2.2%. We point this out to illustrate how sensitive the growth rate calculation is to very small differences in the measured versus projected levels of GDP.

We would anticipate that the figure for 2012-Q1 GDP will be revised upward during the next two months.

Looking forward to the current quarter (2012-Q2), and incorporating the BEA's first estimate of 2012-Q1 GDP into our "modified limo" forecasting technique, we would initially anticipate that the likely range for real GDP in the U.S. will be centered around $13,589.2 billion in terms of constant 2005 U.S. dollars. Assuming that deviations between our projected value and the actual recorded can be described by a normal distribution, we would give nearly 70% odds that 2012-Q2's inflation-adjusted GDP level will fall in a range between $13,367.7 billion and $13,649.9 billion in constant 2005 U.S. dollars.

If we were to bet on which side GDP for the quarter will be with respect to our projected midpoint however, we would take the under.