Political Calculations
Unexpectedly Intriguing!
July 26, 2012
Should You Rob a Bank?

A group of economists recently published an article looking at the statistical return to bank robberies in Britain. John Timmer reviews their results:

The results were not pretty. For guidance on the appropriateness of knocking over a bank, the authors first suggest that a would-be robber might check with a vicar or police officer, but "[f]or the statistics, look no further. We can help. We can tell you exactly why robbing banks is a bad idea."

"Given that the average UK wage for those in full-time employment is around £26,000, it will give him a modest life-style for no more than 6 months," the authors note. If a robber keeps hitting banks at a rate sufficient to maintain that modest lifestyle, by a year and a half into their career, odds are better than not they'll have been caught. "As a profitable occupation, bank robbery leaves a lot to be desired."

Worse still, the success of a robbery was a bit like winning the lottery, as the standard deviation on the £20,330.50 was £53,510.20. That means some robbers did far better than average, but it also means that fully a third of robberies failed entirely.

We thought we'd look at the economics of bank robbery in the United States, using the FBI's published statistics for bank crimes in 2011 as our starting point.

Of these 5,086 bank crimes, 4,534 resulted in the offenders making off with loot, or 89.2% of the total. That is what we'll call our "initial success rate", as the remaining 552 bank crimes failed to produce any income at all for the offenders for any length of time. 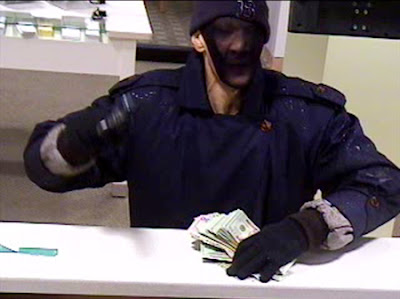 Next, we factored in the 973 bank crimes where the loot that had been stolen was able to be recovered by law enforcement. That lowers the number of successful bank robberies in the United States in 2011 to 3,561. This figure also means that the actual success rate for robbing banks in the U.S. is much lower than our initial success rate would suggest, as the offenders were only able to hang onto the loot in 70.0% of all bank crimes.

We next looked at the offenders "take" - the loot they robbed from the banks! Since nearly 99.8% was in the form of cash, we limited our math to only consider this portion of their take.

Dropping out the bank crimes where the offenders failed to take any loot increases the take per initially successful crime to $8,454.23. Adjusting the math to take into account the $8,051,992.97 that law enforcement was later able to recover, we find that the average successful take of a bank robbery in the U.S. in 2011 is just slightly higher at $8,503.09.

Unlike Britain, where the average is 1.6 criminals per bank job, bank crimes in the U.S. would appear to be more of a solitary pursuit. For the 5,086 bank crimes recorded in 2011, the FBI believes just 6,088 people were involved. That works out to an average of 1.2 people per each bank crime.

The average take per successful offender then in the U.S. in 2011 is $7,085.91. This amount is the equivalent of working at the federal minimum wage of $7.25 per hour for just over 977 hours, or about six and a half months if working at that rate full time.

By contrast, the median expected annual salary of an entry level bank teller in the U.S. is $22,896.

So, if an offender wants to continue their life of stealing cash from banks and live at least as well as the lowly paid entry level employee they face across the counter as they commit their crimes, they'll have to rob more than two banks per year.

And that's where our tool today comes into play! Here, we're considering the odds that you'll continue to be successful in robbing banks if you continue to rob banks. Just enter the odds of success and the number of bank crimes into the tool and we'll do the rest!

Using our default 70% success rate, we estimate that a prospective bank robber has less than a 50% chance of successfully committing two bank robberies in their choice of career.

And suddenly, choosing to be that person behind the counter looks pretty good in comparison. If only Boston's "Trench Coat Bandit", pictured above, was that smart - somehow, we don't think the 22 and a half years he'll be staying as a guest of the state of Massachusetts pays as well in comparison.