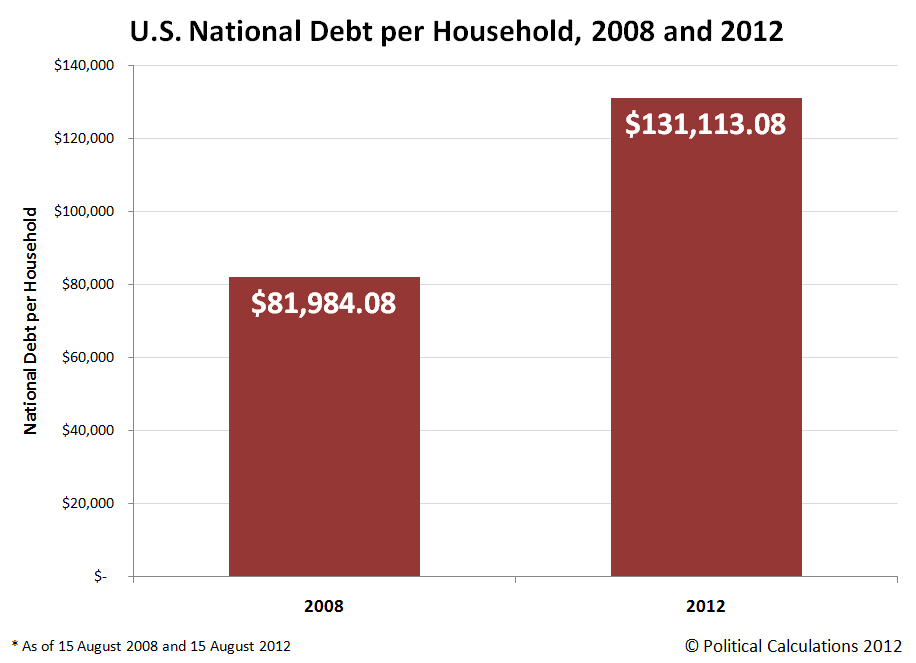 A good question to ask is how much of this increase in the national debt might be attributed to President Barack Obama, who was sworn in as the 44th President of the United States on 20 January 2009?

Typically, an incoming President bears little responsibility for the spending that occurs during their first year in office, since the budget that applies for that fiscal year will usually have been approved by the U.S. Congress in the previous year and signed into law by their predecessor.

How the U.S. government's budget for 2009 became law however was anything but typical.

Here, the Democratic Party-controlled Congress in 2008 only sent three of 12 appropriations bills for the 2009 budget year to President George W. Bush for his signature before he left office, deliberately withholding the remaining nine bills until after President Obama assumed office to avoid likely vetoes given the level of spending proposed in them. In 2009, the incoming Democratic Party-controlled Congress combined those nine bills into one "omnibus" bill, which President Obama signed into law on 11 March 2009.

Congressional Quarterly has a fairly detailed report of the FY2009 budget omnibus' appropriations bill history, but that requires a subscription to access. Here's the key quote from the article:

the omnibus provided a total of $1.05 trillion — $410 billion of it for discretionary programs — and included many of the domestic spending increases Democrats were unable to get enacted while George W. Bush was president.

But that doesn't yet account for President Obama's economic stimulus package of 2009, which added some $825 billion to federal spending over its lifespan, above and beyond the U.S. government's annual budget.

That fact is especially driven home once we consider the voting record of Barack Obama in the U.S. Senate, where from 2006 through 2008, he supported or approved nearly every appropriations bill the Congress advanced. Or in the case of 2008, where he was often not present to vote for the increases in spending during this period as he ran for President, where he instead signed on to the massive increases in spending he desired after becoming President.

It is therefore reasonable to conclude that the combination of his voting record for government spending while in the U.S. Senate along with his spending record as President makes President Obama uniquely responsible for virtually all the federal government's spending and accumulated debt from Fiscal Year 2007 onward.

And that means that President Obama is uniquely and directly accountable for increasing the national debt burden of American households by $49,129 per household from 2008 through 2012.

U.S. Treasury. The Debt to the Penny and Who Holds It. [Online Application]. Accessed 16 August 2012.