Political Calculations
Unexpectedly Intriguing!
22 August 2012
Which Species Should You Save?

Suppose, for a minute, that you were in charge of the global organization to preserve endangered species of rhinoceros, of which the two species most at risk of extinction are the Javan rhinoceros and the Sumatran rhinoceros. 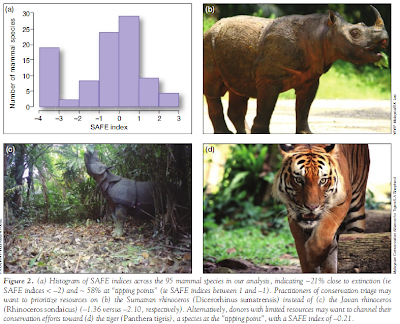 Unfortunately, because there is a long list of other species preservation efforts that your fellow environmentalists prefer to support, your organization's resources for preserving these species are limited. So much so that dividing your limited resources between efforts to preserve both species simultaneously will not be sufficient to halt their respective declines in numbers. But, if you threw all your efforts behind preserving one of these species of rhinoceros, you might be able to make a critical difference in its future.

But which one should you choose?

The answer is you should choose to put your limited resources behind the species with the more viable population.

By that, we mean the species whose numbers have not diminished to the point where a random catastrophe, such as a hurricane or tsunami, would be capable of causing their extinction.

Choosing between the species then comes down to the numbers, the math for which has been worked out in a 2011 paper by Gopalasamy Reuben Clements, Corey J.A. Bradshaw, Barry W. Brook and William F. Laurance, describing the SAFE index, which uses a threshold population target to measure how threatened a species may be.

The Species' Ability to Forestall Extinction (SAFE) index measures the relative threat faced by various species, incorporating the best estimates of the species' total population within its known range and its Minimum Viable Population figure - the minimum population needed for it to last over the long term while sustaining its evolutionary potential, which perhaps might better be described as avoiding problems that come from excessive inbreeding within too small a population.

Our tool below is built using the math presented in the researchers' paper. The default data applies for the Sumatran rhinoceros: 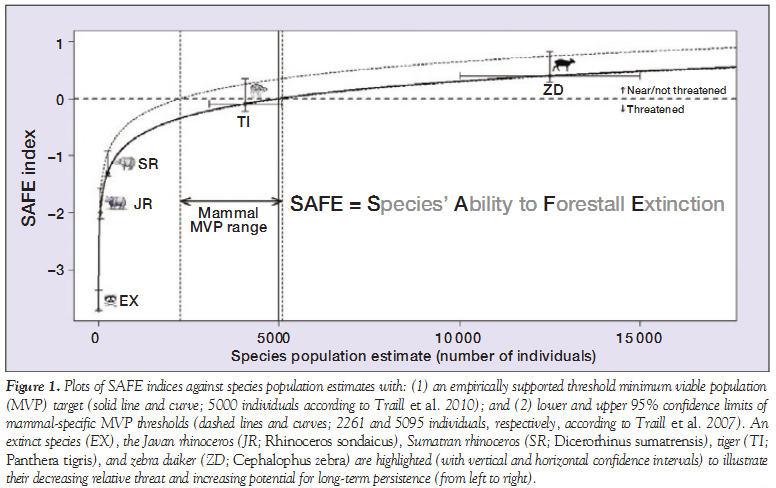 We found the SAFE index interesting because it appears to provide a better indication of a species' viability than the percentage of range loss measure that is often used to determine the relative threat of extinction to various species.

But what really sets it apart for us is that this method of prioritizing species recovery efforts would seem to also reflect the actual choices made by the combination of individuals, scientists, lawmakers and organizations seeking to preserve various species, which have consistently put more funding to work in support of preserving species that are only "threatened" as compared to those that are "endangered".

Perhaps that's because they implicitly recognize that this approach is the only one that provides any real chance for success. Because if success can be obtained for one threatened or endangered species, it can then free up limited resources to aid the recovery of other species as well as provide the real knowledge for how that goal might be achieved. It's the snowball effect for paying down debt applied to the problem of conservation.

That's something that upsets many environmental activists, who argue that people must sacrifice their interests in ever greater shares to achieve the activist's goals - whether they can reasonably be achieved or not. But then, since so many of these individuals have such different priorities from most people, it's probably better to stick with the current, imperfect system that has evolved over time, as it somehow seems to work.