Now that the average price of gasoline in the United States is clocking in at all-time record levels for this time of year, especially in California, what effect will that factor have upon the official U.S. unemployment rate, which just clocked in at its lowest level since early 2009?

Unfortunately, that's the wrong question to be asking today, because it takes roughly two years for a major change in the price of oil and gasoline to play out and fully impact the U.S. unemployment rate. The right question to ask today is: "what was the price of gasoline doing two years ago that put the events in motion that are just now about to affect the U.S. economy?

The answer is revealed in our chart below, in which we've shifted the average price of motor gasoline in the United States forward in time by two years to visually correlate the price of gasoline with the recorded official U.S. unemployment rate for each month since January 1976 (or actually, since January 1978): 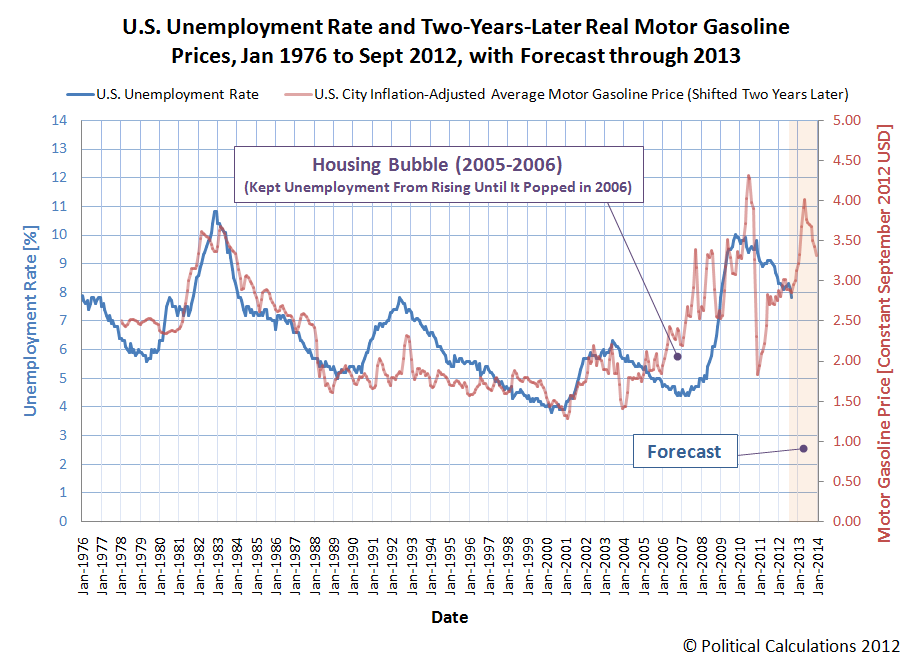 Here, we see that the U.S. unemployment rate has been tracking pretty closely with where the two-year time lagged price of gasoline in the U.S. would put it - including the "unexpectedly" low 7.8% unemployment rate that was just reported for September 2012.

The bad news is that if that correlation between the time-lagged price of gasoline and the U.S. unemployment rate continues, the U.S. is about to see a major spike upward in its unemployment rate, corresponding to the sustained surge in gasoline prices that began at the end of 2010.

It's only a coincidence that this surge in unemployment would appear set to take place just as the U.S. government approaches its self-created "fiscal cliff", where the ongoing failure of the Obama administration to negotiate government spending reductions in good faith with the U.S. Congress threatens to push the U.S. directly into recession in early 2013!

To start getting a feel for what the real forces are behind the relationship between oil and gasoline prices and the U.S. unemployment rate, let's turn to the San Francisco branch of the U.S. Federal Reserve's Dr. Econ for an explanation:


What effects do oil prices have on the "macro" economy?

I've just explained how oil prices affect households and businesses; it is not a far leap to understand how oil prices affect the macroeconomy. Oil price increases are generally thought to increase inflation and reduce economic growth. In terms of inflation, oil prices directly affect the prices of goods made with petroleum products. As mentioned above, oil prices indirectly affect costs such as transportation, manufacturing, and heating. The increase in these costs can in turn affect the prices of a variety of goods and services, as producers may pass production costs on to consumers. The extent to which oil price increases lead to consumption price increases depends on how important oil is for the production of a given type of good or service.

Oil price increases can also stifle the growth of the economy through their effect on the supply and demand for goods other than oil. Increases in oil prices can depress the supply of other goods because they increase the costs of producing them. In economics terminology, high oil prices can shift up the supply curve for the goods and services for which oil is an input.

High oil prices also can reduce demand for other goods because they reduce wealth, as well as induce uncertainty about the future (Sill 2007). One way to analyze the effects of higher oil prices is to think about the higher prices as a tax on consumers (Fernald and Trehan 2005). The simplest example occurs in the case of imported oil. The extra payment that U.S. consumers make to foreign oil producers can now no longer be spent on other kinds of consumption goods.

Despite these effects on supply and demand, the correlation between oil price increases and economic downturns in the U.S. is not perfect. Not every sizeable oil price increase has been followed by a recession. However, five of the last seven U.S. recessions were preceded by considerable increases in oil prices (Sill 2007).

Alan A. Carruth, Mark A. Hooker and Andrew J. Oswald connect the macro-economic dots then between yesterday's oil and gasoline prices and today's unemployment rates in their 1998 paper:


Intuitively, the mechanism at work is the following. An increase in, for example, the price of oil leads to an erosion of profit margins. Firms lose money, and begin to go out of business. To restore a zero-profit equilibrium, some variable in the economy has to alter. If labor and energy are the key inputs and interest rates are largely fixed internationally, it is labor's price that must decline.

But there is only one way in which this can happen. If wages and unemployment are connected inversely by a no-shirking condition, equilibrium unemployment must rise, because only that will induce workers to accept the lower levels of pay necessitated by the fact that the owners of oil are taking a larger share of the economy’s real income.

The same kind of process follows any rise in the real rate of interest. When capital owners' returns increase, the new zero-profit equilibrium requires workers’ returns to be lower. In a world where the level of unemployment acts as a "discipline device," higher real input prices lead to lower wages and greater unemployment rates.

This effect is what Obama administration officials are after in part when they state their political objective that the price of fuel must "necessarily skyrocket", as it gives the administration a target to scapegoat (capital owners) while simultaneously increasing their client base of unemployed individuals who will become dependent upon government-provided welfare for their income.

Or maybe they're just a bunch of screwups where all this can all be chalked up to "bad luck"....