What's wrong with using moving averages to assess trends in economic data? After all, it's a practice that is endorsed by the Federal Reserve.

That question arises today because of the WSJ's Josh Mitchell's analysis from last Friday, which suggests that initial jobless claims are trending down:

The number of Americans applying for unemployment insurance has fallen sharply since summer. The four-week moving average of first-time jobless claims inched up by 750 last week to 365,500. But the figure was below mid-June’s level of more than 387,000 claims. That is a sign that employers are laying off fewer workers and the job market could be healing.

And so it would seem, except there was a huge problem in the data for the week ending 6 October 2012, which might best be described as a California-sized hole in the data:

Last week, California reported a large drop in applications, pushing down the overall figure to the lowest since February 2008.

This week, it reported a significant increase as it processed applications delayed from the previous week. (Read More: Why Jobless Claims May Not Be as Good as Market Thinks.)

A department spokesman says the seasonally adjusted numbers "are being distorted ... by an issue of timing."

Since the Labor Department's four-week moving average for new jobless claims includes this data reporting anomaly, where one week's data was recorded more than 10% below where it might otherwise have been reported (if the California state government's Employment Development Department had properly processed and reported its claims from that week), this measure fails to provide an accurate depiction of the current trends for new jobless claims in the U.S.

In this case, the effect of the data reporting anomaly makes the situation for new jobless claims look better than it really is. Worse, at this writing, that data anomaly will be used to calculate the moving average in new jobless claims for another two weeks yet, which means that the distorted impression it creates will be with us through the Tuesday, 6 November 2012 national election, until it is no longer included in the Labor Department's calculation of the four-week moving average for the new jobless claims report it will issue on Thursday, 8 November 2012!

It is the moving average's inability to recognize data outliers that represents one of its greatest weaknesses. Based on only four data points, the four week moving average just isn't capable of accounting with outliers in a practical manner!

That's where the statistical control chart-style approach we've developed over the last several years can do a much better job. Here's what the recent data looks like from our perspective: 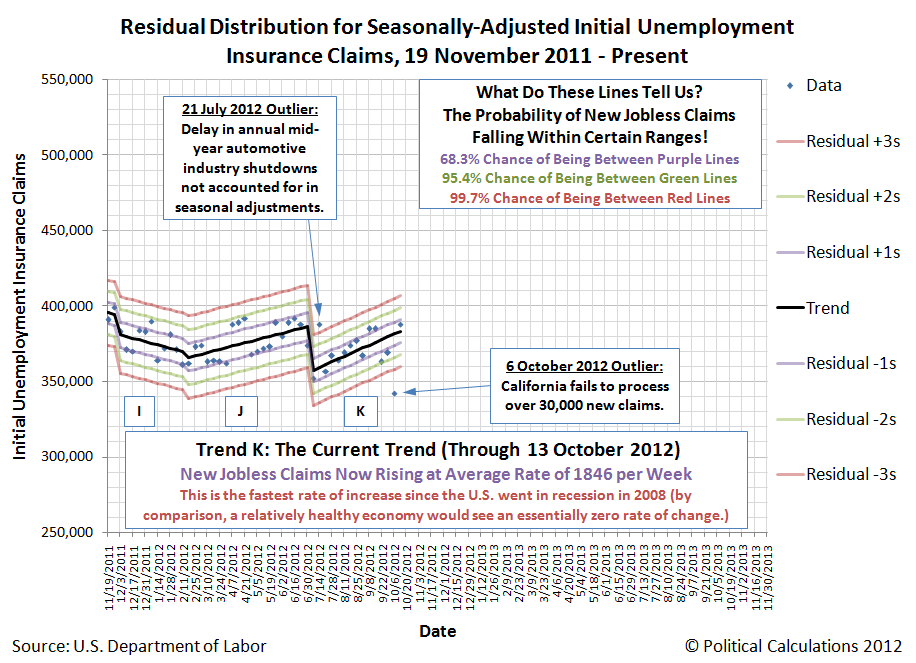 The major trends in the chart above, identified by the letters "I" through "K", are described in greater detail here (along with Trends "A" through "H"!)

The current trend, "K", began after the national average for gasoline prices fell below $3.50 per gallon in early June 2012. As gasoline prices have generally risen since that time, we've observed a generally rising trend in the number of new jobless claims filed each week.

Treating the 6 October 2012 data point as an outlier, we find that through the week ending 13 October 2012, the number of new jobless claims being filed each week, a proxy for the rate of job layoffs in the U.S., is currently rising at an average rate of over 1800 per week - a rate that is faster than at any time since the U.S. last fell into deep recession in mid-2008. This rate of increase also excludes another data point outlier for the week ending 14 July 2012, where the BLS' seasonal adjustments didn't account for a delay in the typical mid-year plant shutdowns in the automotive industry.

That's likely a bit inflated, as the state of California is playing catch up in reporting the large number of claims it failed to process in the week ending 6 October 2012. If we exclude the initially-reported data for last week, we find that the number of new jobless claims in the U.S. is rising at a rate of over 1500 per week. That would still be the fastest rate of increase recorded for new jobless claims in the U.S. since the nation fell into deep recession in mid-2008.

As for whether it ever makes sense for using a moving average to evaluate this kind of data, we'll say that it does, but only for certain unique occasions. Since our statistics based method needs at least 6 to 10 data points to establish whether a trend exists, a moving average might provide a useful picture in the limited period of time following when a break in an established trend occurs until our method can define the new trend.

But once that trend is defined, our method provides a more accurate picture of what's actually going on in the economy. Right now, the real trend for new jobless claims indicates a rising number of layoffs each week in the U.S., which is something the Labor Department's four-week moving average will confirm in the form of a sudden increase after the election.