How many pages does it take to explain the basics of the U.S. Medicare program?

If you answered "a lot more than it used to", you're right! Each year, legal publisher CCH puts out a book simply titled Medicare Explained, which they describe as follows:

A book for Medicare beneficiaries and others who need a relatively thorough explanation of the Medicare program with particular emphasis on services covered in institutional settings and services provided by physicians and suppliers. A detailed explanation is provided regarding eligibility, enrollment, benefits, exclusions and payment rules for Medicare Parts A, B, C and D. This book also explains the process for submitting beneficiary claims and filing an appeal.

As we saw with CCH's Standard Federal Tax Reporter and the U.S. tax code, the growth of the complexity of the laws and regulations affecting Medicare can be measured by the number of pages this particular book requires each year. The summary for the 2012 edition of CCH's Medicare Explained illustrates why that's the case:

Medicare Explained has been prepared for Medicare beneficiaries and others who need a relatively thorough explanation of the Medicare program with particular emphasis on services covered in institutional settings and services provided by physicians and suppliers. Published annually, Medicare Explained includes changes made during 2011 by law and regulation amendments and updates to program manuals issued by the Centers for Medicare and Medicaid Services (CMS).

Our chart below shows how that's changed for each year in which an edition has been published since 1996, which we've now updated through 2012: 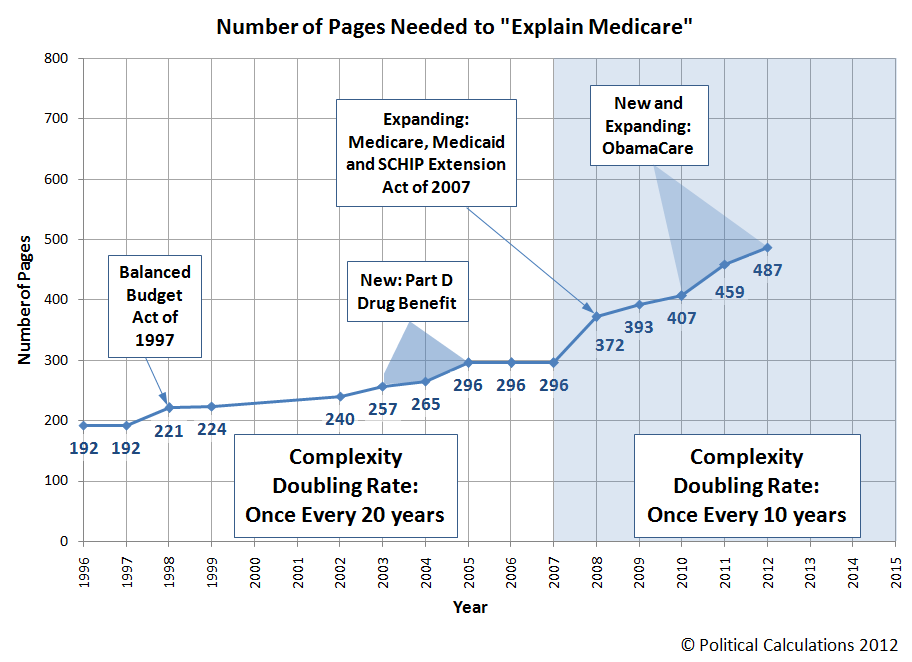 Since 2011, the Medicare program has grown in complexity by over 6%, as measured by the addition of some 28 pages to the page count of Medicare Explained for 2012. The previous year saw a 52 page increase, or an increase in complexity of nearly 13%. The large increases in complexity for both years were largely driven by changes related to the Patient Protection and Affordable Care Act (aka "ObamaCare").

We see that over time, more and more pages have been required to "explain Medicare", although the real explosion in the government program appears to have taken place since 2007. That coincides with the arrival of a Democratic party majority in Congress, which lasted through 2010.

Although the Democratic party's majority in the U.S. Congress ended, at least in the House of Representatives if not in the Senate or in the White House, the impact of their policies set during their time of full power in office is still being felt through the ongoing increases in rules and regulations affecting Medicare, as ObamaCare will be adding greater levels of complexity to the Medicare program for years yet to come if not altered.