The signature achievement of President Obama's four years of office was the passage of the Patient Protection and Affordable Care Act, a.k.a. "ObamaCare". Passed into law in 2010, and initially upheld as constitutional by the Supreme Court in 2012, ObamaCare has had an ongoing negative effect upon the employment situation in the United States since it was crammed through the House of Representatives and the Senate solely by members of the Democratic party.

Unfortunately for Americans, the ObamaCare job killing spree will only continue and get worse. The reason why has to do with a penalty tax that will be imposed upon all U.S. employers with 50 or more employees who currently provide their employees with what would be considered to be an "average" health insurance coverage plan today.

The Manhattan Institute's Diana Furchtgott-Roth explains how that works:

... if an employer offers insurance, but an employee qualifies for subsidies under the new health care exchanges because the insurance premium exceeds 9.5 percent of his income, his employer pays a penalty of $3,000 per worker. This combination of penalties gives a business a powerful incentive to downsize, replace full-time employees with part-timers, and contract out work to other firms or individuals.

The new law will make it harder for small businesses with 50 or more employees to compete with those with fewer than 50 employees.

When the employer mandates are phased in 2014, many businesses will be motivated to reduce the number of locations and move workers from full-time to part-time status. This will reduce employment still further and curtail the country’s economic growth.

Let's get a sense of how many people that might affect. Today, over 90 million Americans, or 75% of all working Americans, are employed by firms that have 50 or more employees. With the average annual cost of employer-provided health insurance premiums for Single coverage set at $5,615, employers will only avoid ObamaCare's employer penalty head tax of $3,000 for their employees who earn more than $59,105 per year.

That's well above the $39,372 that represents the median income earned by Americans employed full-time, year round in 2011. 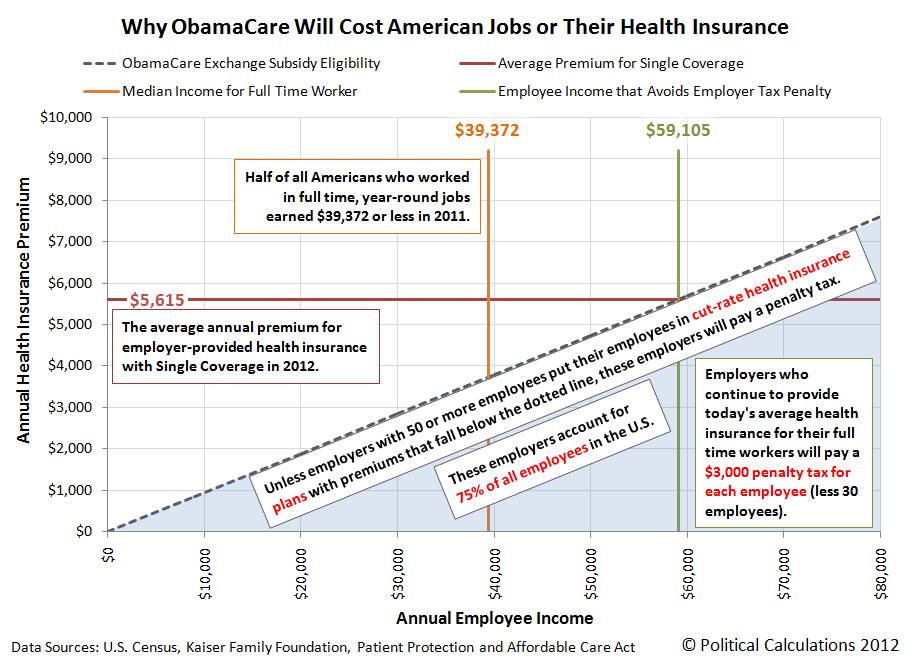 What that means is that MILLIONS of Americans are going to be affected as ObamaCare adds directly to what it costs for their employers to have them on their payrolls.

And since President Obama hasn't done anything for the thousands of businesses that will be stuck with a higher cost of doing business without the additional revenue to pay for it, that means employers are going to have to consider one of the following options:

One way or another, ObamaCare will negatively affect your job or your health insurance.