October 2012 marked a significant event for the S&P 500 - the first time since 1999 that there were more than 400 dividend paying companies in the index!

But what affects the number of companies that pay dividends?

To answer that question, we turned to Standard and Poor's Dividends and Payers report [Excel spreadsheet], which provides the data for the number of dividend paying companies in the S&P for each year since 1980. We've taken that data, combined it with some significant milestones and presented it in the chart below (which is updated from our 2009 post on the topic.) 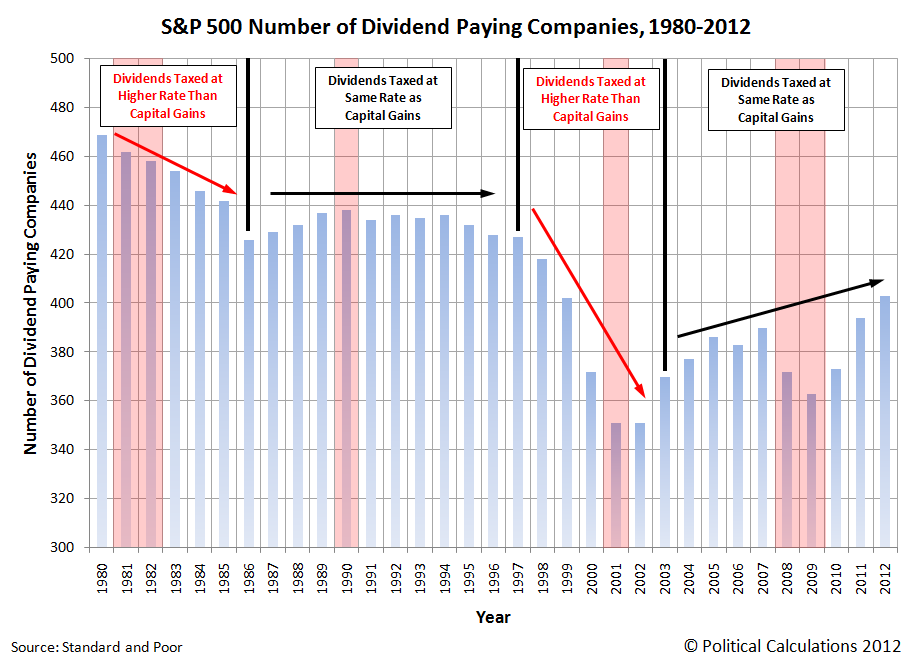 We find that while recessions tend to lower the number of companies paying dividends while they're ongoing, which we would expect, we find that the bigger driver of what affects the number of companies paying dividends to individual shareholders, retirement and pension plans, et cetera would appear to be the relative tax rate of dividends with respect to capital gains.

That stability ended with the Taxpayer Relief Act of 1997. Here, the capital gains tax rate was reduced from 28% to 20%, while the tax rate of dividends was held at the 28% level. As we can see in the chart above, this change in tax law coincided with a dramatic drop in the number of companies within the S&P 500 that paid dividends, which plummeted from 427 in 1997 to 351 in both 2001 and 2002.

That decline wasn't reversed until 2003, with the passage of the Jobs and Growth Tax Relief Reconciliation Act, which once again equalized the tax rates of both capital gains and dividends, but this time at 15%.

But all that is about to end. On 1 January 2013, the tax rate for dividends will rise above that for capital gains - it's only a question of how much.

Thanks to a special tax on dividends and investment income imposed by the Patient Protection and Affordable Care Act of 2010 (aka "ObamaCare"), the tax rate on dividends will at least rise from 15% to 18.6%, while the capital gains tax rate will remain the same. We say "at least" because we don't yet know the resolution for the so-called "fiscal cliff", in which all the tax cuts implemented in the 2003 Jobs and Growth Tax Relief Reconciliation Act are scheduled to expire. If that comes to pass as currently mandated by law, the maximum tax rate upon dividends will rise to 43.8%.

In the best case scenario, without Congress acting to equalize these tax rates, given on what we see in the correlation of the tax rates for both dividends and capital gains, it's very likely that companies paying dividends will begin becoming more scarce in 2013.

In the worst case scenario, the imbalance between dividend and capital gains taxes will lead to significant distortions in the stock market and economy, similar to those that were created by the Taxpayer Relief Act of 1997, which caused the "Dot-Com" stock market bubble, whose inflation and deflation cycles were only ended with the passage of the 2003 tax cuts equalizing those tax rates.

As a policy recommendation, the only outcome that can avoid that kind of economic distortion is for the tax rates for dividends and for capital gains tax rate to be set equal to one another. We don't have much hope for that happening given how much Silicon Valley money backed President Obama in the election. Since they were the primary beneficiaries of the last imbalance between dividend and capital gains tax rates, they may be hoping for a repeat of their economic boom days.

If you think about it, Silicon Valley's digital aristocracy would seem to have a lot in common with a South Pacific cargo cult on this count....