On the first day of 2013, the amount of taxes that top U.S. stock market investors will have to pay on the dividends they earn will increase. The only question at this point is by how much. Will taxes on dividends rise from 15% to 18.8% because of the ObamaCare tax on investment income that will take effect on that date or will dividend taxes rise from 15% to 43.4% thanks to the additional tax increase related to the 2003 Bush-era tax cuts that are currently set to expire after the last day of 2012?

That question matters today because, as expected, influential investors are pushing companies to boost their dividend payouts in December 2012 to beat the clock on the dividend tax increases that will take place in 2013.

Here, because about two-thirds of all the ordinary and qualified dividends that will be subject to the higher dividend taxes are earned by people with household incomes over $250,000, at least if you go by the IRS' tax return statistics for 2009 [Excel spreadsheet], the most recent year for which data is available at this writing, and because these same people who will be most subject to the higher taxes are the ones who have the ability to affect the amount and timing of corporate dividend payments, all investors will be affected by their response to the tax increase. [We should note that this point will likely be lost on the more clueless commenters of Seeking Alpha.]

That brings up an interesting question. Where will the companies that act to boost their dividends in 2012 get the money to pay them?

Today, we can reveal that the companies acting to beat the clock on higher dividend taxes for their shareholders are pulling the money to pay them from the funds that they might otherwise have used to pay dividends in the first quarter of 2013: 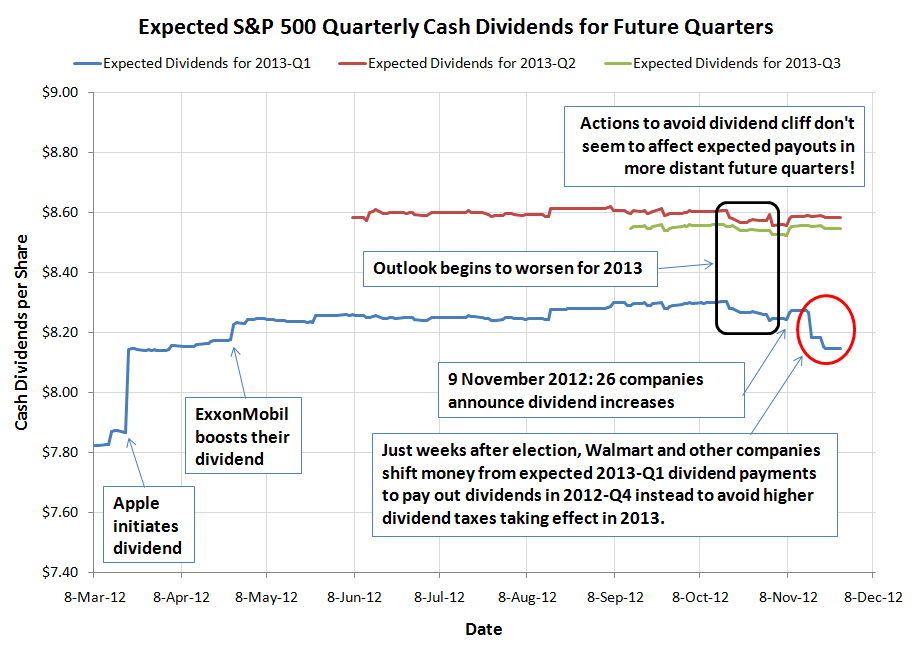 The reason why has to do with the way companies actually accumulate the funds to pay their dividends, where they set aside money well in advance of the dates the payments will be recorded, or transferred to their shareholders. Here, the actual funds to pay out dividends in 2012 are being pulled from the funds that are already being reserved to pay dividends in the first quarter of 2013.

So it's not personal and it's not something that reflects a worsening outlook for the U.S.' economic performance in the first quarter of 2013. It's simply a transfer of income from the future to the present for the purpose of avoiding tomorrow's higher taxes. Exactly the sort of rational actions that we should expect such influential investors to pursue in this situation.

As we close, we should note that these actions related to higher dividend taxes in 2013 are far from over. While the incentives are such that the immediate focus will be for companies to make either higher or special dividend payments in these last weeks of 2012, the ongoing incentives for dividend taxes are such that dividends cuts will be favored in federal tax law. And right now, there's no imperative for companies to rush to announce those kinds of negative changes in their dividend policies until after the end of the year.

Consider this thought experiment. We've shown that companies today are raiding the funds they've set aside to pay dividends to their shareholders in the first quarter of 2013 for the sake of racing to beat the clock on the dividend cliff. Where might they then get the funds to cover the amount of dividends that they are expected to pay out in 2013-Q1 without negatively affecting either the investors or the economy? Will they raid the funds being set aside to pay out dividends in the second quarter of 2013 or might they cut back on their other business expenses? Will they do it all over again when it comes time to pay out dividends in the second quarter of 2013? And what about the third quarter? How long can raiding the future for sustaining the expected benefits of the present continue?

At a certain point, things that cannot continue will stop. In this scenario, cutting dividends to shareholders will be the easiest way for the endless raids on the future to stop. When that happens, a lot of not-so-influential investors who rely on dividend income for things like their retirement or pension income can expect to find themselves worse off as a result of the federal government's actions to increase its taxes on dividends for the highest income earners.

And that's how those with incomes of less than $250,000 per year will share in the price of paying higher dividend taxes. Just because they don't write big checks to the I.R.S. doesn't mean they won't feel the pinch in their pocketbooks....