James Pethokoukis notes the skyrocketing ratio of student loan debt to household income, the currently spiking default rate on student loans, and wonders if a new federal government bailout is in the works:

See where this is heading? When you take into account America’s burgeoning bailout culture and the rising political power of younger voters, it’s no surprise that Citigroup thinks taxpayers might end up riding to the rescue:

Taxpayers already (or will) indirectly subsidize both the housing and healthcare sectors by covering GSE losses and paying for a healthcare system that pays out more than it receives in revenues. If the continued misalignment of educational resources ultimately leads to government “forgiveness” of student loan debt, it will simply be one more example of fiscal subsidies for a narrow demographic.

Citigroup estimates that writing off defaulted student loans would cost $74 billion, though such a move might nudge other borrowers to strategically default in hopes of a bailout of their own. 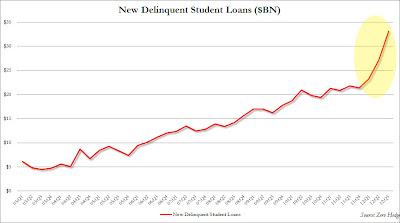 In one fell swoop, it would be possible to both relieve the genuine distress of the excessive debt held by these individuals in such a way that would stop other less-distressed but really opportunistic people from considering strategic defaults on their student loans, thanks to the restrictions and higher costs of future borrowing activity that would be placed upon them in bankruptcy proceedings.

Plus, this reform would have the unique benefit of forcing the undoing of one of the biggest political power grabs of recent years: the federal government's takeover of the student loan industry.

Here, the unspoken goal of President Obama's policy has been to fully exploit the restriction of borrowers from being able to discharge their student loan debts in bankruptcy court as a backdoor means by which he could increase the amount of money that the federal government collects from low and middle income earners. All, we might add, without having to go through the hassle of fighting the political battle that would come from attempting to directly increase their income tax rates.

Just in case you wondered why President Obama has always been so keen to push "cheap" student loans....

That's also why President Obama has been so focused on increasing the tax rates of just those with high incomes, while pushing to keep the Bush-era tax cuts in place for low and middle income earners, even though such a strategy will do very little to reduce the federal government's annual budget deficits or the national debt. Since most income in the United States is actually generated by people who earn much less than $200,000 (or $250,000 per household), the President is simply using the old deceptive magician's trick of distraction in an attempt to keep low and middle class earners from recognizing how much of their income they're really paying in total to the federal government.

It doesn't matter that it's called "debt". If you cannot discharge it in bankruptcy and you owe it to the federal government, which sets the size of your payments according to the amount of your annual income, then the money that you're paying to the government should more properly be called "taxes".

At the very least, the federal government should require student loan borrowers to write that number somewhere in the "taxes you paid" section of their tax returns....