Prompted by the desire to avoid higher taxes on dividends as part of President Obama's desired tax hikes on investment income in 2013, a record number of U.S. companies acted to pay out record levels of dividends in the final quarter of 2012 [Excel spreadsheet] .

And now for the kicker. In December 2012, 93 U.S. companies announced that they would be cutting their regular dividends going forward, also a new record. The previous record of 81 companies announcing dividend cuts in a single month was set in March 2009, as the U.S. stock market was hitting bottom during the "Great Recession".

Our chart below puts the number of dividend cuts being announced in December 2012 into perspective: 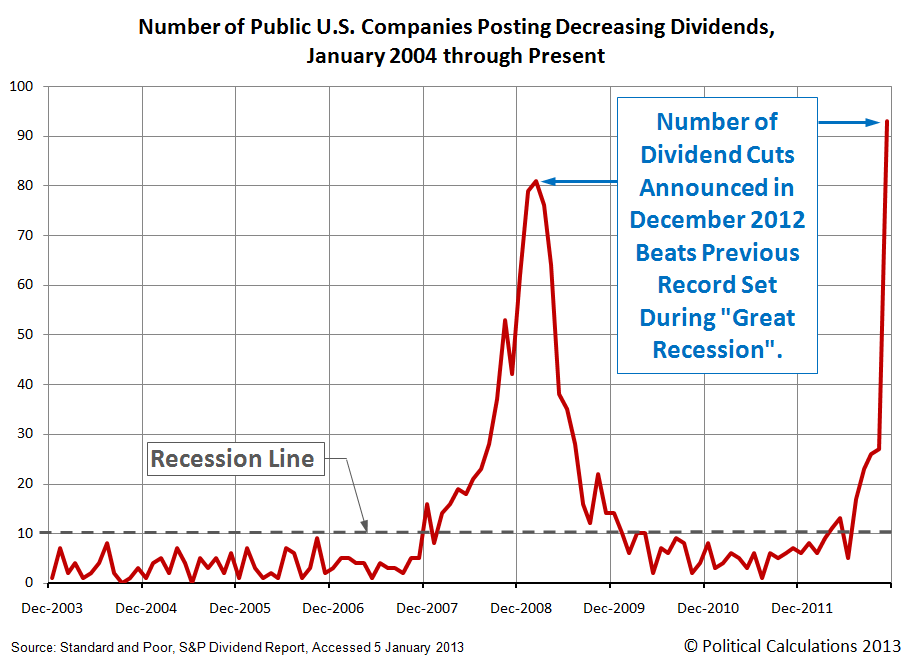 Much of this activity was prompted by the desire of influential investors to avoid higher taxes on dividends, which in the absence of a deal between the U.S. Congress and President Obama, would have meant a top tax rate on dividends of 43.6% in 2013, as opposed to a maximum tax rate of 15% on dividends in 2012. The fiscal cliff deal worked out in the U.S. Senate early in the morning of 1 January 2013 set the maximum tax rates for both dividends and capital gains at 20%, which is further increased by a separate tax increase on investment income of 3.8% as part of the tax hikes mandated by the Patient Protection and Affordable Care Act (aka "ObamaCare"), which then brings the top tax rate on dividends and capital gains up to 23.8%.

The all-time record number of dividend cuts announced in December 2012 represent the outcome of two main forces at work in the economy. First, a large number of U.S. companies have a worsening outlook for their businesses and are acting to preserve their cash flow by reducing their dividend payments to shareholders. Second, a large number of the companies that acted to pay out special dividends before the tax rates on dividends went up on 1 January 2013 have already made the determination that they will be unable to regenerate enough of the funds they were setting aside to pay out dividends at the levels they had originally promised for 2013 from their cash flow and have acted to reduce their dividend payments to shareholders in the future accordingly.

Both factors will put downward pressure on stock prices in 2013, particularly for small and mid-cap companies. Large cap companies like those that make up the S&P 500 will likely fare better, although these companies were not immune from the game of "beat the clock" that was going on in December 2012 for avoiding higher dividend taxes. Our next chart shows the quarterly cash dividends per share for the S&P 500 that have been paid out since the first quarter of 2009, along with the dividends currently expected to be paid out in each quarter in 2013, based upon dividend futures data: 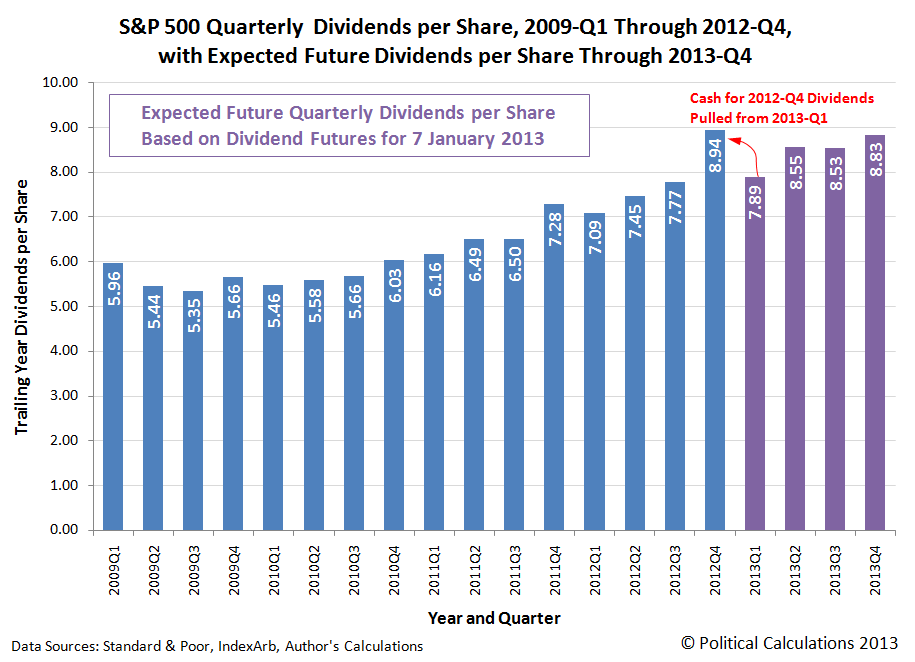 Based on Standard and Poor's estimate of the amount of dividends per share paid out by the companies of the S&P 500 in the fourth quarter of 2012, we now estimate that somewhere between 40 to 60 cents per share was pulled into 2012 from 2013.

Our next chart reveals the downward pressure this action will place upon stock prices in 2013: 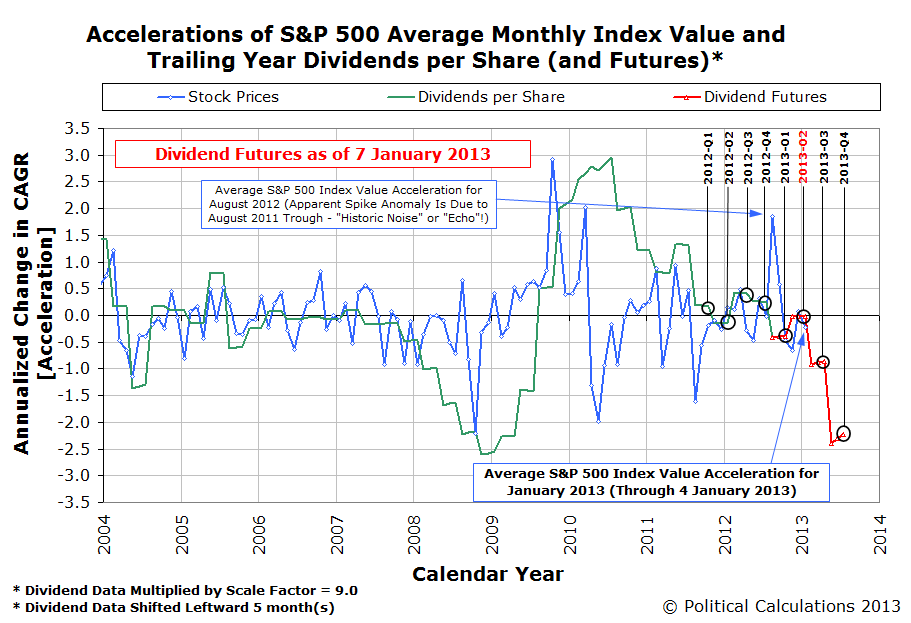 It will take a substantial effort on the part of the Federal Reserve's quantitative easing programs to offset the effect of the negative acceleration of dividends upon stock prices in 2013. We don't believe they will be entirely successful.

Our final chart tracks the history of investor expectations for future S&P 500 trailing twelve month dividends per share (you'll have to bear with us for sentences like this one, as we work in the future, but live in the present for the tax advantages. We refer you to Note #1 for further insight into our grammatical choices): 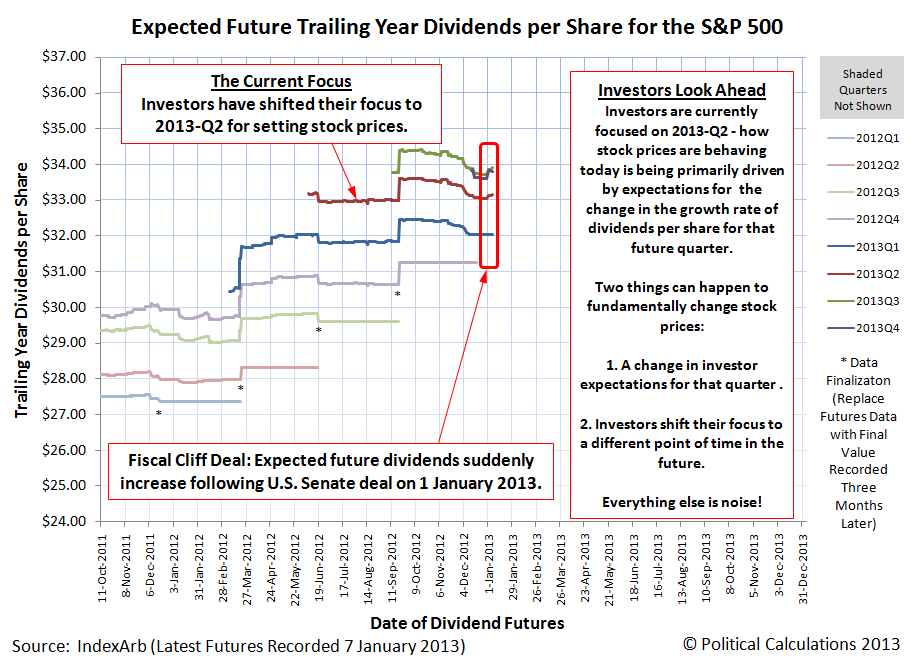 In this chart, we can see the sudden small improvement in investor expectations for the future as a result of the fiscal cliff deal reached on 1 January 2013. We also see a considerable amount of "bunching" between the expected trailing year dividends per share for future quarters, which is an indication of a decelerating economy. A growing economy, by contrast, is indicated by a growing spread between the dividends expected in distant future quarters over time.

If not for the tax avoidance behavior associated with the fiscal cliff situation, we would otherwise call that result a clear indication of a dead-on recession. The U.S. economic situation will be better than that appears, but we fear that 2013 will still be characterized by microrecessions, especially in the first and third quarters of the year.

[1] Yes, we know sentences like that are difficult for many to follow. But as those of us who navigate through the time vortex that is the stock market well know, "tenses are difficult, aren't they?"