We're returning to the cutting edge of the physics that describes how stock prices behave today, as we look backwards and forwards in time to sort out why the U.S. stock market is behaving as it is.

First, let's cover what's going on with the fundamental driver of stock prices: their underlying dividends per share. Our first chart shows what the dividend futures contracts reported by IndexArb indicate that investors are currently expecting to be paid out by S&P 500 companies in 2013: 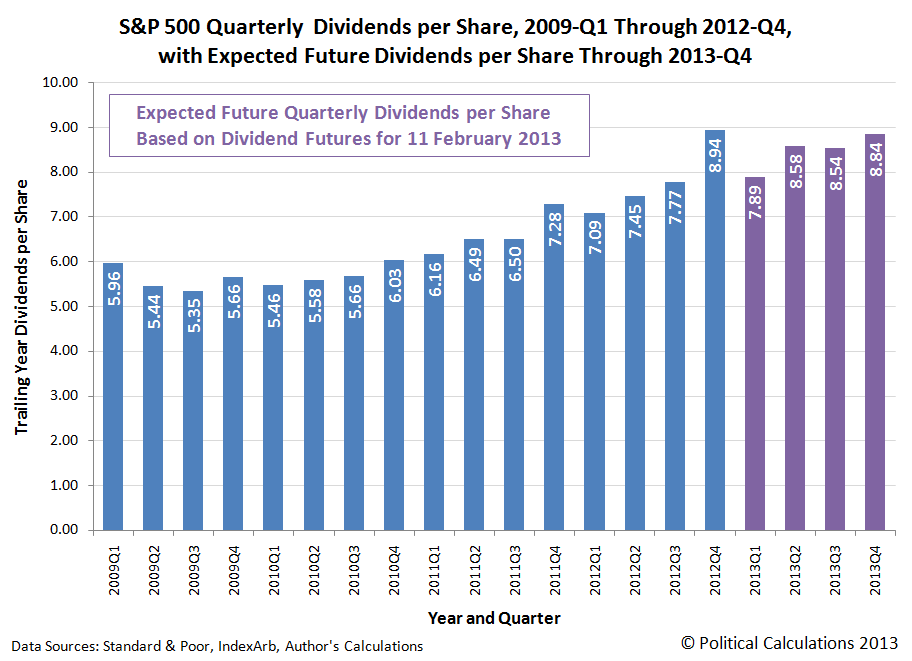 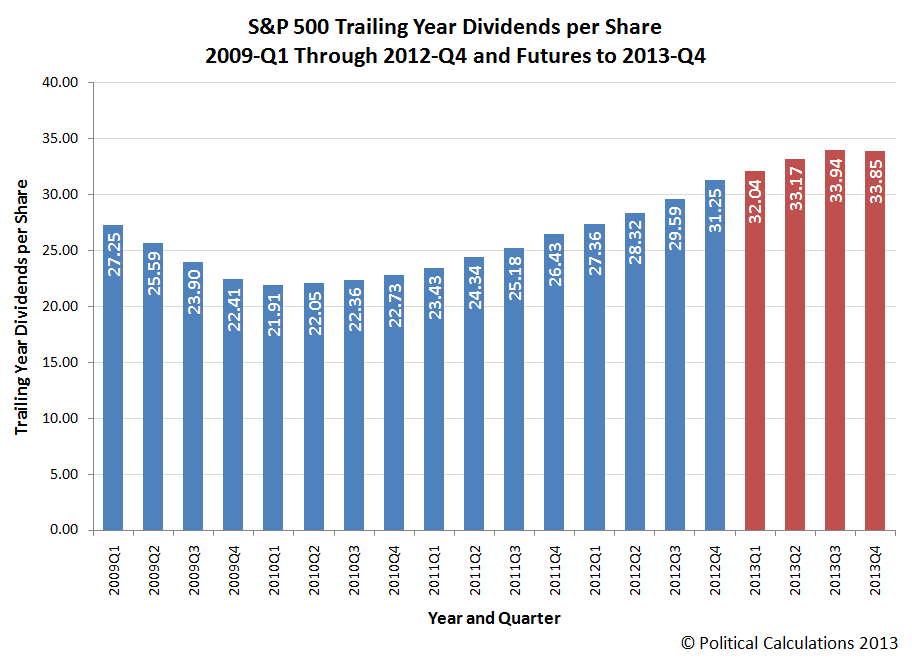 Our next chart shows how the expected future for trailing year dividends per share has changed since 11 October 2011: 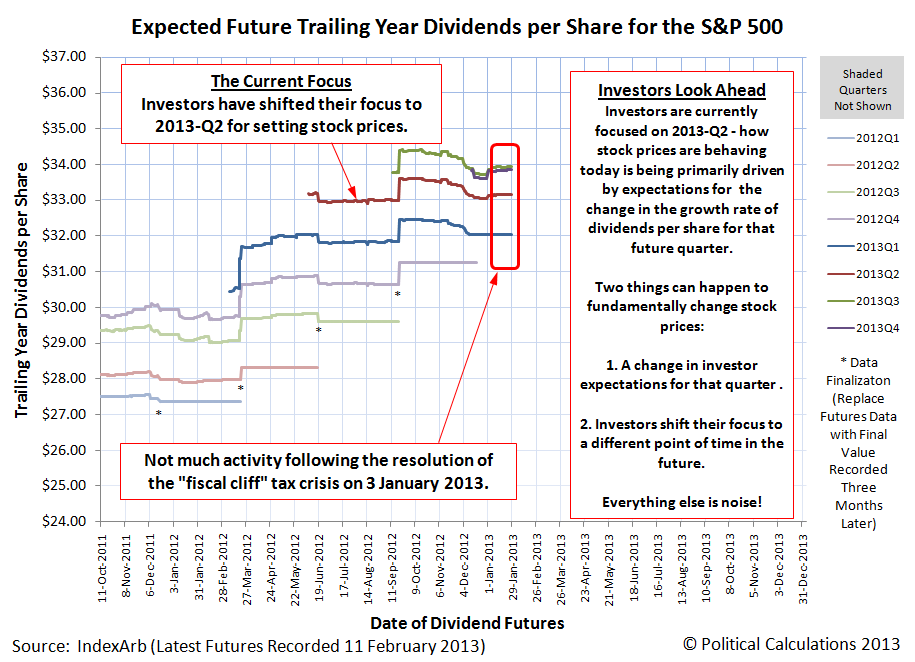 We then worked out the math by which we can use what we know of the expected future for dividends to determine how stock prices today will change.

Normally, we would show the outcome of that math in a chart that covers 10 years worth of data for the S&P 500, in which we would perhaps animate to illustrate the shifts in the future points of time in which investors are focusing their attention in setting stock prices.

Today, we're going to take you right to the cutting edge of what the kind of analysis we've invented here at Political Calculations can do. Our chart below, which we're presenting publicly for the first time, shows how the change in the growth rate of the 20-day moving average of stock prices (which corresponds to a month of trading activity) has evolved since 20 September 2012, when the futures contract for 2012-Q3 expired, with respect to the changes we've recorded in the growth rates of dividends per share for future quarters. 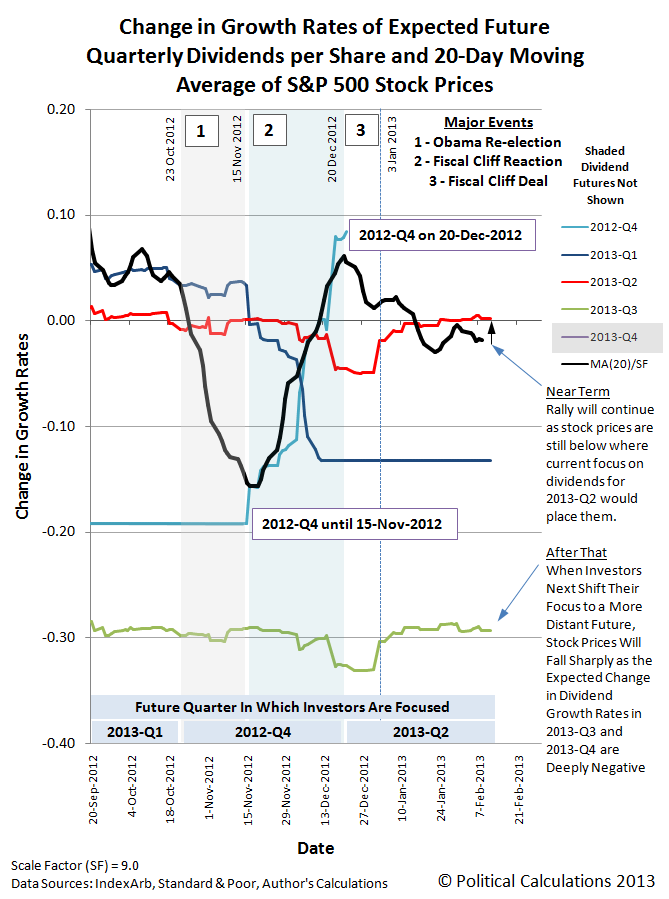 In this chart, we can determine which quarter investors are focusing their attention in setting current day stock prices by identifying the colored trend lines for a given future quarter that the black trend line for stock prices is in closest proximity. We have steadily observed over time that stock prices only deviate from the change in the growth rate of a given future quarter's dividends per share when investors when investors have shifted their focus to a different future quarter, or in the presence of larger than typical quantities of noise in the markets (such as we observed with how asset prices reacted in response to the Federal Reserve's first and second quantitative easing programs, and later with the speculative bubble that preceded Apple's announcement that it would initiate a dividend in March 2012.)

We first observe that investors were focused on the first quarter of 2013 back in September 2012, which continued through 22 October 2012.

As best as we can tell, the event that forced investors to focus back upon the current fourth quarter of 2012 was President Barack Obama's clear victory in the third and final debate over Republican party candidate Mitt Romney on 22 October 2012. In winning the third Presidential campaign debate, investors judged that President Obama had done enough to secure his re-election and would continue his presence in office for another four years.

Elections have consequences, and in this case, the re-election of President Obama would guarantee higher taxes upon investment income far above and beyond their 2012 level, which would take effect on 1 January 2013 - even if no action were taken by either President Obama or the U.S. Congress.

With future tax rate hikes now made certain, the only question left for investors was one of how much they might be increased. The focus on the fourth quarter of 2012 came because any action that companies might take on behalf of their investors interests in avoiding the risk of exposure to President Obama's higher tax rates after the end of the year would have to be made in the current fourth quarter.

That question was never answered by President Obama, who consistently refused to take any leadership in defining how much tax rates would rise on dividends, which put a large number of influential investors at risk of seeing the tax rates on all dividends nearly triple, from 2012's level of 15% to potentially as high as 43.4% in 2013.

The last straw came on 14 November 2012, eight days after the election, when President Obama met with the chief executive officers of a number of large publicly-traded U.S. companies at the White House, as the President once again declined the opportunity to put a ceiling on his tax hike ambitions.

The highly-networked CEOs who attended that ironic, symbolic White House meeting communicated their discouragement to their peers, many of whom began to respond to the increased risk facing their company's major investors by meeting with their boards of directors and gaining approval for major changes in their company's dividend policies that would take effect before the end of the 2012.

The first companies to respond did so after the close of market trading the very next day, on 15 November 2012. For the next month, through 20 December 2012, which was the last day by which companies would be able to act to make a special or extra dividend payments to their investments before the end of the year, many S&P 500 companies acted to pull money they had been reserving to pay dividends throughout 2013, and primarily from their reserves for 2013-Q1, to pay out larger or extra dividend payments by 31 December 2012.

We can see that's exactly what happened in our chart above, where we added the dividends being pulled from each quarter in 2013 to be paid out in the fourth quarter of 2012 instead. Here, we observe that the trajectory of the change in the growth rate of stock prices closely paralleled the announced changes in dividends expected for 2012-Q4, which is what was primarily behind the beginning of the recent rally in stock prices.

The biggest change since then for expected future dividends was the 3 January 2013 resolution of the fiscal cliff tax crisis, which set the maximum tax rate for dividends and capital gains at 23.8%.

At present, the relative level of the change in the growth rate of stock prices with respect to the current focus of investors on 2013-Q2 indicates that the rally in stock prices will continue for a bit longer, although with less steam behind it as compared to the rally sparked by the reaction to the risk presented by fiscal cliff.

Once investors shift their gaze to a more distant future quarter however, we can expect stock prices to fall sharply, as the expected change in the growth rate of trailing year dividends per share for 2013-Q3 and 2013-Q4 are both deeply negative.

Since we don't have super powers and aren't really psychic, even though we have demonstrated an uncanny ability to predict events in the future, what we don't know yet is when investors might shift their focus away from 2013-Q2. All we can tell you is that they will do so no later than 20 June 2013.

The wild card in all this is the Fed's latest generation of quantitative easing (QE) programs, where the U.S. central bank is buying up to $85 billion per month in U.S. Treasury securities and mortgage-backed securities.

In the past, we observed that stock prices decoupled in the positive direction while the Fed operated its previous QE efforts, which we saw take effect within their first months. This time however, we're not seeing any impact on asset prices from the Fed's latest QE program. They may very well be out of gas.

We'll close with our familiar warning: "at least now, you can't say you weren't warned, while you still had time to make plans to deal with it." The cutting edge, it seems, can be pretty unsettling place....