What a weird day for the stock market. And the weirdness started early. Pragamatic Capitalism's Cullen Roche sets the scene:

Here’s a brief rundown of some of the data we saw in the last 12 hours:

So, not a great day for data. And yet the equity markets in Europe were up 1-3% and the S&P is up over 1%. No one I’ve talked to can make a whole lot of sense of this.

The big news in Europe overnight was that the ECB and Germany in particular might be easing on their austerity approach. The Euro tumbled in response and European equities soared despite very weak overall PMI data. So I think it's the Abenomics effect. As the Japanese market rallies higher almost every single day on the back of the "whatever it takes" commitment by the BOJ/MOF, there appears to be a belief that the policy is already working and worth trying elsewhere. It might just be that simple – we’re seeing market participants all over the place capitulating to the power of governments.

Now, that's what we would call a noise event, when the stock market completely goes off in a speculative direction that's not directly supported by a real (or implemented) change in their fundamental outlook, which we measure in the form of the signal provided by their announced expected future level of dividend payments.

As an example of what we mean, what is being called Abenomics is an announced policy in Japan, so it should have an affect on the fundamental outlook of the businesses that make up the Japanese stock market. But if the prospect of a similar approach being adopted in other nations affects stock prices in those nations, without there actually being a corresponding change announced for those nations' economic policies that would actually affect the fundamental outlook for the businesses within their borders, then any change in stock prices driven by such speculation is purely the result of noise. 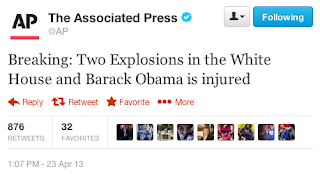 On top of that then, the market got weirder. There was another noise event during the day, this time a negative one, after a "verified" Twitter account operated by the Associated Press was hacked with an announcement that two explosions had occurred at the White House and that President Obama was injured.

The false news hit the wires at 1:07 PM EDT. The market responded to this negative noise event by immediately losing nearly 1% of its value in first three minutes following the false news hitting the wires, then took an additional two minutes after that to fully recover as traders overrode automatic trading programs that had been set to immediately sell stocks as soon as possible in the event that news of a terror attack was made public, after they realized that the news was phony in the absence of other breaking news reports to confirm it.

Reuters describes the trading that occurred during that short window of time: 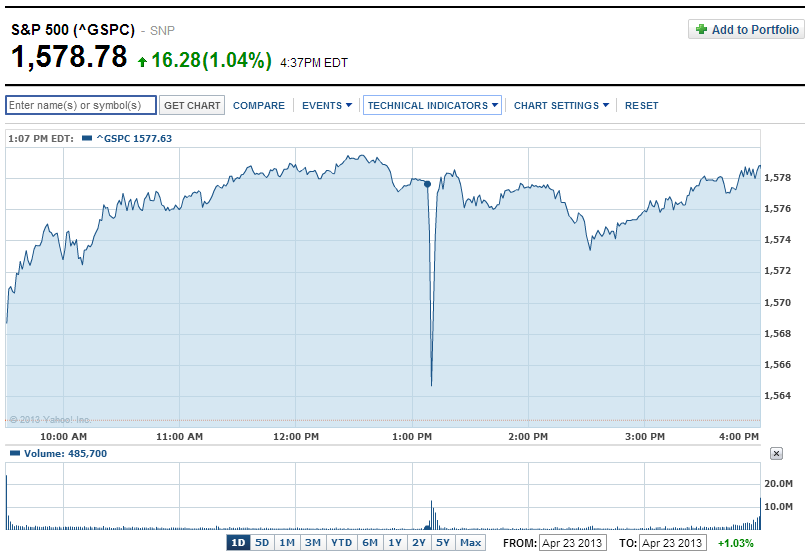 The time to respond to correct the reaction to this unexpected noise event is consistent with what we've frequently observed for the market's response to "ambiguous" news - where analysis by real-life humans is needed to determine a particular course of action in trading. It normally takes anywhere from two to four minutes for the market to respond to news it wasn't expecting, and the response in the automatic selloff reaction certainly fits within that typical window of time.

That stands in contrast to how the noise event began however, as stock prices responded almost instantly to the false news report, which almost gives the impression that traders were expecting the news!

That perhaps is the danger of programming computers to automatically execute trades in certain pre-defined circumstances - where a response is triggered before any sort of confirmation has occurred. At the very least, it appears that some Wall Street quants will be reviewing and perhaps rewriting a good portion of their code for trading pretty soon!

The really bad news however is that this is exactly the sort of thing that draws Congressional attention and government investigations. We're afraid that there's also going to be some very non-value added testimony in the future for a number of trading institutions.

Finally, the day ended with some good news. As many investors have been speculating for some time, Apple is going to boost their dividend by 15%, to $3.05 per share, so the day wasn't completely lost to noise! Since Apple is still the second-largest component of the S&P 500, Apple's action to boost its dividend does lend support for today's otherwise noise-driven increase in the value of stocks.