According to Standard & Poor [Excel Spreadsheet], in March 2013, 73 publicly-traded companies in the U.S. acted to cut their dividends, the most since the all-time record of 93 was set in December 2012. To put those numbers in perspective, in a typical month when the U.S. economy is not being dragged down by recessionary conditions, fewer than 10 companies will act to cut their dividends. 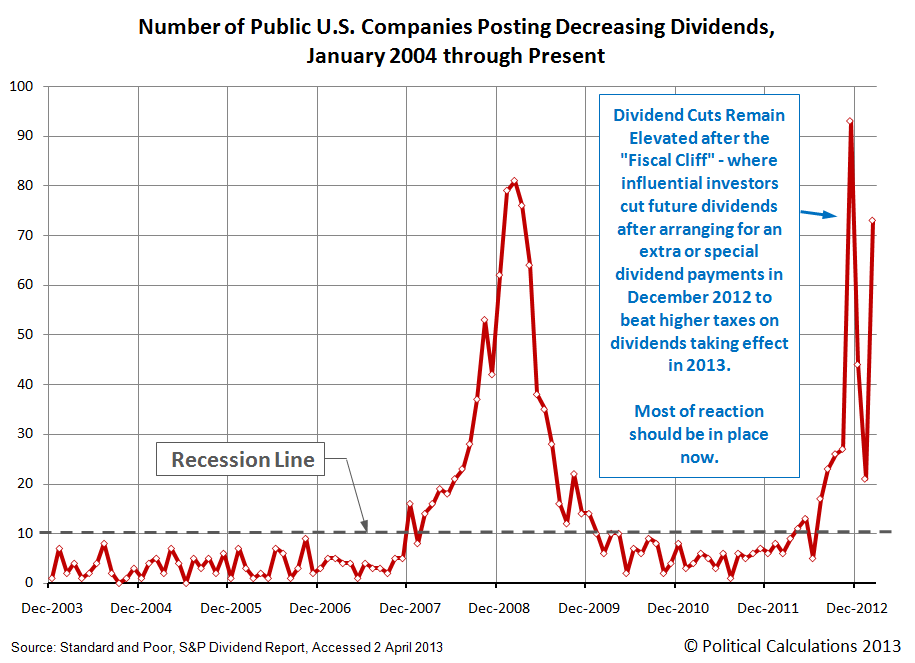 But the U.S. economy is not currently in recession, despite having passed through what we'll describe as a microrecession in the fourth quarter of 2012, which is why the number of dividend cuts was so elevated in the second half of 2012 leading up to December. [By our definition, a microrecession is a period of very slow growth or even outright contraction in an economy that is too limited in scope, severity or duration to qualify as a full-fledged recession.] So something else would appear to be going on.... 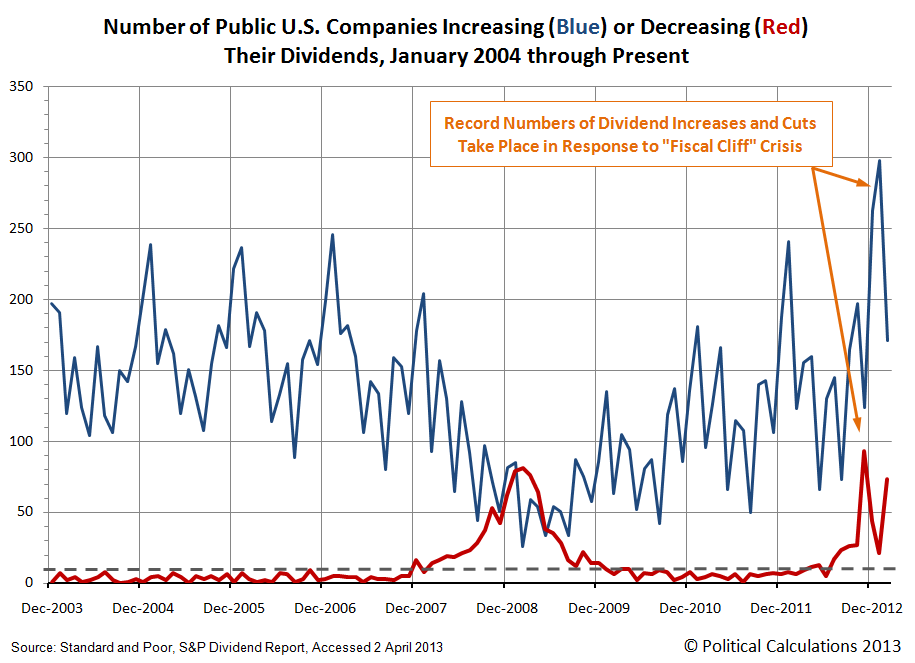 The reason why the number of dividend increases and decreases has gone absolutely haywire in the months from December 2012 through March 2013 has a lot to do with the unintended consequences of the fiscal cliff tax crisis in the United States at the end of December 2012.

Why So Many Dividend Cuts?

Here, following the re-election of President Barack Obama, which ensured that higher tax rates would be imposed upon high income-earning Americans, influential investors began taking money out of the publicly-traded companies they own after 15 November 2012, following the President's meeting that day with a number of prominent U.S. corporate executives, in which President Obama failed to put a ceiling on his tax hike ambitions.

Fearing tax rates on dividends that might more than triple when the Bush-era tax rate of 15% for dividends expired at the end of 2012, the boards of some 711 U.S. companies acted to pay out extra or special dividend payments in November and December of 2012. The equivalent figure for 2011 is 214, which suggests that approximately 497 U.S. companies took this particular tax avoidance action on behalf of their shareholders.

In taking this action, many of these companies tapped the funds they were setting aside to pay regular dividend payments in 2013, primarily from the funds that would be used to pay dividends in the first quarter of that year. In doing so, many of these companies recognized that they would not have enough cash flow to fully regenerate all the funds that would be needed to pay out dividends in 2013 at the levels they had previously indicated they would.

Consequently, they also took the step of cutting their dividends. This explains why the number of dividend cuts spiked in the period from December 2012 through March 2013. Overall, some 231 companies acted to cut their dividends in this period, which compares to 27 companies cutting dividends in the same months of 2011.

With the first quarter now over, we expect that most of the fiscal cliff-driven dividend cuts have now taken place, which means the number of companies cutting their dividends each month will go back to being an indication of the relative health of the U.S. economy, much as it was prior to December 2012.

Why So Many Dividend Increases? 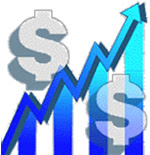 Meanwhile, on 3 January 2013, a deal was reached in the U.S. Congress that put a ceiling of 23.8% on dividends, which represents a 20% tax on dividends plus an additional 3.8% tax that was imposed on dividends earned by high income earners as part of the Patient Protection and Affordable Care Act (a.k.a. "ObamaCare"). At the same time, the top ordinary income tax rate was set at 43.4%, which is the result of combinine the 39.6% top marginal rate and the new 3.8% ObamaCare tax on ordinary income for high income earners.

Here's how that works. With a combined average corporate income and dividend tax rate of 35.8% on the money companies pay out as dividends, taking money in the form of dividends is less costly in taxes than income taken in the form of a salary for people whose ordinary income might place them in the 33%, 35% or the 39.6% tax brackets, which when combined with the new ObamaCare tax on individuals with high levels of ordinary income, can boost the marginal tax rates to as much as 36.8%, 38.8% and 43.4% respectively for these individuals.

And that's why so many companies have acted to boost their dividends in the first quarter of 2013 following the fiscal cliff tax deal. It's not so much that the economy is improving (it is, but not by as much as dividend-driven stock prices would suggest), but rather, because they are the primary means by which the highly productive individuals behind these companies can keep more of the money they earn from the businesses they own and lead.

Risk of Even Higher Taxes Through Lost Deductions

There is one last element affecting the desire of people who have the ability to receive money from their businesses in the form of salary or dividends. President Obama and members of his party in the U.S. Congress are continuing to push to reduce the amount of tax deductions that high income earners can claim on their income tax returns in order to sustain the excessive level of spending the U.S. federal government has established during President Obama's tenure in office.

Because these tax deductions can only offset the portion of their income earned in the form of either wages or salaries, the continuing risk of having their taxes increased through these "hidden" tax hikes would only further incentivise high income earners to take even greater payments from their businesses in the form of dividends instead of salaries.

But then, that's another aspect of Hauser's Law at work today!