There are 10 companies that make up over 18% of the value of the market capitalization-weighted S&P 500 stock market index:

In the last two weeks, 5 of these companies, whose combined market capitalization makes up over 10% of the value of the S&P 500 index have boosted their dividends:

We're making note of these announcements and upcoming events today because we're trying to work out when exactly investors might permanently shift their focus away from the second quarter of 2013 to a more distant future quarter in setting today's stock prices.


After all, just two weeks ago, we had observed that the change in the growth rate of stock prices was beginning to diverge from the level that is consistent with investors focusing on the expected income they could derive from dividends being paid in 2013-Q2.

That changed in the middle of the last week however, on that weird day in the markets, as the forward-looking focus of investors appears to have suddenly snapped back to 2013-Q2: 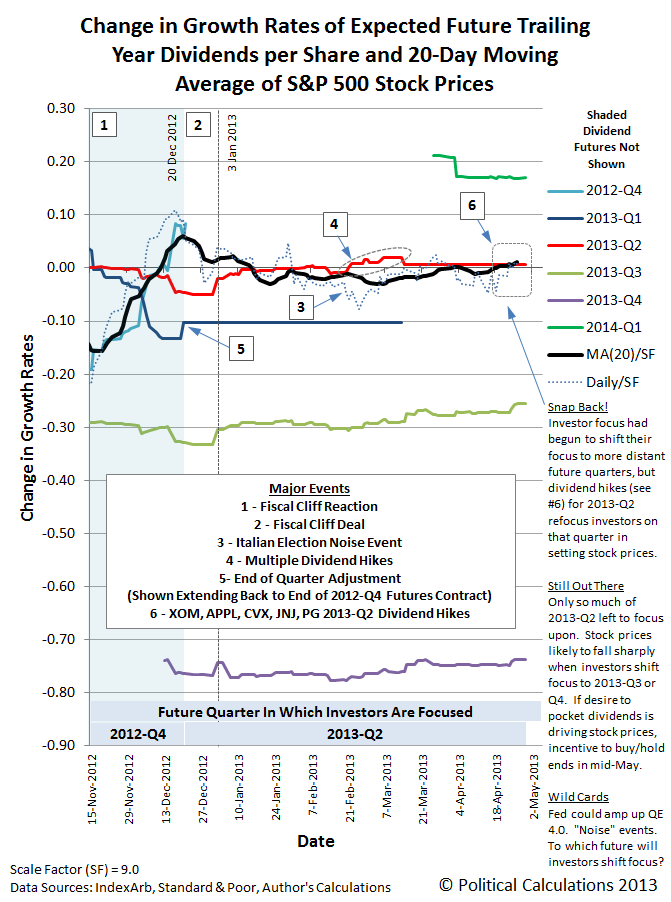 The announced increases in cash dividends to be paid out during the second quarter of 2013 provide an additional incentive for investors to either buy or hold stocks at least through the period in which they would need to be documented as a shareholder of record. For four of the five largest companies of the S&P 500 that have announced dividend increases taking effect in 2013Q2, investors would need to hold their stocks into the third week of May to be able to pocket a large portion of that cash.

After which, if they expect stock prices to fall, it might make more sense to sell while prices are high, then to buy back in later when shares are cheaper. Especially if the expected change in the growth rate of dividends per share in upcoming future quarters is negative.

These incentives could explain some of the dynamics of the "sell in May and go away" phenomenon, which suggests that investors who buy then hold stocks only from November through April have higher returns with less volatility than those who only invest in the May through October period.

CXO Advisory has looked into the phenomenon and compared it to the results of a simple buy-and-hold strategy, with buy-and-hold being a clear winner. However their analysis has investors selling immediately after April each year, although there's nothing in the adage for "selling in May" that spells out exactly when in May investors should sell.

If investors held out for a few weeks longer into May, long enough to be documented as shareholders of record for dividends paid out in the second quarter before acting to sell their shares, then that additional cash would boost their effective returns, which is something that using Robert Shiller's S&P 500 dataset to model the investing strategy wouldn't necessarily capture.

Since dividends for the S&P 500 are also weighted by market capitalization (unlike the index' earnings per share, which are not), it therefore would not take much additional holding of stocks to collect a lot of the extra benefit in cash dividend payments.

That additional gain then might wipe out a lot of perceived advantage of CXO Advisory's buy-and-hold comparison. But it would take some really detailed backtesting to confirm if that is indeed the case, which we'll leave as an exercise for others.