On 30 January 2013, we introduced our tool for determining the percentile ranking of Americans according to their net worth (or net wealth), writing:

We didn't know this until yesterday, but apparently, our "What's Your Income Percentile?" tool is the second most highly ranked result on Google if you search for "household wealth percentile". Which we found out only because someone who works for the Federal Reserve Board came to our site after performing that exact search on Monday, 28 January 2012!

Well, that's not good enough, is it? We want to own the #1 result for that particular Google search and we're going to get it by building a tool that you can use to see how your household's net worth ranks among all U.S. households!

We recently noticed an upsurge in our site traffic, with visitors being drawn to our net worth percentile tool. It turns out that in less than three months time, the tool we developed that day has become the third highest result returned by a Google search for "household wealth percentile"! 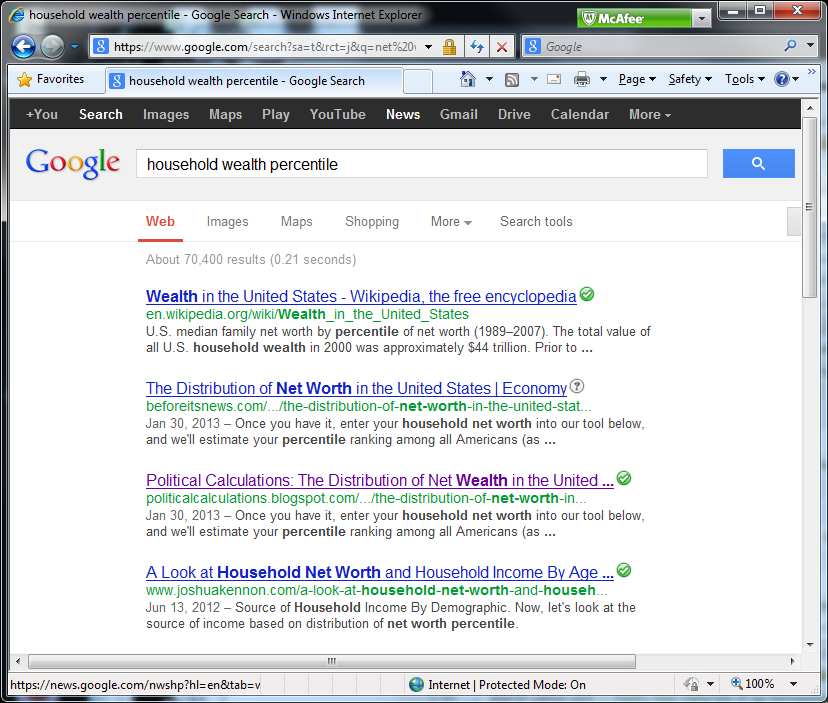 Technically, we also own the #2 result, but that's our post as it appeared at Before It's News, which republishes our RSS site feed, and which doesn't include the JavaScript code needed to make the tool functional.

And to think, we achieved all that without the aid of any so-called "SEO experts"!

Instead, we have to thank all those who made their way to our site and who hopefully discovered something they thought was interesting or useful, then shared what they found with others. Our Google search ranking for "household wealth percentile" can be almost entirely attributed to that process of discovery.

We very much appreciate your finding us! And if you know any bird enthusiasts, be sure to let them know about our long-tail experiment with bird perches!