In 2012, after Spain's government had run up an extraordinary budget deficit in the previous year, the newly elected government of Spain's new prime minister, Mariano Rajoy, committed to both increase the government's revenue and to decrease its spending to put the Spain on a more sound financial footing. Those changes had been demanded by the European Central Bank as a requirement for its continuing to lend money to bail out Spain's fiscally distressed government, which had been put at risk by its bailout of that nation's banks following the collapse of the Spanish housing bubble.

To help put Spain's fiscal situation going into 2012 into context, we're presenting an updated version of the chart we first featured nearly a year ago when we first examined how Spain arrived at that state. The chart shows the relationship between Spain's GDP per capita and its annual government tax collections and expenditures per capita for each year from 2000 through 2011: 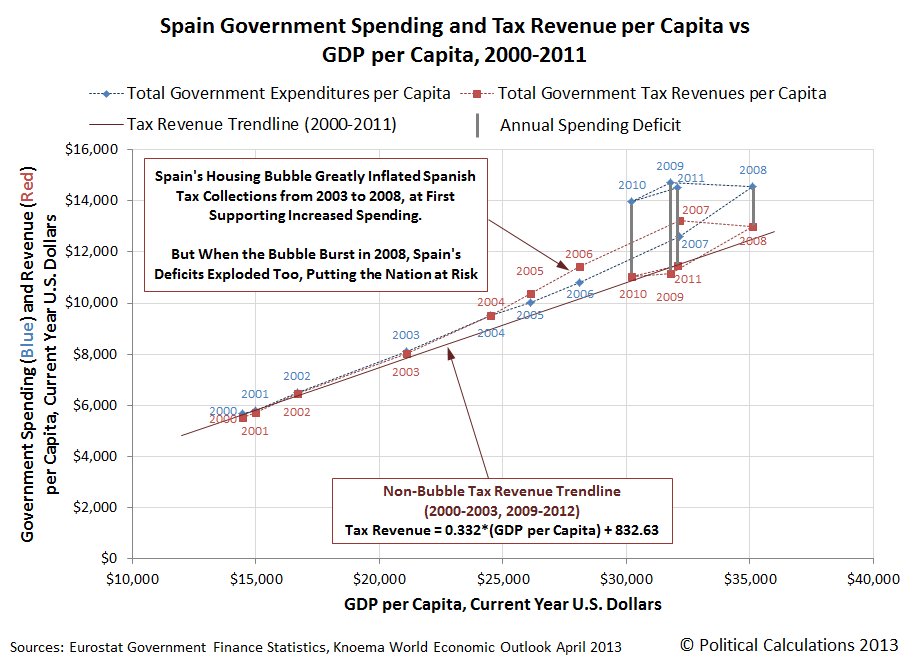 Today, we're going to focus on the revenue side of what happened in Spain in 2012, using data just published within the past month. Starting with Spain's 2012 GDP per capita of $29,288.70 (in terms of U.S. dollars), let's first see how much the Spanish government could have hoped to collect in revenue for that level of GDP if they had kept the same tax rates as Spain had from 2000 through 2011:

Using our tool with Spain's data, we find that if Spain made no changes in its tax rates, the Spanish government could have expected to collect the equivalent of $10,556.48 USD per capita, given its actual 2012 GDP per capita figure. We'll revisit this estimate, based upon Spain's non-economic bubble-related government revenue figures from 2000 to 2003 and 2009 through 2011, shortly....


Soon after it took office, the new government of Prime Minister Mariano Rajoy raised income taxes to curb a swelling budget deficit. We have written before that the by-now conventional wisdom, supported by the International Monetary Fund and others, is that cutting government spending is a more effective way to squeeze budget deficits than raising taxes. Mr. Rajoy's right-leaning government nonetheless chose to raise taxes "temporarily," apparently because it was viewed as socially more equitable than the alternatives.

Our second chart shows how Spain's individual income tax rates changed from 2011 to 2012, which should result in increasing the nation's tax collections by anywhere from 3.0% to 13.5%, depending upon income bracket, where high income earners face much more dramatic tax hikes: Later in 2012, Spain also implemented a surprise rate hike in its value-added tax, from 18% to 21%, which would be sufficient increase the government's take from this source of revenue by 16.7%.

So the range of increases in the government's revenue from these various taxes runs from 3.0% to 22.2%, with the actual net increase in the government's tax collections then depending largely upon the distribution of income in Spain. As you can see from the very progressive nature of most of these tax hikes, the government of Mariano Rajoy went very much out of its way to impose higher taxes on high income earning individuals as part of the "tax the rich" portion of its deficit reduction strategy. And in fact, the Rajoy government predicted that it would collect 4.3% more revenue than the Spanish government collected in 2011.

Our final chart reveals how 2012 actually played out for those expectations: 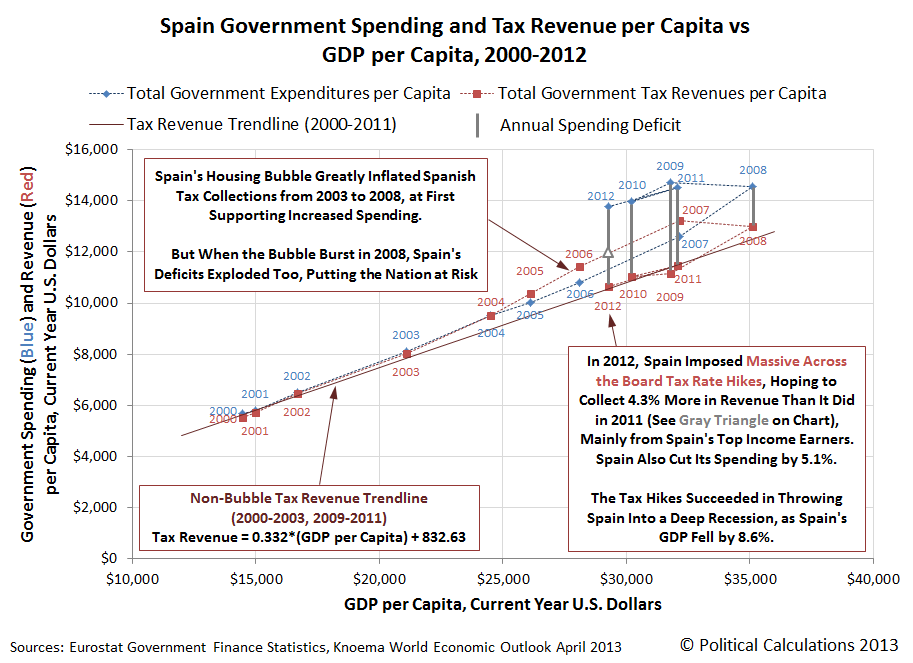 In 2012, Spain's government revenue per capita was actually $10,661.09 USD. Only $104.61 more per person than our estimate of what would be reasonably expected if Spain had not hiked its taxes at all given how Spain's economy performed during the year.

Given the magnitude of the tax hikes that Spain targeted to most affect the country's highest income earners, what this outcome demonstrates is Hauser's Law at work in Spain. Once a government has maximized its revenue collecting capability, it is unable to change how much it collects by imposing higher and higher tax rates on its highest income earning citizens, who generally respond to the increased tax burden placed upon them by no longer generating the same economic activity they did when they were subject to lower tax rates.

That has major consequences, as these individuals are the most capable of generating the kind of economic activity that grows a nation's GDP. Without any ability to affect the European Union's monetary policy to offset the negative effects of Spain's contractionary fiscal policy, Spain paid a very large price to learn that lesson the hard way, as the country became a highly undesirable place to invest time, effort or money for its most productive residents and businesses. Consequently, Spain's economy has crashed to the point where it might reasonably be considered to be in a full economic depression in 2012, which is where it still stands today.

All in all, a pretty clear example of austerity done wrong.