Political Calculations
Unexpectedly Intriguing!
May 28, 2013
Like Waiting for a Train That Will Never Come

How good is the President at predicting how much money the U.S. government will collect in revenue from year to year?

The answer to that question matters because when a U.S. President submits a budget proposal to the U.S. Congress, they are effectively putting the credibility of their economic programs on the line. If their revenue projections repeatedly fall short of what the government actually collects from year to year, it is an indication that either they are not in tune with the changing health of the U.S. economy or that their programs are not capable of promoting the kind of economic performance needed to generate the kind of revenue figures they anticipate. And quite possibly, both.

Let's take a closer look at the recent performance of U.S. Presidents. Our chart shows the amount of revenue forecast by President George W. Bush (dashed lines) and President Barack Obama (solid lines) for each of the U.S. government's fiscal years from 2004 through 2014 (FY2004 through FY2014). 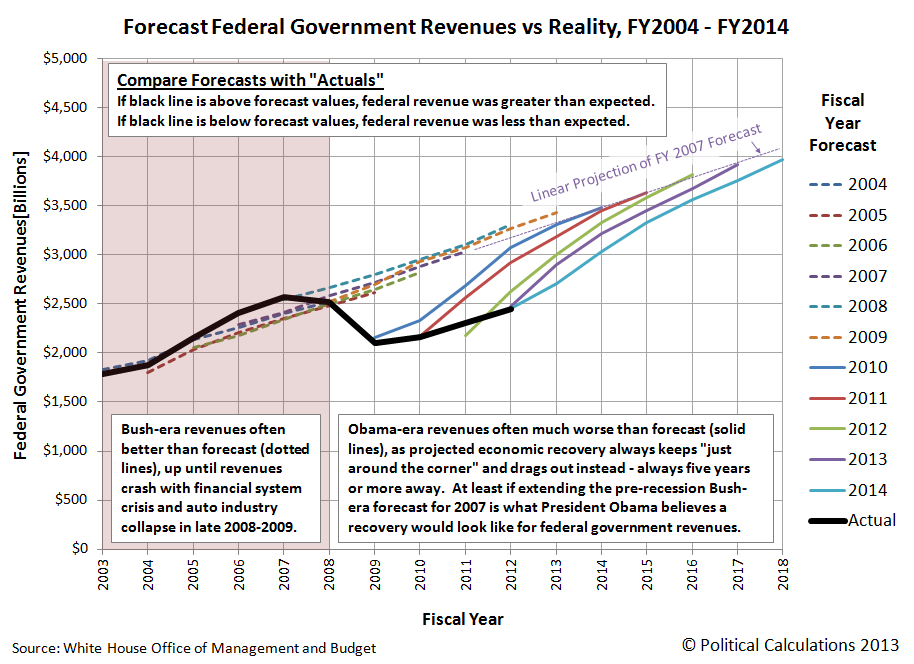 In the chart above, the U.S. President's forecast for a given fiscal year is typically made in February of the previous year. For example, President Bush's budget proposal for FY2009 was released with its projection of the U.S. government's revenues through FY2013 in February 2008, nearly 8 months ahead of when the U.S. federal government's 2009 fiscal year began on 1 October 2008.

We note this particular revenue projection because it turned out to be considerably far off the target. Prior to 2008, President Bush's budget proposals had a high degree of credibility, as the federal government's revenues frequently came in at levels slightly higher than the President had forecast.

But in February 2008, President Bush's revenue projections for FY2009 and beyond failed to anticipate the financial system crisis that would take hold during the year, nor did it anticipate the record spike in oil prices that would subsequently lead to near collapse of the U.S. auto industry by the end of the year. Note the permanent fall in the number of Americans employed by the U.S. automotive industry in the following graph (shown in orange on the scale on the right hand side of the chart): 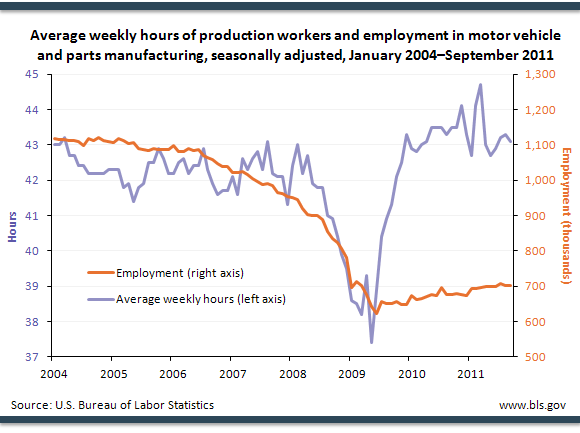 
Consequently, in missing the deteriorating health of the U.S. economy during 2008, President Bush's economic agenda quickly lost its credibility during that year, even though it would have appeared to have been successful in the preceding years.

Meanwhile, President Obama's track record of revenue forecasts indicate that his administration has never had a good handle on accurately assessing the health of the U.S. economy, nor has his economic initiatives been successful in stimulating the kind of economic activity needed to meet his revenue projections. 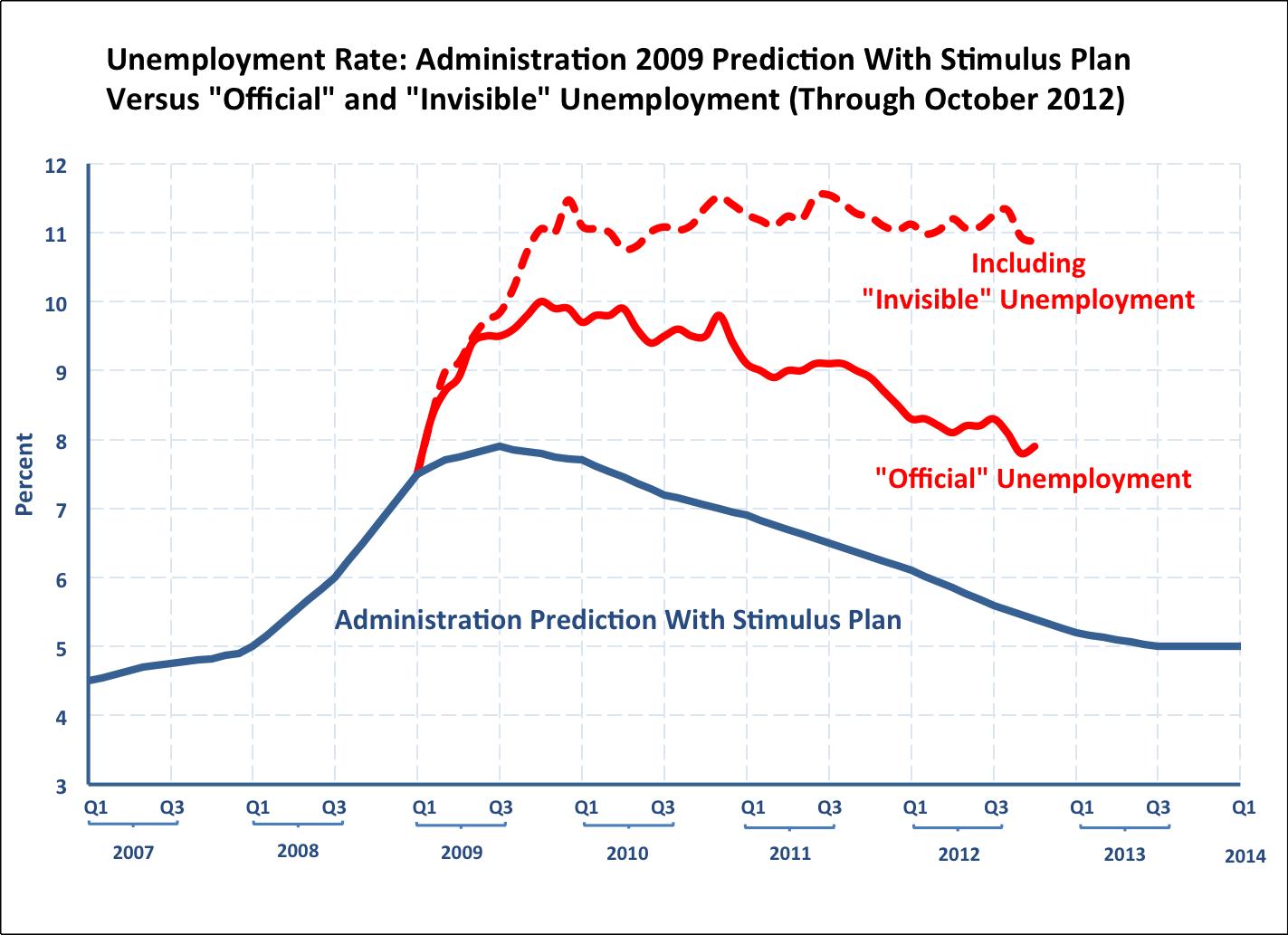 
We can also see President Obama's forecast economic recovery following the 2008-2009 recession progressively get dragged out longer and longer with each year's forecast in our chart. Here, it appears that President Obama has taken a simple straight-line projection of President Bush's revenue projections from the FY2007 budget proposal as his idea of how much revenue the federal government would collect if the U.S. economy were to fully recover from the recession. This straight-line projection then sets the bar for determining how effective President Obama's economic growth programs have been by his own selected standard.

We should note that President Obama has set the bar at a very high level, as the revenue forecasts for President Bush's FY2007 budget proposal was issued in February 2006, just after the peak of the first U.S. housing bubble, in which government revenues were elevated over what they would be in more typical circumstances. 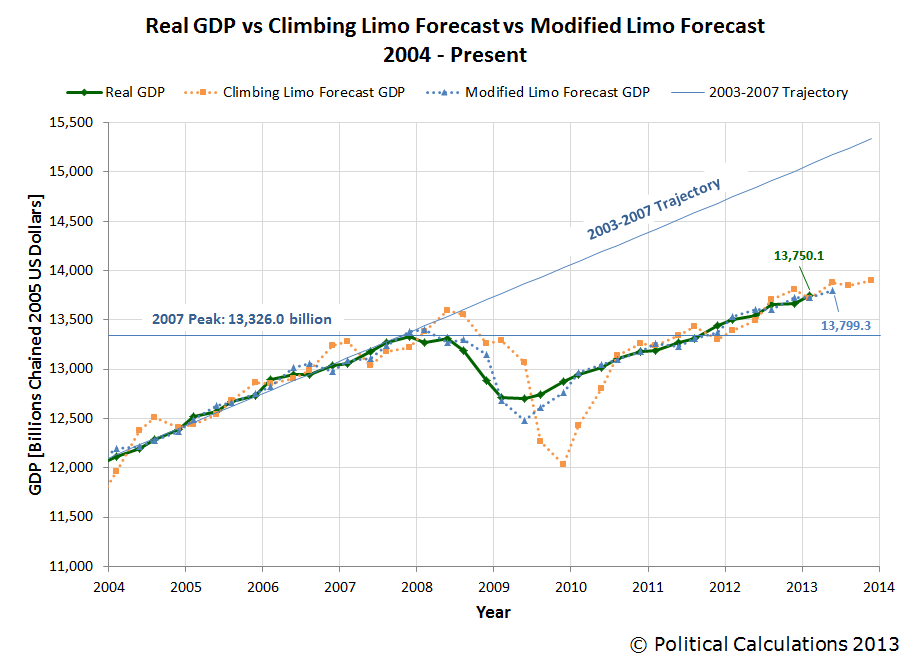 We therefore find that President Obama's economic agenda has never had much credibility, especially when measured against the President's chosen measure of success. Which is perhaps why each of his most recent budget proposals have been dead on arrival on Capitol Hill, as no U.S. Congress has acted to pass any of President Obama's proposed budget measures since 2009, whether the national legislature was fully controlled by the President's own political party, as in 2010, or not.

And that is perhaps the best indication that waiting for President Obama's economic recovery is a lot like waiting for a train that will never come.

The lyrics to the Matchbox 20 song by that name are here. They would seem to fit the political situation with President Obama's economic agenda fairly well.