Over the past several weeks, we've identified three potential wild cards that could affect stock prices in a positive way in the margin of our favorite chart:


In just the last week, we've seen evidence that all three of these wild card factors may be coming into play. Let's take them on in reverse order:

What we call a "noise event" is the stock market's response to speculative factors, which are most often associated with new information becoming known to investors. Things like jobs reports, economic data releases, and even political events are all things that can and do affect stock prices on top of the signal sent by the main driver of stock prices: the sustainable portion of expected future earnings (a.k.a. dividends). Noise is always present in the stock market, but the extent to which it present can vary greatly over time, and one of its main characteristics of a noise or news-driven event is that the response of investors to it will end. It is only ever a question of when.

The apparent surge of stock prices on Friday, 3 May 2013 in response to a better-than-expected U.S. employment situation report would qualify as a noise event. Reuters reports:

The Dow and S&P 500 advanced to all-time closing highs on Friday, with major indexes jumping 1 percent after an unexpectedly strong April jobs report eased concerns about an economic slowdown.

But what if there is something more fundamental underlying the stock market's Friday rally?

Side Note: Yes, we know sentences like this are difficult to parse. It's an unavoidable side effect that comes from our living here at present, which we do for the tax advantages, but spending much of our time otherwise working in the future. As you can imagine, commuting is a problem and at some point, we'll likely make a permanent move to be closer to work. In the meantime, if it helps decipher what we're getting at, stock prices have quantum characteristics, with changes in the rate of growth of stock prices periodically jumping from one discrete "energy level" to another, somewhat like an electron might in a hydrogen atom, but with those energy levels defined by the change in the rate of growth of future dividends per share expected in discrete future quarters. 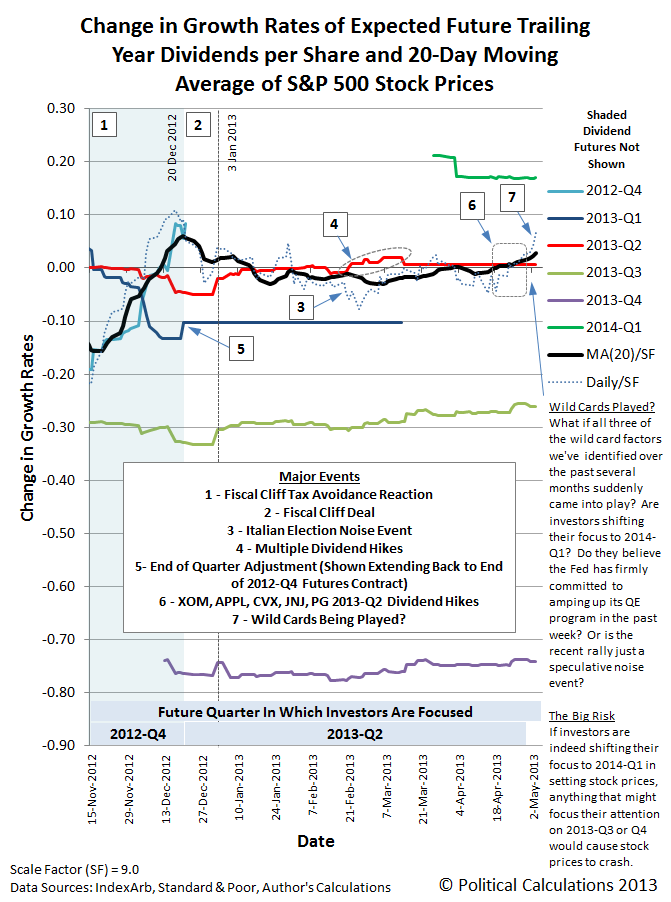 The upside of that kind of shift would be that stock prices would continue rising for an extended period of time. However, that change would also present a large negative risk for investors, as any shift in investor focus to a less distant future quarter would coincide with a massive crash in stock prices. Not even having the U.S. Federal Reserve seriously amp up its quantitative easing programs to offset the impact of a crash would be capable of preventing that outcome.

Speaking of which, the Fed officially opened the door to seriously amping up its quantitative easing programs last week, as documented by the WSJ's brand new Fed Statement Tracker application (HT: Barry Ritholtz):

Since the Fed actually hasn't done anything yet to increase its purchases of U.S. Treasuries above its current rate of $40 billion per month, which is what would be necessary to significantly affect the outlook for stock prices, any positive market reaction to this news would actually represent a noise event.

So that's where we stand going into this Monday, 6 May 2013. We'll find out soon just how much noise has gotten into the stock market!