Two weeks ago, we observed that the Fed's attempts to walk back the damage done by outgoing Fed Chairman Ben Bernanke's comments suggesting that the Fed was moving up the timetable for ending its quantitative easing programs had appeared successful in arresting the declines in U.S. markets, as investors were suddenly forced to shift their forward-looking focus to a much less positive nearer term future. Today, as promised, we'll review just how successful they've been.

Our chart below, which shows the change in the growth rate of U.S. stock prices, as represented by the S&P 500, has changed with respect to the expected changes in the growth rates of trailing year dividends per share of the index for the next four quarters ending in the future (mind the notes in the margin and the changes from previous versions): 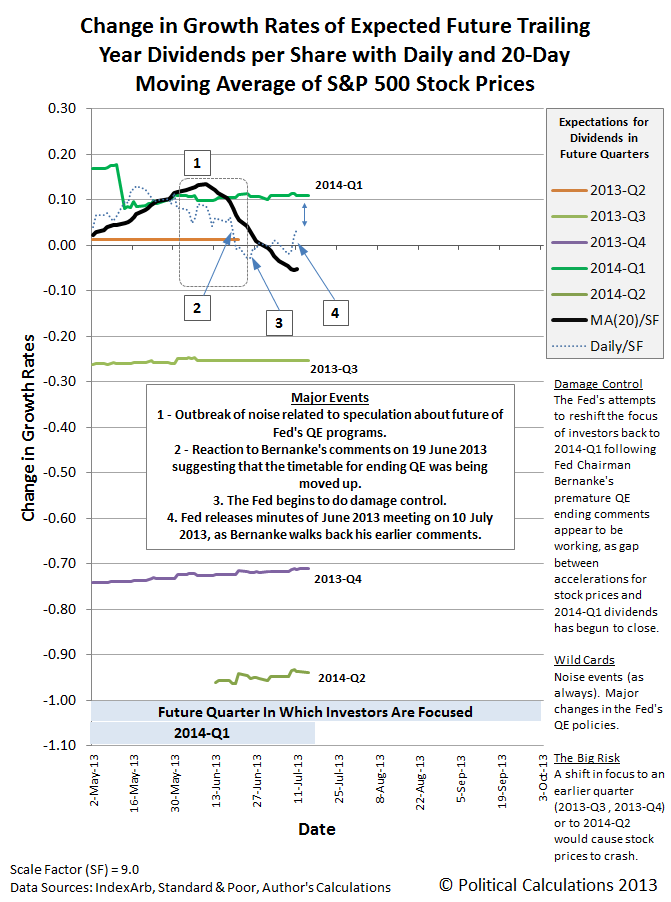 In this chart, we see that after a number of influential Fed officials succeeded in arresting the decline of U.S. stocks through their comments, stock prices held mostly level until the Fed released the minutes from its June 2013 meeting and Fed Chairman Bernanke spoke to the press again on 10 July 2013. This combination of new information for the market appears to have reassured investors that the Fed will not begin any significant tapering its quantitative easing policies in 2013, as the change in the growth rate of stock prices has once again begun to converge with the level that coincides with the expectations investors have for the first quarter of 2014.

We would expect that stock prices will continue to converge with this level in the absence of new, negative noise events. And for now, that means rising stock prices.

"Never Bet Against the Fed"

During what we can now accurately describe as the Bernanke Noise Event, we presented two investing-related posts where we asked "Now Is It Time to Sell?" and "Now What Will You Do?", where we indicated that stock prices were getting set to send, and then sending, a pretty clear "sell signal".

But we never came right out and said "sell"! That's because we recognized very early on that the Fed would have to respond to Chairman Bernanke's unfortunate comments in a way that would re-shift the forward-looking focus of major investors back to 2014-Q1, which would mean that the decline in stock prices would be arrested and stabilized (at least), and potentially recover to much higher levels depending upon how successful the Fed's efforts to walk back its mistake would be.

Why work to focus investors on the first quarter of 2014 in setting their future expectations? Right now, in the absence of good data quantifying the reasonable future expectations of investors beyond 2014-Q2, it was really the only option available to the Fed that doesn't come with a minimum market decline of 30%, which would coincide with a major decline in the economic confidence of Americans, which in turn, would have severely negative consequences for the entire U.S. economy. That's why it won't be until 2014-Q1 at the very earliest that we'll see any tapering in the Fed's quantitative easing programs, when investors will hopefully also have a much less negative alternative future to focus upon.

If there's one lesson that every investor should take to heart it's this: "Never bet against the Fed"! Especially when it needs to act to fix its self-inflicted wounds before its mistakes might cause both markets and the economy to implode.

For the benefit of our NSA readers, or just if you're interested, here's a good part of the electronic trail for how we got here!