Political Calculations
Unexpectedly Intriguing!
18 November 2013
The Anniversary of the Great Dividend Raid of 2012

One year ago, last Friday, the Great Dividend Raid of 2012 began.

The raid was the response of influential investors to President Obama's reelection, which ensured that higher tax rates on both income and investments would take effect on 1 January 2013, an event that is perhaps better known as the Fiscal Cliff. Most of the those tax hikes were tied to the expiration of President George W. Bush's 2001 and 2003 tax cuts and President Obama had made clear to U.S. CEOs on the afternoon of 14 November 2012 that he desired to end.

That set up the situation where the influential investors who own and manage the U.S.' public companies would have to act to beat the clock to avoid facing higher taxes. So they raided the funds that they were setting aside to pay dividends in the first three quarters of 2013 to instead pay out before the end of 2012, where they could avoid being taxed at the higher tax rates that would apply after 31 December 2012.

All that began on 15 November 2012. Prior to that day, stock prices had fallen sharply in response to President Obama's reelection. But that reversed quickly when U.S. companies began announcing they would be paying increased dividends before the end of the year, which sparked a major rally for stock prices.

Believe it or not, we're already seeing the echo of the events that lead up to the Great Dividend Raid and its corresponding stock market rally. Our favorite chart, in which we track the acceleration of stock prices, or rather, the change in the year over year growth rate of stock prices, has been reading much higher values than it should since 6 November 2013: 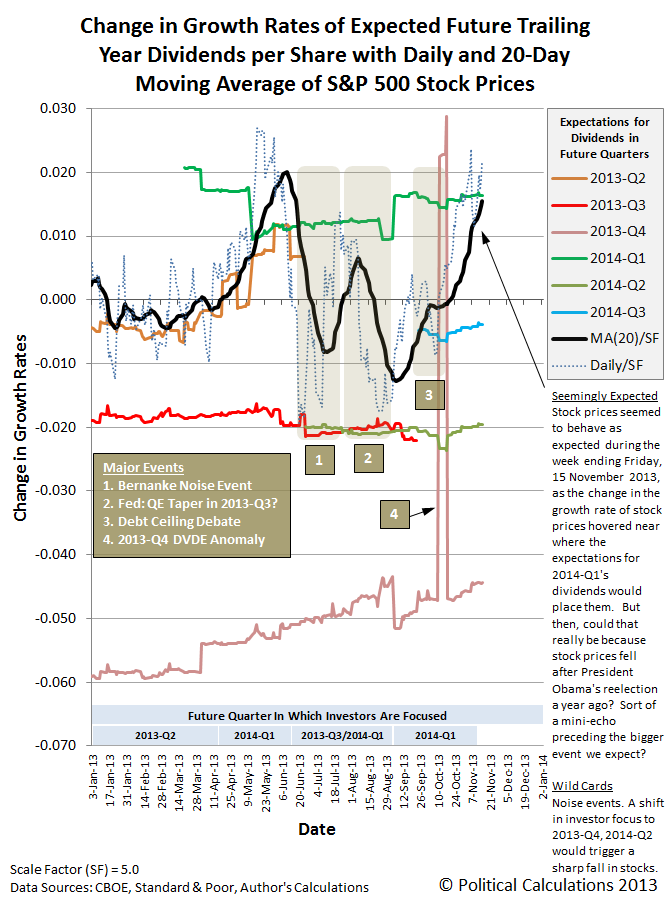 In the chart above, we see that as it would appear that daily stock prices are hovering around the level that the change in the expected year-over-year growth rate of dividends per share in 2014-Q1, which is the point in the future where we've identified that investors have largely been focused since mid-October 2013.

That's significant because it gets at something we were trying to describe last week, where we hypothesized that an echo effect might look like a fundamental shift in the forward-looking focus of investors.

Here, it looks exactly like investors are tightly focused on 2014-Q1, but that's only because stock prices had fallen so much in the week following President Obama's re-election in 2012.

Now, that pattern exists because we use the stock price and dividend data from a year earlier as the base from which we calculate the growth rates of both. To filter out that effect, we can shift that base reference point in our calculations to a different point in the past.

So we've done that. In the chart below, instead of using the year-over-year change in stock prices, we'll instead calculate the change in the annualized growth rates over the preceding six months: 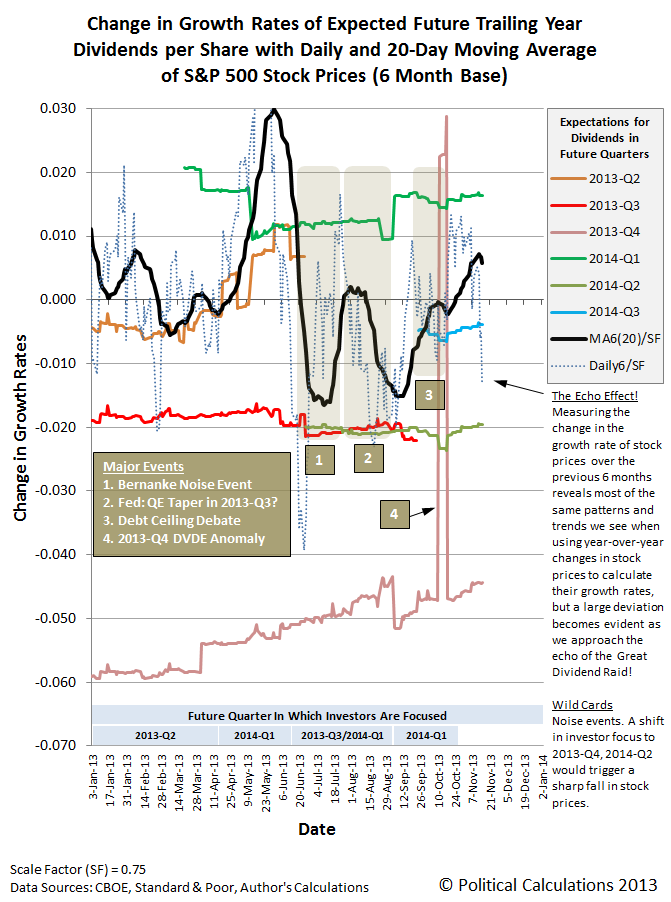 Here, the major patterns and trends are basically the same for each of the major noise events we've tracked in our regular year-over-year chart, except perhaps a bit magnified. But then, during the past week, we see a major divergence develop, where instead of hovering around the level for dividends expected in 2014-Q1, we see that the change in the growth rate of stock prices is falling rather dramatically with respect to our six-month ago base of reference.

The difference between the two would represent the potential magnitude of the echo effect.