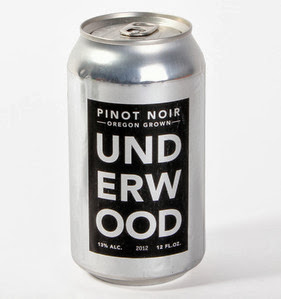 Not long ago, we talked about the innovations in aluminum can technology being developed by craft brewers to improve the drinking experience of their consumers. Today, we're going to consider how winemakers are looking at cans as the potential preferred containment device for their products!

What began as a promotional product for Portland's Feast 2013 food and wine festival, Union Wine Company's wine in 12oz cans will actually be making its way to shelves. Its initial limited edition release drew rave reviews, for both its pretenseless "pinkies down" philosophy and the quality of the wine within. The idea of wine in a can was inspired by Union's company mission to make wine more accessible, and this very well may do the trick.

We found the product to be novel and the experience enjoyable, but we were surprised by how great the wine was—causing us to rethink previous notions about bottling. The cans carry both Underwood Pinot Noir and Pinot Gris, with grapes from across Oregon. Reasonably priced and with the craftsman spirit of the region, the cans are just an added bonus. And if drinking wine from a can isn't your thing, pour it into a glass and let it breathe because the product is deeper than the packaging.

Core77's Rachel Swaby explains how canned wine came to be:

Ryan Harms, the owner of Union Wine Co., is a firm believer in the saying "it takes a lot of good beer to make good wine." He likes the way a beer can feels in your hand and its portability, but he didn't seriously think about canning wine until that rebranding meeting in June. He and his team talked about wanting their products to be accessible, both in the approachability of the varietals' flavors and the ease with which one could grab a drink. They wanted to see their wines included on a backcountry skiing trip or packed for an exploration of Mount Hood. All of a sudden, the can seemed like a viable wine-delivery option.

But the company also had a difficult set of parameters to work within. Wine production is regulated, and wine can only be sold in certain size containers. At the same time, Harms felt very strongly about keeping it in a can that looked and felt like a beer can. That size, he thought, just felt so much more satisfying in the hand than the skinny cans in the energy drink world, which he didn't have any emotional connection to. But the average 12-ounce beer can holds just under an amount that can be put on store shelves. If Union wants a beer can, those cans will actually have to hold 375 milliliters, or 12.68 ounces.

Right away, we see that government regulation provides a serious obstacle to economic development. Instead of being able to simply use the same 12oz cans used by soda and beer producers, winemakers are restricted from that option, which makes it more difficult for them to economically bring such a product to the market - and the product they ultimately do bring to the market will come with a higher cost to consumers as a result. This is a fantastic example of how regulations impose deadweight losses upon the economy, both in preventing a product from being able to easily come onto the market and needlessly making it more costly than it might otherwise be.

And that's on top of the actual considerations for the wine itself - not all wines lend themselves to being served in cans:

Harms is half businessman and half winemaker, and he didn't want the business idea to come at the expense of his craft. But he was also really tied to the everyday can. So he tailored the wine to suit the can instead of the other way around, discounting any varietal that wouldn't do well there. "The types of wine in cans don't need to be decanted or to age for five years to be accessible," says Harms. "That would be a real disservice to put products like that in a can." Wines that do better: "wines from the fresh and fruit-driven world, whether that's white or red."

Because it doesn't have a lot of tannins, the company's Oregon pinot noir fit the bill. For whites, it went with a pinot gris, which has a higher acid level, and is also fruit-driven. For these blends—and the newer-to-wine clientele Union Wine is trying to reach—the can is a fine delivery system, says Harms.

While much of the story revolves around the Union Wine Company's efforts to solve the technical problems of putting wine into aluminum cans, the best part of the story is that it would seem to meet a previously unexplored demand from consumers to have wine available in cans. We'll give the final word to the voice of the customer:

While they figure out the last few details, Harms is taking solace in a comment he overheard at the Feast festival. When a woman in her 70s was offered wine in a can or in a bottle, she chose the can: "I have to have this," she said. "It would be perfect for the golf course."