Well, we now know what it takes to wreck our echo filtering technique: a new noise event!

That event began last Tuesday, 10 December 2013, as stock prices began to fall on the increasing expectation that the Federal Reserve will once again prematurely act to cut back on its current program of buying $255 billion worth of U.S. Treasuries and Mortgage-Backed Securities each quarter, which has been keeping the U.S. economy out of recession.

The new noise threw a monkey wrench into the echo-filtered analysis that we were doing, so since this would have been the last week in which we could have used the methods we developed to account for the effect of 2012's Great Dividend Raid in determining how stock prices are behaving today anyway, we're simply going to dispense with it until we might need it again sometime in the future. In our final update of our chart showing the change in the year-over-year growth rates of dividends per share and stock prices this year, just note that the relative position of stock prices is not really as negative as it would appear.... 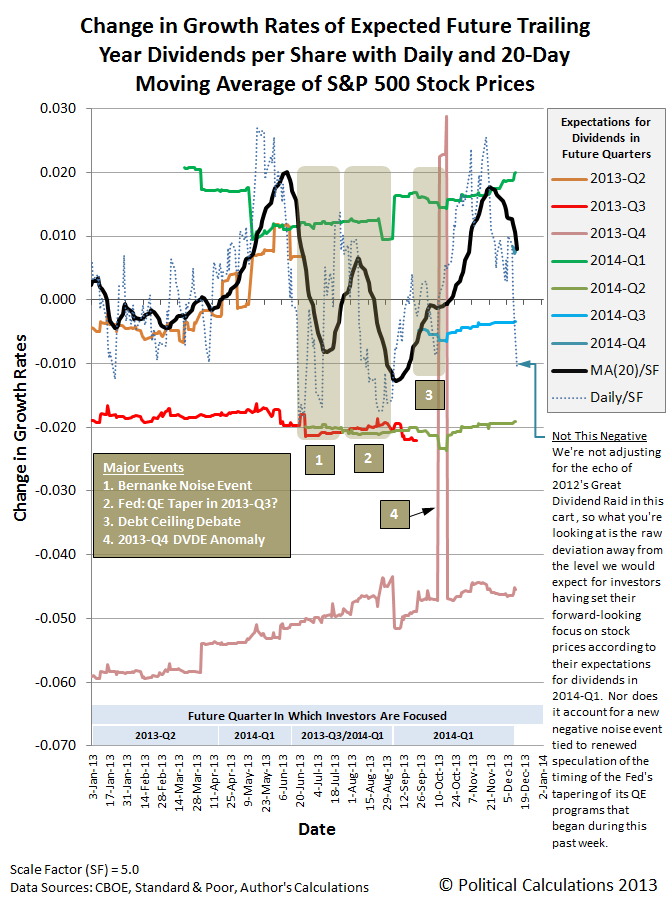 We can also now see all the way through to the end of 2014 with respect to the expected future for dividends (the S&P 500's dividends in 2014-Q4 are currently expected to be near $10 per share, with a total of about $38.64 for all of 2014). The good news is the change in the expected growth rate of dividends in 2014-Q4 is positive, so when investors might turn their forward-looking focus to that quarter, it should be generally beneficial for stock prices in the relative absence of noise.

Looking forward throughout 2014, except for 2014-Q1, the nearer term alternative futures for stock prices are negative. Things that might cause a shift in investor focus to the nearer term, such as the timing and relative magnitude of the tapering of the Fed's quantitative easing programs, will have a negative impact upon the stock market. 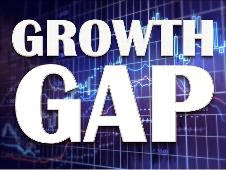 Speaking of which, if the Fed does indeed act to begin tapering its QE programs, the recent budget deal gives it a little bit of room to do so, provided it is implemented in the first quarter of 2014. Although the deal would increase federal government spending by an average of $5.3 billion per month, with the official unemployment rate having fallen well below 7.5%, the nation's GDP can be expected to increased by half that amount each month. Since it appears that the GDP multiplier for the Fed's QE programs is about equal to 1.0, if the Fed were to reduce it's purchases of U.S. Treasures and Mortgage-Backed Securities by no more than $2.7 billion per month, the taper would have a neutral effect on the nation's economy. See update below....

If the Fed reduces their QE program by more than that amount per month however, it will have a negative effect on the U.S. economy, which will mean slower growth in 2014. This effect, of course, is why stock prices fall each and every time the topic of the Fed's potential tapering of its QE programs comes up.

There's another, bigger problem on the horizon however, which probably won't be appreciated until we get close to the end of 2014: the new Obamacare income taxes.

Here, those individuals who are being forced out of their existing health insurance coverage by the Affordable Care Act law, and who either cannot afford to enroll in the more expensive, lower quality (higher deductible) health insurance policies available on the Obamacare exchanges or cannot enroll because of the incompetence of the Obama administration in establishing and running the Obamacare exchanges, will instead be forced to pay higher income taxes.

Although these taxes will likely only fall upon the several million Americans who have been forced out of their existing coverage by the arbitrary mandates of the Affordable Care Act law, the higher taxes they will be required to pay will have a disproportionate and negative effect on the economy unless they are waived. We expect a delayed reaction because many of these taxpayers will not recognize that they will face a really nasty tax hit unless they adjust their income tax withholding to account for their higher Obamacare-driven income taxes in 2014, and will not do so until late in the year, if at all.

That's a topic we'll revisit in 2014. In the very near future, we'll share a solution for how people in this situation can get real and affordable health insurance that can avoid those higher income taxes without having to screw with Obamacare at all....

Update 19 December 2013: We did some back-of-the-envelope analysis on the Fed's taper decision via e-mail yesterday afternoon shortly after the Fed's announcement. Here it is:

Some quick back of the envelope numbers for the Fed's taper decision.

There are two positive economic factors enabling the change in Federal Reserve policy at this time:


1. Falling oil prices - they have fallen about 10% since summer and unlike last year, are likely to hold for a longer period of time thanks to the recent decay in France's economic situation. Here, a 10% decline in the price of oil would boost GDP by a factor of 1.4%.

For U.S. nominal GDP in 2013-Q3 of $16,891 billion, that would be a gain of $236.5 billion over a one-year period, which works out to be $59.1 billion for just one quarter or $19.71 billion per month. The reduction in oil prices in 2013-Q3 is a contributing factor to the re-emergence of organic economic growth in the U.S., although its contribution in that quarter was small compared to the impact of record bumper crops in U.S. agriculture. It will have a bigger impact going forward, particularly for transportation-related industries and automobile manufacturing.

2. The recently concluded budget deal in the Congress will increase federal spending throughout 2014 by roughly $64 billion, which if spread out equally per month would be about $5.3 billion. Per Owyang, Ramey, etc., when the official U.S. unemployment rate is below 7.5%, the GDP multiplier for government spending is 0.5.

That puts the economic boost to GDP for the budget deal at $2.7 billion per month.

Combining the numbers, that's a $22.4 billion per month boost to GDP for these driving factors. The Fed's announced taper is conservative at approximately half that value (at $10 billion per month.) Given the Fed's past practice, that reduction in its asset purchases will take place in the month following the announcement of the change in policy.

Stock prices will rise thanks to the end of uncertainty related to the Fed's near-term intentions for its QE program, and should return to the approximate level they were before 10 December 2013, which is when the latest outbreak of Fed-taper related noise broke out in the stock market.

Combined with the GDP-boosting factors noted above, the Fed's taper is net positive.

And that is why the S&P 500 rose by nearly 30 points to 1810 yesterday. Two points above the level it closed at on 9 December 2013. Merry Christmas from the Fed, who could have played the Grinch instead by announcing a much larger QE taper than they did!