Update 30 April 2014: What you're about to read is our April Fool's Day post for 2014. Our analysis of the events in question is based on the theory we've been developing for how stock prices work, which is why you might find our description of how and why the S&P 500 changed as it did on 26 March 2014 compelling and believable, however we had absolutely no role in either masterminding or controlling those actions!

Yesterday, we indicated that we have been very busy behind the scenes here at Political Calculations during the past week.

That's a bit of an understatement....

That's because last Wednesday, 26 March 2014, we ran a little experiment with the S&P 500. If you were paying attention to the market that day, particularly around mid-day, you might have noticed: 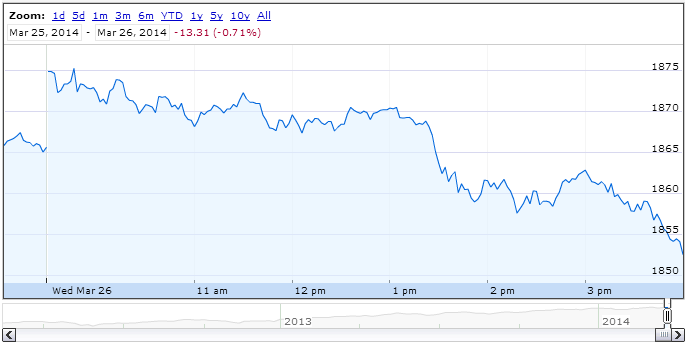 Certainly, a number of traders and CNBC did, as they apparently got "spooked":

After a positive start to Wednesday's session, the stock market took a serious intraday slide that saw it lose more than half a percent in half an hour, and took the S&P from positive to negative on the day.

While an especially strong five-year Treasury note auction is another likely culprit in the intraday decline, many traders blamed the turnaround on a massive bearish options trade on the S&P 500 that was effectively a multibillion-dollar short bet on the market.

Let's take a step back here. Our regular readers are well aware that we have developed a hypothesis that goes a long way toward explaining the behavior of stock prices. Our basic theory is that investors focus their attention on a specific time in the future when making decisions about their investments today. The price of stocks then follows the expectations associated with what investors can reasonably expect to earn through owning stocks at that future point in time.

What they can reasonably expect to earn through owning stocks can be determined by the market's dividend futures. That is important because we have found that the change in the expected growth rate of future dividends per share is often directly proportional to the change in the growth rate of stock prices today, which means that if we know how far ahead investors are looking in making their investment decisions, we can reasonably anticipate how today's stock prices will change - so much so that we can generally place stock prices within a relatively limited range.

What makes this relevant now is because if our theory of how stock prices behave really holds, it would be possible to drive stock prices simply by getting investors to shift their forward-looking focus of a sufficient number of investors from one point in the future to another - one with a different set of expectations - as the mechanism by which we can influence stock prices.

That is all well and good, but there is only so much that we can do to demonstrate whether the theory we've developed holds by simply observing the behavior of stock prices. If we really want to test out our hypothesis, we need to run a controlled experiment - one designed to influence a significant number of investors into changing their forward-looking focus to a different point in the future with very different expectations from the future point in time where they have been focused.

So that's what we did.

Since a put gives its buyer the right, but not the obligation, to sell the underlying security at that given strike price, this implies a bearish bet on the market that will make money if the S&P 500 is below 1,862 (1,995 minus $133) at May expiration.

However, since this trade was deeply "in the money," the trader does not appear to be making a speculative options bet, but rather to be expressing a significant bearish view on the market as a whole. Indeed, this trade is effectively a $2.8 billion short bet on the S&P.

We have to laugh at the "major player" description, but the summary above describes the basic execution of the experiment.

Here, we had been waiting for the volatility associated with the quadruple witching day the Friday beforehand to settle down, because that had depressed stock prices somewhat below that level that would be consistent with investors maintaining a tight and clear focus on 2014-Q3 in setting stock prices and we needed them to return near that level so the outcome of what we would be doing would not be greatly affected by that source of noise.

That base reference level of a future defined by the expectations of 2014-Q3 was effectively set for us by Janet Yellen's comments during her first press conference as Federal Reserve Chair, which had motivated large numbers of investors to collectively focus on that future quarter in setting stock prices.

The waiting ended early on 26 March 2014, as the S&P 500 had gapped upward by 13 points from the previous day's closing value to open and held steady at that level throughout most of the morning. To upset that apparent stability, we needed to shift the attention of a significant number of investors away from focusing on that quarter to instead focus on either the nearer term future defined by 2014-Q2's expectations or the more distant future represented by 2014-Q4, both of which would suit our purposes.

Ultimately, we opted for the nearer term future defined by 2014-Q2. The reason why we selected this quarter is because we believed it would be easier to achieve a statistically significant result.

Here, since the expectations for dividends for 2014-Q2 are more negative than they are for 2014-Q3, successfully shifting the forward-looking focus of investors to this quarter would drive stock prices lower, as stocks would be less desirable to hold. 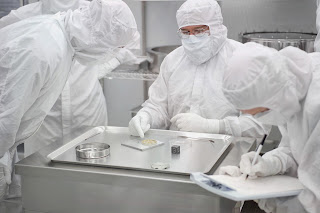 Resetting the forward-looking focus of investors to a more negative point of time in the future was also important because the money that would be involved in making the transactions that would result was already available in the market. If we had instead chosen to focus investors on the much more positive expectations associated with 2014-Q4, in addition to requiring more effort on our part, it would also risk not having a significant enough response because of the transactional frictions involved (where getting a sufficient response might require investors to liquidate other investments - this a big reason why stock prices are often quick to fall and slower to rise.)

We wish we could claim credit for the idea of using the strike put options to achieve the desired shift in focus to 2014-Q2, but that really belongs to others. And while it would have made a much bigger splash if it had all been done in one trade, for our purposes, it was more important to have the trade broken out into smaller pieces, which would serve as a means of getting a larger number of traders to focus their attention in on the more negative future associated with 2014-Q2.

As for the amounts involved for the trades, well, let's just say that it was sufficient to "reverse" the open, as the market closed down the same number of points from the previous day's trade that it had originally gapped up to open the day. It also kept the day's closing value for the S&P 500 within the expected range that would be still be consistent with a majority of investors maintaining their focus on 2014-Q3.

That's also important because we weren't looking to make a lasting impact, as the overall trade was designed to be neutral, if a bit asymmetric in how the news of the trades were communicated to market participants:

As traders started to notice the options trade, word got around that the buyer of the puts also bought the S&P futures at the same time. That would make this a very different sort of trade, which a firm would put on not to express a bearish thesis, but more likely to square an options trading book that was heavily short options.

If a firm is short more options than it is long, that leads it to collect less premium than it could otherwise, due to the cut of premium that clearing firms take.

"From what I'm being told, this trade was neutral, so there is not going to be an impact from the standpoint of a large amount of futures for sale," said David Seaburg, head of equity sales trading at Cowen & Co.

Beyond demonstrating our basic hypothesis, we also learned from our experiment that you can most certainly have a lot of fun with 200 million dollars. And that you can have even more fun with that kind of money when it's not yours and nobody can prove you did. If you design an experiment properly, it's a small price to pay to learn quite a lot about how to drive stock prices where you want them to go.

But then, that's also impossible isn't it?

Finally, if there's anyone out there who might be upset by all this or are still "spooked", just remember Dr. Clayton Forrester's most memorable quote: "It's supposed to hurt. It's science!"