Now that we've had to go to some effort to work out how the median household income in the U.S. has evolved over the last several months from payroll tax collection data, we're going to put those estimates to work today to get a better insight into the U.S. real estate market for new homes.

What we found suggests that September 2014 wasn't as positive as some news reports have claimed. Here, reports that the number of new single family homes reached a six year high in September would suggest that things are going swimmingly for the new home market in the U.S.

The problem is that the median sales price for new homes in the U.S. would initially appear to have fallen to $259,000 in September 2014 from a revised level of $286,800 in August 2014, an apparent decline of $27,800. While that initial $259,000 figure will almost certainly be revised higher, as the sales of higher priced homes during a given month often take longer to be incorporated in the official data, the combination of falling price and increased quantity would suggest that the median sale price fell because new home builders were forced to make big discounts because they found that they needed to move a relatively higher level of inventory.

We would have to go back to October 2010 to find a similar magnitude month over month decline in the raw data for median new home sale prices.

That decline in the median sale prices for new homes shows up when we account for the seasonality of the U.S. real estate market by calculating their trailing twelve month average and projecting the value against median household income: 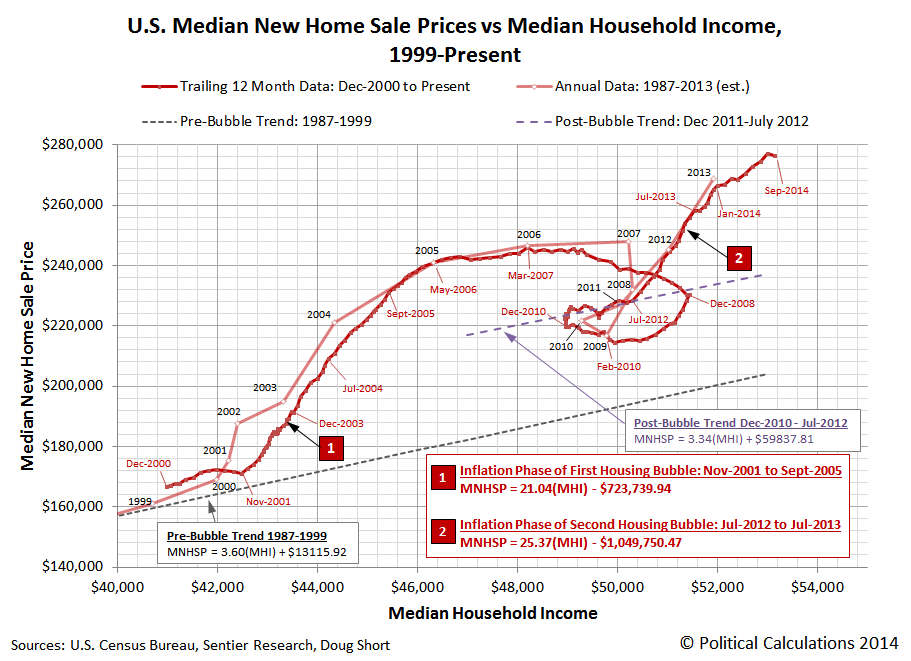 That sudden decline may account for the sudden momentum by the political cronies of government-supported home lenders to significantly loosen lending standards for mortgages - in a way, it's like fanning the flames of a fading fire in attempting to get it to burn brighter for a little longer. We're going to quote Warren Meyer's full reaction to that change in policy, simply because we can't make the point any better:

I am not sure there was ever any excuse for considering a 97% loan-to-value mortgage as "sensible" or "responsible." After all, even without a drop in the market, the buyer is likely underwater on day one (net of real estate commissions). Perhaps for someone who is very wealthy, whose income is an order of magnitude or two higher than the payments, this might be justifiable, but in fact these loans tend to get targeted at the most marginal of buyers.

But how can this possibly make sense when just 5 years ago the financial markets collapsed in large part due to these risky mortgages? Quasi-public, now fully public guarantors Fannie and Freddie had to be bailed out by taxpayers with hundreds of billions of dollars. There are still a non-trivial number of people trapped deep underwater in such mortgages, still facing foreclosure or trying to engineer a short sale after seeing the small bits of equity they invested swamped by a falling housing market.

But, here they go again: Fannie and Freddie, now fully backed by the taxpayer, are ready to rush out and re-inflate a financial bubble by making what are effectively nothing-down loans:

Federal Housing Finance Agency Director Mel Watt has one heck of a sense of humor. How else to explain his choice of a Las Vegas casino as the venue for his Monday announcement that he’s revving up Fannie Mae and Freddie Mac to enable more risky mortgage loans? History says the joke will be on taxpayers when this federal gamble ends the same way previous ones did.

At his live appearance at Sin City’s Mandalay Bay, Mr. Watt told a crowd of mortgage bankers that “to increase access for creditworthy but lower-wealth borrowers,” his agency is working with Fan and Fred “to develop sensible and responsible guidelines for mortgages with loan-to-value ratios between 95 and 97%.”

The incredible part is that the Obama administration is justifying this based on all the people still underwater from the last time such loans were written. The logic, if one can call it that, is to try to re-inflate the housing market now, and worry about the consequences -- never, I guess. Politicians have an amazing capacity to mindlessly kick the can down the road, where short-term is the next morning's papers and unimaginably far in the distant future is after their next election.

On the bright side, the eventual failure that will be blamed on the market is not being left to chance, nor is the great personal wealth being quietly accumulated by political insiders and their family members.

So at least the full extent of the stupidity involved has been catalogued for future reference.

Sentier Research. Household Income Trends: July 2014. [PDF Document]. Accessed 3 September 2014. [Note: We have converted all the older inflation-adjusted values presented in this source to be in terms of their original, nominal values (a.k.a. "current U.S. dollars") for use in our charts, which means that we have a true apples-to-apples basis for pairing this data with the median new home sale price data reported by the U.S. Census Bureau.]