Political Calculations
Unexpectedly Intriguing!
03 November 2014
The S&P 500 Potentially Sets Itself Up for a Fall

We're having fun this week because the market did something different from what we projected it would last week, making for a more interesting market environment than we had hoped for! Here's the first part of what we projected:

Looking forward through the next two weeks, we would anticipate that in the absence of noise or an announcement from the Fed specifying that they will begin hiking short term interest rates in 2015-Q2, which would prompt a shift in focus, investors will remain primarily focused on 2015-Q3 in setting their expectations as they set stock prices.

Our model would appear to project a very short term dip in stock prices in this upcoming week, with a short rally in stock prices in the following week. These are actually artifacts of our use of historic stock price data as the baseline reference points from which we project the future trajectory of stock prices, which are the result of echoes from short term noise events of a year ago - much like the one day rally was on 8 October 2014 and also the one day dip of 22 October 2014. We would anticipate that the actual trajectory of stock prices will more closely connect the "dots" on the opposite sides of both projected "events".

That part of our prediction held through Wednesday, 29 October 2014, as investors locked their focus like a laser beam on the expectations associated with 2015-Q3 in setting stock prices. But then, after the Fed made its announcement committing to end its current Quantitative Easing (QE) bond buying programs on that Wednesday, that changed: 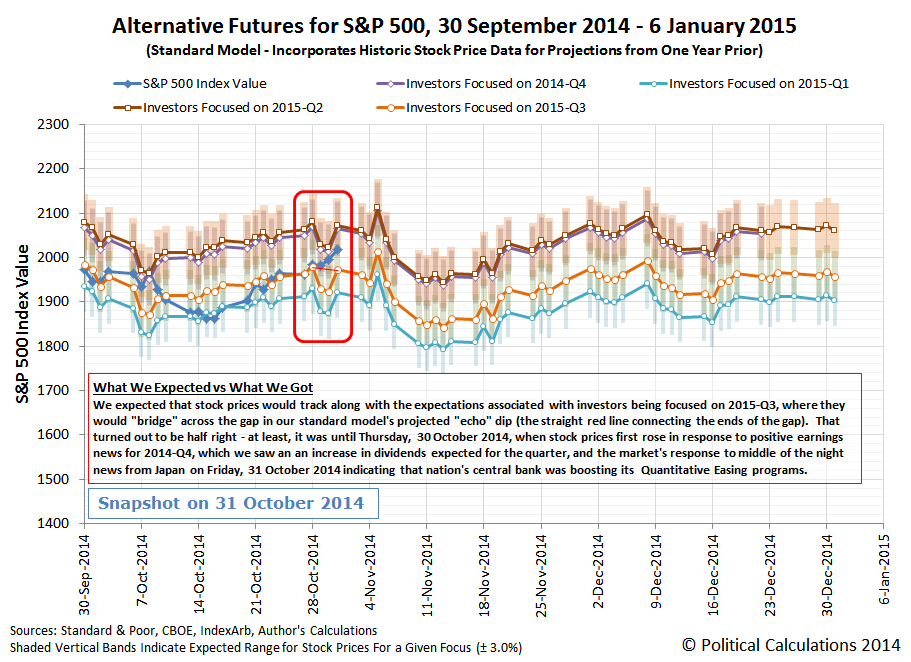 After the Fed's announcement, investors reacted to positive earnings news for 2014-Q4, shifting a portion of their focus to the current quarter, which we know is the case because the expectations for the amount of dividends to be paid in 2014-Q4 increased beginning on Thursday, 30 October 2014, which we see reflected by the uptick for the change in the expected year-over-year growth rate for the S&P 500's trailing year dividends per share for that quarter (the future of which is still being shaped): 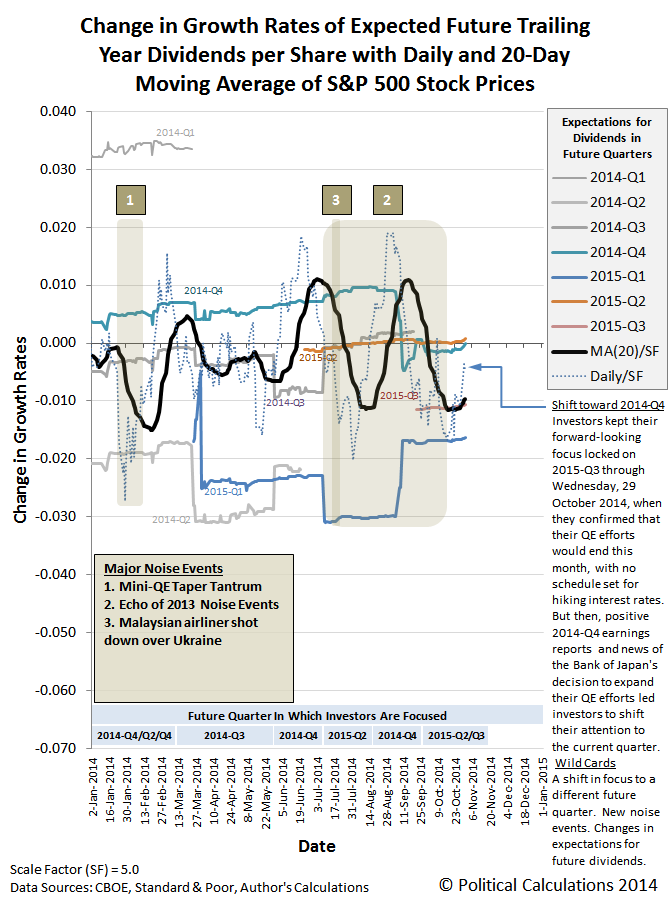 Meanwhile, there was no indication of investors having shifted any part of their focus to 2015-Q2, which is the only alternative change in focus that could have prompted a rally in stock prices, making a partial shift of focus to 2014-Q4 the mostly likely trigger for the rally.

And then, the reaction of world stock markets to the news that the Bank of Japan was committing to a major expansion of its QE programs accounts for the lion's share of the continued rally to record levels on Friday, 31 October 2014. Without a corresponding action by the Fed, the BOJ's action did not have the same impact on U.S. stock markets as it did for Japan's stock market. As such, we would expect that portion of the rally in the U.S. stock markets will prove to be a short-lived noise event.

But it gets a little worse. With earnings season for the fourth quarter of 2014 set to be almost completely over in the next two weeks, there will soon be little-to-no reason for investors to maintain any part of their forward-looking focus on 2014-Q4 in setting their expectations for making current day investment decisions. And that means that stock prices will be set to fall, unless the Fed acts to shift the focus of investors to 2015-Q2, which is something that they would only do if they believed the U.S. economy is growing more strongly than the data we have currently suggests.

Remember, there are real world reasons why investors shifted their primary focus from 2015-Q2 to 2015-Q3 several weeks ago - none of the apparently more positive economic data that has come out since would as yet prompt such a shift in focus back to 2015-Q2, but if it did, these first weeks of November 2014 would be the ideal time for such positive news to produce that result.

But we'll likely have a better read on how the U.S. economy is really faring in the current quarter as early as tomorrow to tell just how likely that might be....