On Wednesday, 29 October 2014, the U.S. Federal Reserve released a statement that was considerably modified from its previous statements, as the Fed's Open Market Committee confirmed that the U.S. central bank would terminate its Quantitative Easing (QE) programs at the end of October 2014.

The announcement marked the end of the Fed's purchases of Mortgage-Backed Securities (QE 3.0), which had originally been initiated in September 2012 as the U.S. economy was threatening to enter into a mild recession at that time, and also its purchases of U.S. Treasuries (QE 4.0), which the Fed had initiated in December 2012 to prevent the U.S. economy from falling into a deep recession as a result of the large income, investment and payroll tax hikes guaranteed by the recently re-elected President Barack Obama, which were set to go into effect in January 2013.

Our chart below reveals what trajectory that the U.S.' Gross Domestic Product would otherwise have taken in nominal terms if not for the Fed's QE programs, updated through the first estimate of GDP for the just completed third quarter of 2014, and also the limited amount of organic economic growth that has only recently appeared to be sustainable: 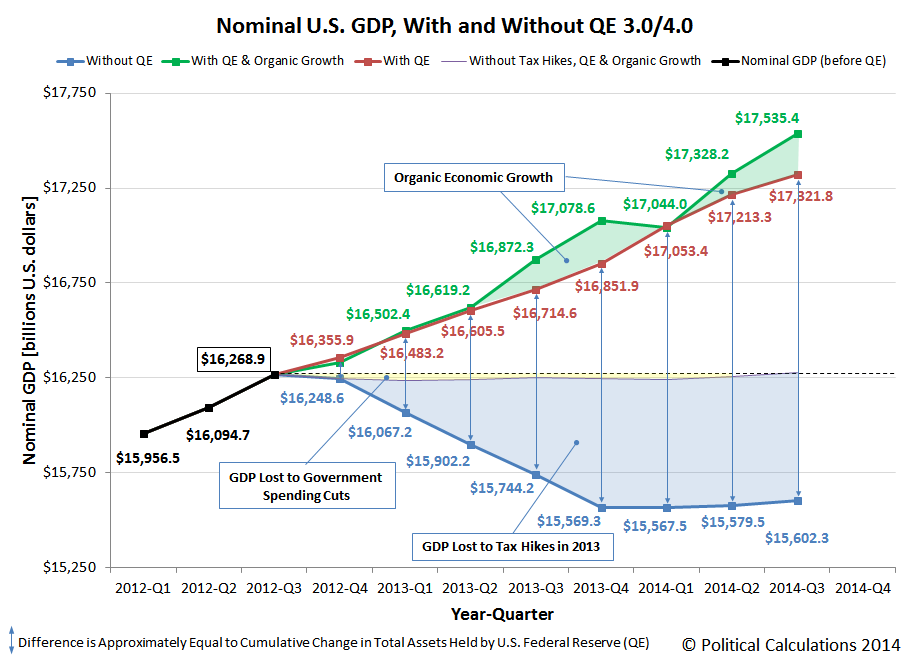 In this updated chart, we see that the GDP losses that might be attributed to government spending cuts imposed as part of President Obama's budget sequester policy in the third quarter of 2012 has largely been erased in just one quarter, thanks largely to an apparent surge in the federal government's spending for defense in the final quarter of its 2014 fiscal year.

That one quarter change in government spending increases the share of the fiscal drag created by the federal government's tax hikes from 90% to 100%. That fiscal drag now represents a permanent loss of GDP for the U.S. economy.

Meanwhile, the apparent sustained return of organic growth to the U.S. economy is really what is allowing the U.S. Federal Reserve to terminate its QE programs.

On the whole, the Fed's QE 3.0/4.0 programs would appear to have been successful in their purpose of keeping the U.S. economy out of the deep economic contraction that would most certainly have occurred in their absence - completely filling in the fiscal drag from the U.S. government's tax hikes while also providing a sufficient margin for generating slow economic growth.

We'll update our counterfactual chart one last time, sometime after March 2015, when we'll get the final reading for GDP in the fourth quarter of 2014.