How much would the U.S. federal government need spend per household to even come close to balancing the annual U.S. federal budget?

The latest update to our Zero Deficit Line chart reveals the answer! 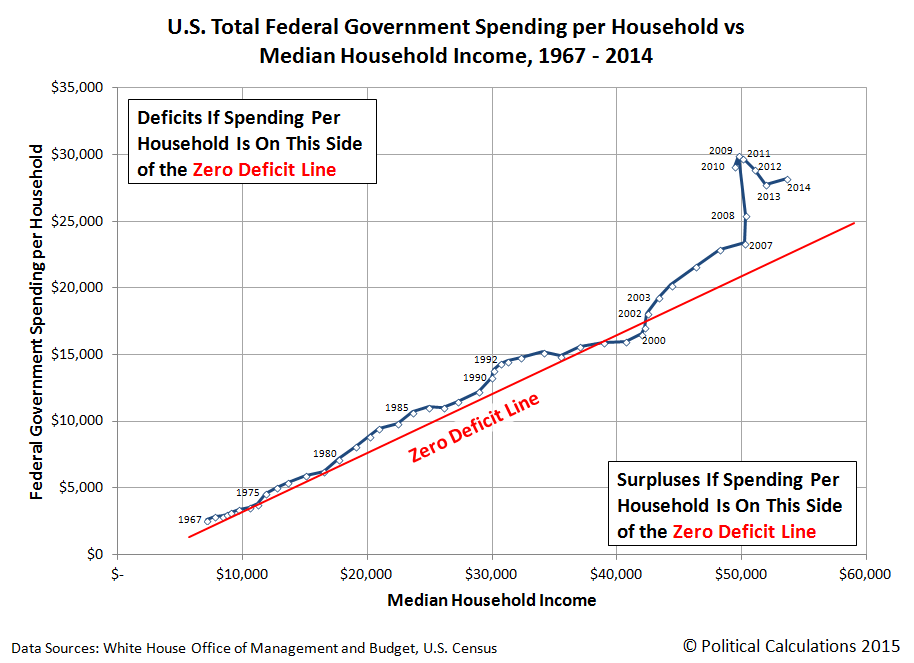 One way to think of that 52.6% figure is that it is the effective tax rate that would need to be levied on the income of the middle class in the U.S. to support President Obama's spending in 2014!

We also observe in the chart that 2014 was a year in which the U.S. federal government stopped making significant progress in eliminating the gap between the trajectory for federal spending and the Zero Deficit Line.

Which explains why the national debt per U.S. household reached an all time high, in both nominal and real (inflation-adjusted) terms. 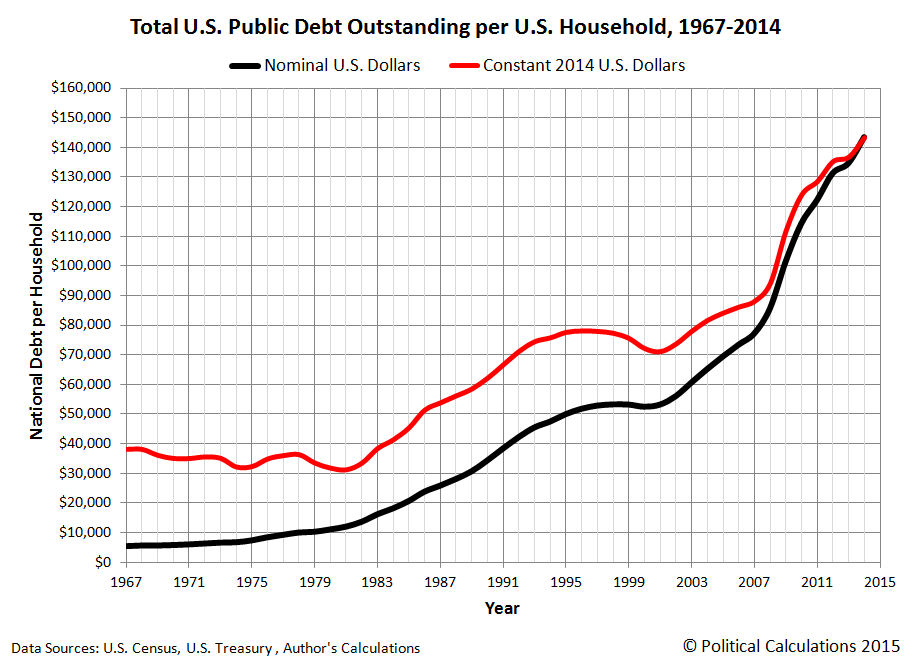 In December 2010, we introduced the Zero Deficit Line - a quick and easy way to visually see how out of whack government spending is with respect to how much spending that the typical American household can afford on its income.

How Much Federal Spending Can Americans Afford?

We built a tool to answer the question of just how much federal spending per household a typical American household can really afford! (We estimate that the income to enter in the tool going into 2015 is $53,601!)

U.S. Census Bureau. Current Population Survey. Annual Social and Economic Supplement. Historical Income Tables. Table H-5. Race and Hispanic Origin of Householder -- Households by Median and Mean Income. [Excel Spreadsheet]. Issued 17 September 2014. Accessed 2 February 2015. [Note: We estimated the total number of households for 2014 by adding the average annual change in the number of U.S. households from 2000 through 2013 to the figure reported for 2013.

Sentier Research. Household Income Trends: December 2014. [PDF Document]. Issued 26 January 2015. Accessed 2 February 2015. [Note: After converting all inflation-adjusted estimates of median household income to be in terms of current (nominal) U.S. dollars, we estimated the value of $53,601 for 2014 by calculating the average of the figures for each month in 2014.]

U.S. Treasury Department. The Debt to the Penny and Who Holds It. [Online Database]. Accessed 2 February 2015.