Political Calculations
Unexpectedly Intriguing!
March 30, 2015
A Direct Cause of the Declining Quality of Life for Americans

Today, we're going to follow up an observation we made when we examined the major trends for how the consumer spending patterns of Americans has changed from 1984 through the present, where we observed that since 2009, increases in expenditures for health insurance are being paid for by the reduced consumption of entertainment.

Let's start first by focusing just on the trends in consumer spending for the larger categories of Health Care and Entertainment. The chart below shows that from 1984 through 2009, the share of average annual total expenditures for both these items were less than one percent of total spending different from one another. But after 2009, that difference grew beyond that margin as something clearly changed to cause spending on the Health Care category to increase at the expense of the Entertainment category. 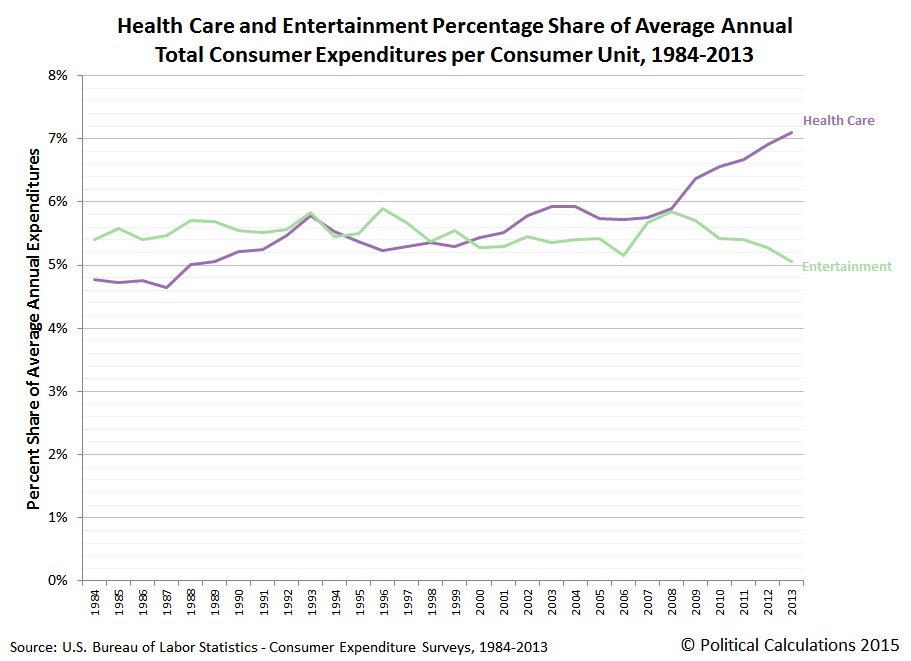 The Consumer Expenditure Survey provides some details on the components of spending that make up both the general Health Care and Entertainment categories. Focusing on the period since 2008, we've identified and broken those items out in the following chart, in which we've calculated the actual change in the dollar values of each of these components since 2008: 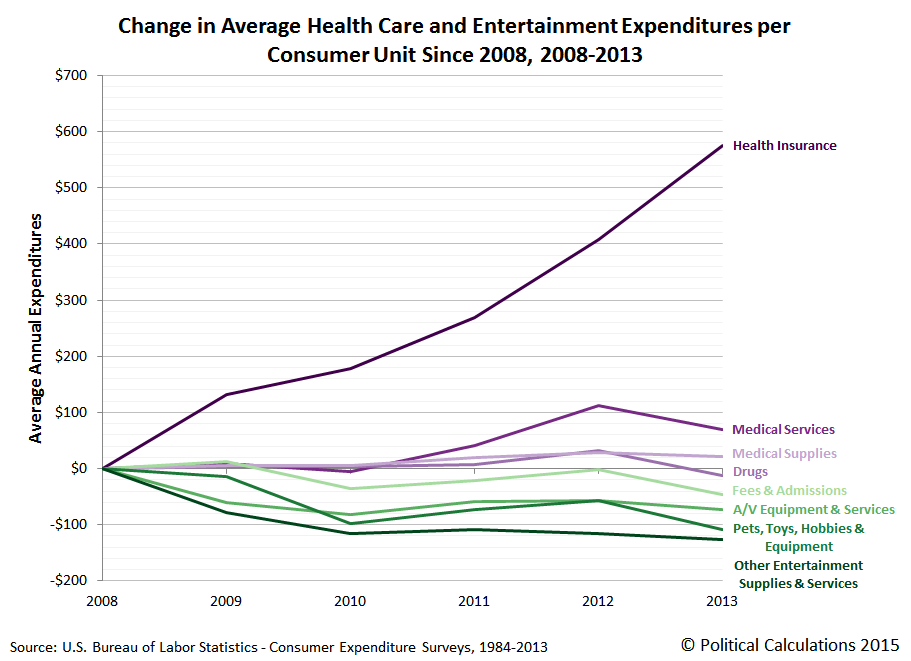 We also see that spending has increased by much lesser amounts in two other components of the general Health Care category, Medical Services and Medical Supplies. Both however are within $100 of what the average expenditures were for each in 2008. Meanwhile, we observe that spending for drugs, such as prescription medication, has been essentially flat since 2008.

By contrast, we see that average consumer expenditures for all components of the general Entertainment category have declined by anywhere from $40 to $120 per category, indicating a broad-based decline for Entertainment-related goods and services as a whole.

In our next chart, we focus just on Health Insurance expenditures and the combined Entertainment expenditures to find out the extent to which consumers have offset the exponential growth of health insurance costs beginning in 2009 with reductions in their expenditures for Entertainment. 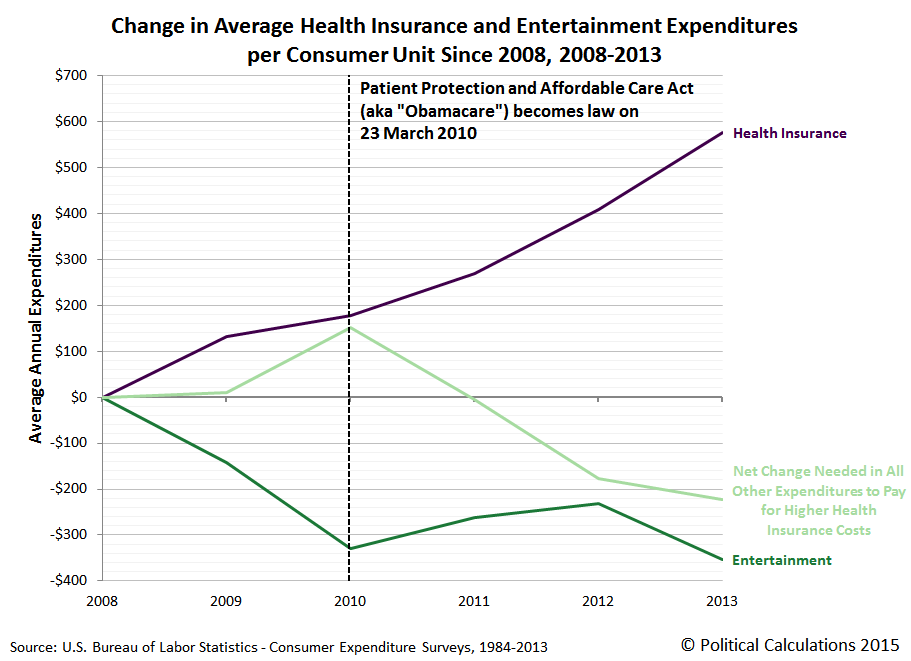 In this chart, we find that through 2013, the total reduction in average Entertainment expenditures per consumer unit has offset $353 of the $576 increase in Health Insurance expenditures since 2008, or 61% of the increase. American consumers have offset the remaining 39% of the exponentially increasing cost of health insurance from 2009 onward through reductions in other categories of consumer expenditures, most likely those that have already established declining trends over the long term, such as those for Apparel and other Miscellaneous goods and services. We also identify the cause of the increase in average health insurance costs per American consumer unit: the Patient Protection and Affordable Care Act, which became law early in 2010.

Since we have already demonstrated that the real level of average annual total consumer expenditures has not significantly changed in the last 30 years, what this result means is that the documented increase in health insurance costs from 2009 onward as a consequence of the Affordable Care Act is in large part being paid for by Americans cutting back on their expenditures for these other categories of consumer goods and services.

This direct evidence strongly indicates that Obamacare, as the Affordable Care Act (ACA) is more popularly known, has directly led to a decline in the quality of life of American consumers since its passage, as American consumers are now much less able on average to consume other goods and services to the same extent they were prior to the passage of the law.

Update 10 April 2015: We've followed up this post with more direct evidence of how Obamacare decreased the quality of life for Americans.