For the fourth month in a row, the number of publicly-traded U.S. companies announcing that they are reducing cash dividend payments to their shareholders has remained elevated at levels that are consistent with periods of economic contraction and recession in the U.S. economy.

In March 2015, the number of firms acting to cut their dividends climbed back up to 56, over five and a half times the maximum number that we've observed is consistent with a healthy, growing economy, and more than double the level where we've previously observed that some degree of economic contraction has occurred, outside of periods when changes in U.S. tax policies drove changes in the dividend policies of U.S. firms. 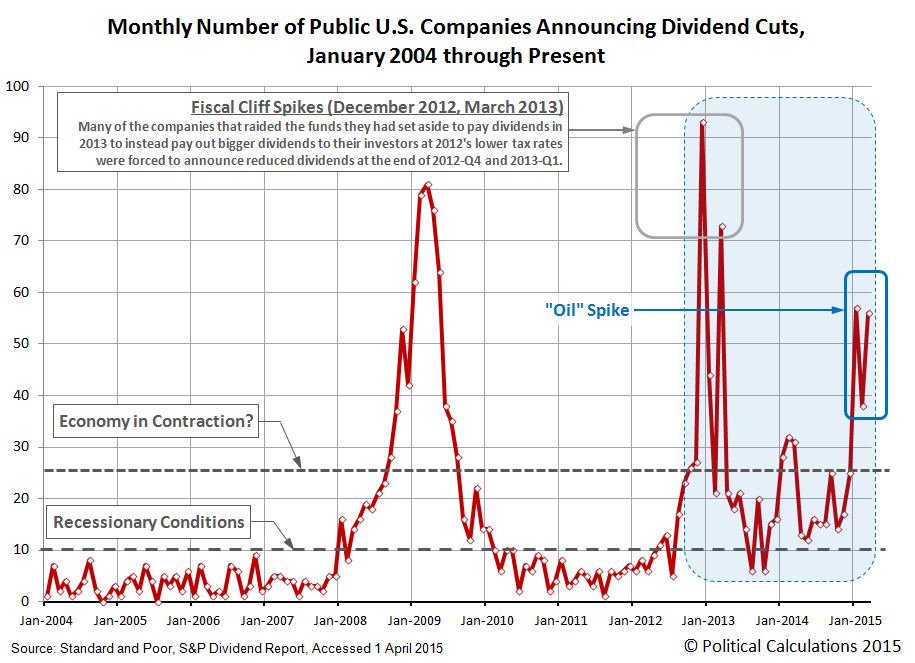 We've been tracking Seeking Alpha's Market Currents reports (filtered for Dividends) and the Wall Street Journal's daily listing of Dividends Declarations to try to keep up with dividend cuts as they have been announced throughout the month. These sources have some holes in their coverage, in that we've only identified 33 of the 56 companies that acted to cut their dividends during March 2015 according to Standard & Poor's Dividend Action Report. The table below presents the full list that we were able to assemble from these sources to get some idea of the breadth of distress in the U.S. economy:

In addition to the elevated number of oil and mineral extraction-related firms that we saw in February 2015, we also find an increase in the number of investment-related firms and trusts, particularly Real Estate Investment Trusts, along with a small handful of manufacturing-related firms. What that tells us is that in March 2015, it was more than just distressed firms in the oil and extraction-related industries that were facing problems.

We'll close by taking brief look at the basic trajectories that stock prices are likely to follow through much of the rest of 2015. 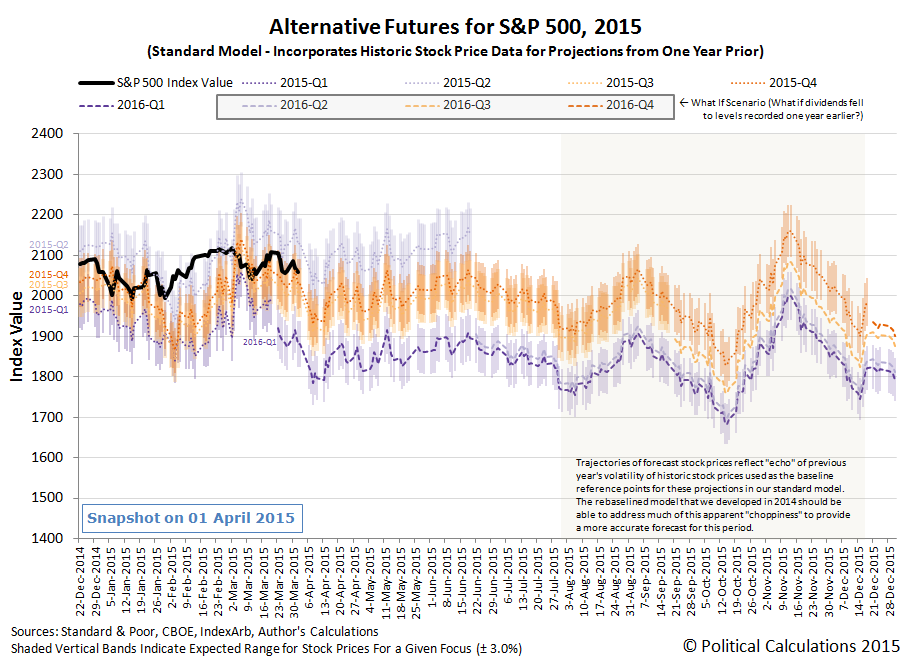 Each of these alternate trajectories are projected from historical stock prices, with the differences between them coinciding with the expectations that investors have for changes in the growth rate of dividends per share for the indicated future quarters. The actual trajectory that stock prices will follow is dependent upon the future quarter that investors focus their forward-looking focus upon in making the current day investment decisions.

At present, assuming no significant changes in the amount of dividends expected to be earned in the future, investors would appear to have split their focus almost equally between 2015-Q2 and 2015-Q3 in setting stock prices since the Federal Reserve's March meeting, where the Fed hedged the timing of when it is expected to begin hiking short term interest rates. The Fed is now expected to begin hiking rates anytime from June 2015 (the end of 2015-Q2) to September 2015 (the end of 2015-Q3).

Regardless, based purely on the fundamentals as they are expected today, it would appear that stock prices are likely to drift sideways to lower throughout much of the year.