Political Calculations
Unexpectedly Intriguing!
August 20, 2015
Does Your Story Stand Up to Scrutiny? 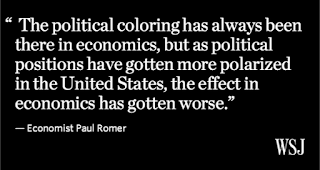 Economist Paul Romer recently made waves in his profession after he recognized the increasing use of misleading math by others in his profession, most often in the attempt to pursue a political or ideological agenda, has gotten to the point where it is obstructing progress in the field.

In doing so, he introduced the concept of "mathiness", which the Wall Street Journal summarized as follows:

In his paper, “Mathiness in the Theory of Economic Growth,” he described how “mathiness uses a mixture of words and symbols, but instead of making tight links, it leaves ample room for slippage.” If this sloppiness or even intellectual dishonesty continues, he warns, mathematical models will lose their explanatory and descriptive power. Instead, he writes, “Presenting a model is like doing a card trick. Everybody knows there will be some sleight of hand.”

How can we cut through the sleight of hand? Marianne Freiberger recently explored why proofs matter so much to mathematicians, but the arguments directly apply to economic analysis, and point to how increased challenges to politically-motivated flawed reasoning to get to the real truth:

In everyday life, when we're not just being completely irrational, we generally use two forms of reasoning. One of them, called inductive reasoning, involves drawing a general conclusion from what we see around us. For example, if all the sheep you have ever seen were white, you might conclude that all sheep are white. This form of reasoning is very useful — scientists form their theories based on the observations they make in a similar way — but it's not water tight. Since you can't be sure that you have seen every single sheep in the Universe, you can never be sure that there isn't a black one hiding somewhere, so you can't be sure your conclusion is really true. If you use inductive reasoning, you have to be open to revising your conclusion when new evidence comes to light, and that's what scientists generally do.

The other form of reasoning, called deductive reasoning, goes the other way around. You start from a general statement you know for sure is true and draw conclusions about a specific case. For example, if you know for a fact that all sheep like to eat grass, and you also know that the creature standing in front of you is a sheep, then you know with certainty that it likes grass. This form of reasoning is water tight. It can only go wrong if your premise is false, that is if you're wrong about all sheep liking grass, or if your observation is wrong, that is, the creature you're looking at is not actually a sheep. But if those two things are correct, then your conclusion follows necessarily from your premise: it is true everywhere and for eternity....

Mathematics is perhaps the only field in which absolute certainty is possible, which is why mathematicians hold proofs so dearly. Also, if we don't insist on proofs, mistakes can creep in that aren't easily spotted otherwise.

How might that be done in economics? We would suggest that the three imperatives, or rather, "economics in 10 words", that Peter Gordon uses to introduce economics to new students might provide an effective starting point for challenging those economists whose misuse of math and use of misleading data discredit both themselves and their profession:

Many econ professors know that some students only pay attention for the first few minutes of any course. So, some immediately tell them that it all boils down to three imperatives (ten little words). 1) at what cost? 2) compared to what? and 3) how do you know?

We think that it will be the "compared to what" and "how do you know" parts of those three imperatives that will most often trip up the deliberately deceptive economist. And to that end, we can apply our checklist for how to detect junk science for going about challenging the flawed work of such politically or ideologically-driven hacks.

The bad news is that we suspect that the people most likely to be engaged in that kind of misconduct will also tend to be highly unpleasant people, who may in fact be "completely irrational", to borrow Marianne Freiberger's phrasing.

On the other hand, it might be instructive to see how far such people are willing to go to deny reality to preserve their agenda.