You would think that an October that proved to be the fourth best October in U.S. stock market history in terms of the percentage gain recorded by the S&P 500, not to mention the best month for the market in the last four years, would be a month where U.S. firms are not announcing an unexpectedly increased level of dividend cuts.

You would be wrong. Going by our two sources for real-time dividend cut announcements, Seeking Alpha's Market Currents (filtered for dividends) and the WSJ's Dividend Declarations database, the first month of the fourth quarter of 2015 was keeping pace with the first months of the year's first and third quarters, all the way up until its last day of trading. And then, it unexpectedly spiked upward. 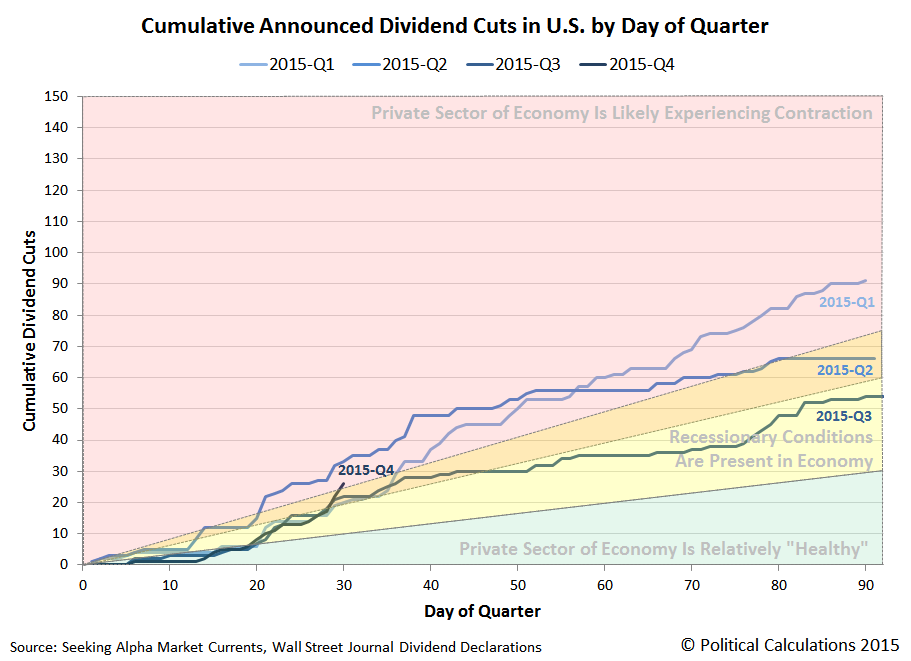 On 30 October 2015, we see that the number of U.S. firms who have announced dividend cuts jumped up into the range that is consistent with an elevated level of economic distress within the U.S. economy where there is some degree of contraction occurring.

Going by which companies have announced dividend cuts, that distress is largely concentrated within the oil and mining industries, along with a number of financial firms that have large stakes in these industries, which is largely explained by falling revenues (and profits) resulting from falling global oil prices. Even firms in these industries that have not yet announced dividend cuts are indicating that they are under increasing distress, as they are taking actions to significantly reduce their costs, including layoffs and massive cuts to their previously planned capital expenditures.

Unlike the previous month however, we haven't registered reports of dividend cuts for interest-rate sensitive firms, such as mortgage Real Estate Investment Trusts (REITs), which had increased in the latter portion of the third quarter of 2015 as interest rates were rising ahead of the Federal Reserve's planned increase in short term interest rates.

When that plan didn't happen as expected in September 2015, interest rates fell, which removed a good part of the stress on interest-rate sensitive firms. However, since the Federal Reserve has put a rate hike by the end of the year back on the table, we think that it is likely that we'll once again see these kinds of firms among dividend cutters by the end of the quarter.

The thing we want to see next is S&P's Monthly Dividend Report, which at this posting, should be updated for October 2015 sometime later today. The report is our benchmark for evaluating the near-real time health of the U.S. economy. For readers who want to get a jump on what we'll be discussing tomorrow, we've provided a link to the report with the data sources presented at the bottom of this post. [In case you're reading this article on a site that republishes our RSS news feed, which may or may not include our data references, click here to access it on our site.]