As promised, today we're doing something more interesting with the Federal Reserve's data for the level of private debt that has accumulated over time in the United States than just calculating its amount, it year over year rate of growth (or velocity) and also the rate of change in its year over year growth rate (or acceleration).

Starting with our results for the acceleration for private debt, we first calculated its trailing twelve month average to smooth out the volatility in our results to better capture its general trends during the period from January 1955 through June 2015.

We next extracted the U.S. Bureau of Economic Analysis' data on the quarterly growth rate of real (inflation-adjusted) Gross Domestic Product (GDP) spanning the same period, using linear interpolation to estimate the real growth rate in the months in between the months ending each calendar quarter, and then calculating the trailing twelve month average of the real GDP growth rate to smooth out the volatility in the results and to better capture the general trends in real GDP growth rates over time.

We then graphed both the acceleration of private debt (dotted blue line) and its trailing twelve month average (solid blue line) in the chart below, in which we've also indicated the periods for when the real growth rate of U.S. GDP was falling (shown as the light red vertical bands). For added measure, we've also indicated the periods in which the National Bureau of Economic Research has determined the U.S. economy was in recession (darker red vertical bands). 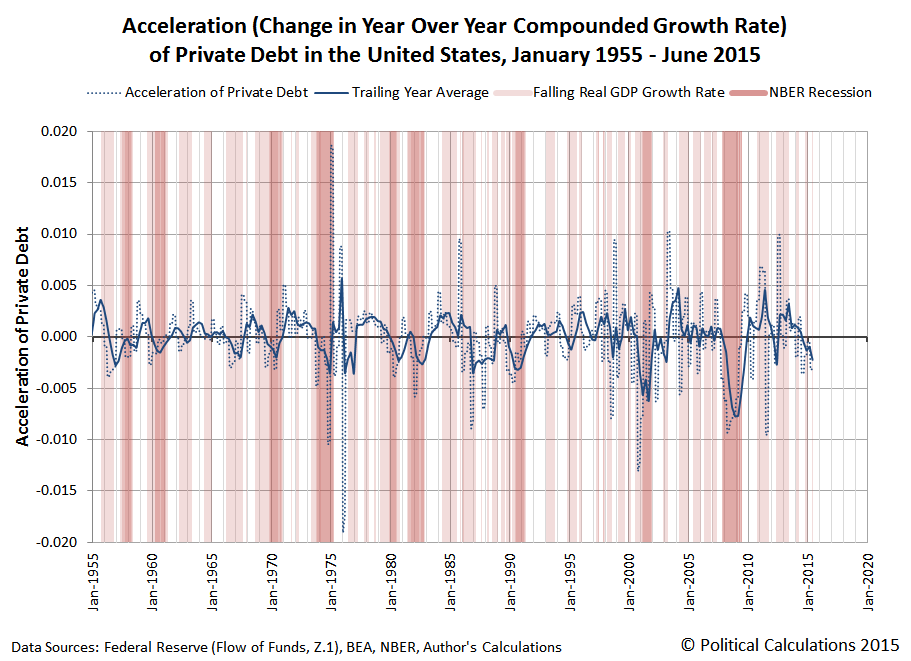 What we observe in the chart above is a really remarkable correlation. When the general rate of acceleration of private debt in the U.S. is falling, very much more often than not, such periods either precede or coincide with the periods in which the real rate of growth of the U.S. economy was also falling.

That works out to be very close to the results that Michael Biggs, Thomas Mayer and Andreas Pick found in their 2010 paper, in which they worked out the correlation between changes in the acceleration of debt and the level of employment in the U.S, which Steve Keen summarized that year (emphasis ours):

They first showed the cor­re­la­tion between what they called “the credit impulse”—the rate of change of the rate of change of debt, divided by GDP—and both GDP and employ­ment (for those who have access to research from Deutsche Secu­ri­ties, they have a sim­pler expla­na­tion of their analy­sis in Global Macro Issues for Decem­ber 17 2009: “The myth of the credit-less recovery”).

The chart below shows my con­fir­ma­tion of the rela­tion­ship with the data on the annual change in unem­ploy­ment in the USA and the annual rate of accel­er­a­tion of pri­vate debt since 1955. The cor­re­la­tion is –0.67: a stag­ger­ing cor­re­la­tion of a first and a sec­ond order vari­able over such a period, and across both booms and busts.

It occurred to us that the simple correlation between a declining rate of acceleration for private debt and a falling rate of real GDP growth isn't necessarily capturing the full dynamic between the two. So we went the extra mile and calculated the correlation for when the trailing twelve month average of private debt acceleration was either falling or negative and the periods in which the real growth rate of U.S. GDP was falling.

Speaking of which, in looking at the period since June 2013, we see that the acceleration of private debt in the U.S. has been falling and, through June 2015, the most recent month for which we have data, has become negative. We expect that the U.S. Federal Reserve will update its data for the U.S.' private debt through September 2015 sometime in mid-December 2015.

Update 14 December 2015: Added the words "growth rate" in boldface type to the second to last paragraph above for clarification.