More or Less is a BBC 4 radio program, hosted by Undercover Economist Tim Harford, dedicated to explaining and sometimes debunking the numbers and statistics used in political debate, the news and everyday life. It's a fascinating program and we often play the podcasts as we toil behind the scenes here at Political Calculations.

We bring that up because we've noticed a pattern developing in this past week, where we find ourselves treading on their territory, as we've explored a better measure of the economic well-being of the people of a nation, debunked a key assertion of a team of climate scientists and used U.S. soybean exports to explain why China's economy may not be performing as dismally as it appears.

Today, we're back in debunking mode, thanks to the release of a report by the Pew Research Center on Wednesday, 10 December 2015, which finds that the United States has reached a kind of tipping point, as middle class households in the U.S. are no longer in the majority. The Washington Post describes the report's key findings:

The nation has arrived at this tipping point in part because more Americans are moving up the income ladder. In 1971, just 14 percent of Americans were in the upper income tier, which Pew defined as more than double the nation’s median income. Now, 21 percent of American households are in that upper earning category -- at least $126,000 a year for a three-person household.

Overall, the share of Americans living in middle-class households has declined from 61 percent in 1971 to 50 percent. The hollowing out of the middle class has been a source of consternation among many economists, politicians and the public at large. They say as Americans move toward the economic extremes it is harder to find common ground, and a common sense of what it means to be an American.

Oh, really? Fortunately, the Washington Post goes on to explain just what it is that the Pew Research Center's analysts have seen in the data to support that conclusion:

The changing economic fortunes of American households has been most dramatic at the far ends of the income spectrum, Pew found. The share of households earning more than three times the median income--$188,000 a year for a family of three in 2014 dollars--is now 9 percent, up from just 4 percent in 1971. At the bottom, one in five households earned less than half the overall median income--$31,000 a year in 2014--up from 16 percent in 1971.

For that information, we turned to the Pew Research Center's report:

The biggest winners since 1971 are people 65 and older. This age group was the only one that had a smaller share in the lower-income tier in 2015 than in 1971. Not coincidentally, the poverty rate among people 65 and older fell from 24.6% in 1970 to 10% in 2014.13 Evidence shows that rising Social Security benefits have played a key role in improving the economic status of older adults.14 The youngest adults, ages 18 to 29, are among the notable losers with a significant rise in their share in the lower-income tiers.

Because of our previous work exploring the distribution of income within the United States, and particularly our work in exploring the distribution of income by age, we immediately recognized that what the Pew Research Center's analysts were seeing in the "hollowing out" of the U.S.' middle class wasn't the result of some nefarious cause, but rather the inevitable result of the changing age demographics of the U.S. population coupled with the nation's average lifetime earnings trajectory.

More specifically, the differences in the size of the living population of the U.S. by generation. The chart below shows the number of Americans born, whose births were registered, in each year from 1909 through 2004, while also indicating their generational grouping. 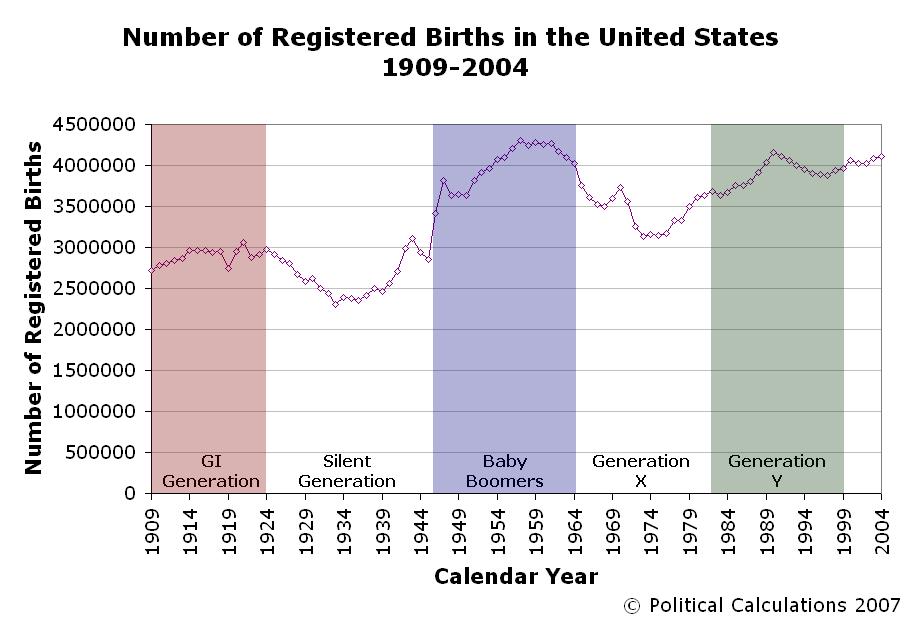 Now, let's show where those three generations fit among the distribution of income in the United States by age group. 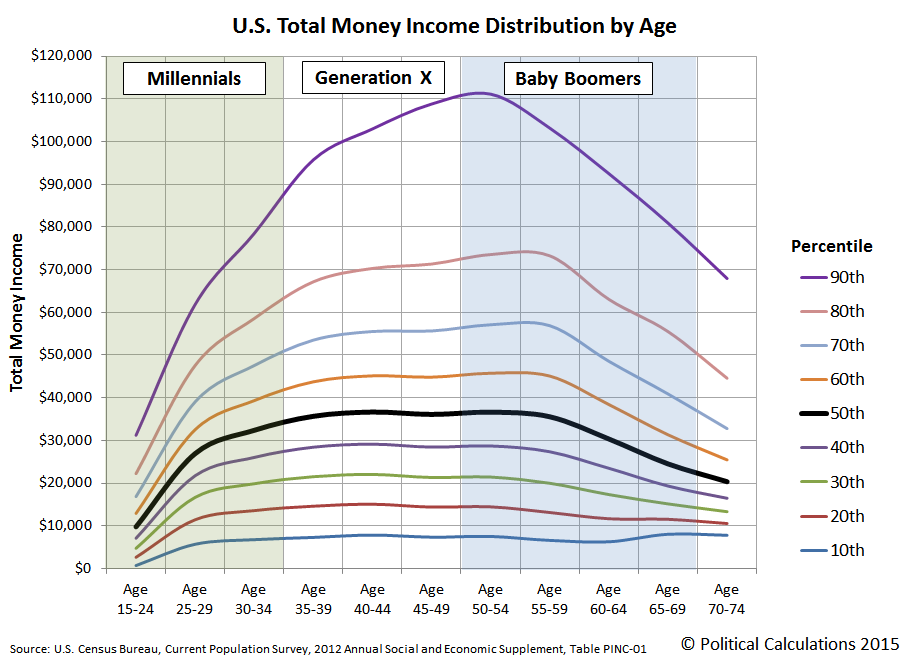 Meanwhile, we see that the much smaller Generation X finds itself sandwiched between these two larger generations in the ranks of the middle class.

Is it really any wonder then that the number of middle class households has shrunk as it has while the apparent income inequality among U.S. households has increased? The mystery of the disappearing U.S. middle class is solved - the apparent movement of Americans toward the "economic extremes" is primarily the result of the changing age demographics of the U.S. income earning population!

Now, if we could just get a better class of journalists to dial down their overly excited and poorly considered emotional hyperbole....

If you want to find out more, or want to get the data we used to construct the charts we presented in this post, you can find links to both from our previous discussion on the topic:

Update 15 December 2015: This post has been modified to add the text "coupled with the nation's average lifetime earnings trajectory" to the end of the twelfth paragraph. Also added a link to our "Generations" post in the same paragraph.