The market volatility that followed the Federal Reserve's December interest rate hike, its first in nearly a decade, is mostly over and the U.S. central bank can stay focused on economic data to inform its decisions on rates, a top Fed official said on Wednesday.

"We are probably at least as well off, or better off, than we were even at March; it does seem to be fading into the background," St. Louis Federal Reserve President James Bullard told Bloomberg Radio, when asked about market volatility earlier this year. "I think some of it was the reaction to the December rate hike, a kind of delayed reaction, and the notion that (the Fed) ... was not going to be flexible. But that idea has been dashed."

Would you like to see what he was talking about? At least, as visualized by our futures-based model of the S&P 500?

That model is based on a very simple premise: changes in the growth rate of stock prices are directly proportional to changes in the expected future rate of growth of their underlying dividends per share.

But here is where it gets complex and chaotic, because as we've long observed, investors focus on specific points of time in the future when they make their current day investing decisions. Stock prices then follow as investors adapt their decisions according to the expectations that apply at whichever point of time in the future they are collectively focusing their forward-looking attention.

Volatility in stock prices arises whenever investors shift their collective attention from one point of time in the future to another. The magnitude of that volatility then depends on the relative expectations for dividends at the future points of time to which they fix their attention.

Investors don't have to all be collectively focused on a single point of time in the future - often, we observe investors splitting their focus between two different points of time in the future, with the result being that stock prices will fall in between the levels that they might otherwise be if investors were fully focused on just one of the alternative future points of time they might focus upon.

That kind of volatility is distinct from the everyday kind of noise that arises from the interaction of millions of traders engaged in millions of transactions, which is best described as simple noise, which falls within a relatively narrow range about the level that is defined by how far forward in the future they are focusing. It is also distinct from speculative noise events, where factors other than expectations for future dividends may cause stock prices to deviate from the trajectory that their fundamental driver would have them follow. Such noise events inevitably come to an end - it is only ever a question of when.

Now, with that in mind, let's show the potential range of volatility that our model indicated that stock prices would fall within during the first quarter of 2016. 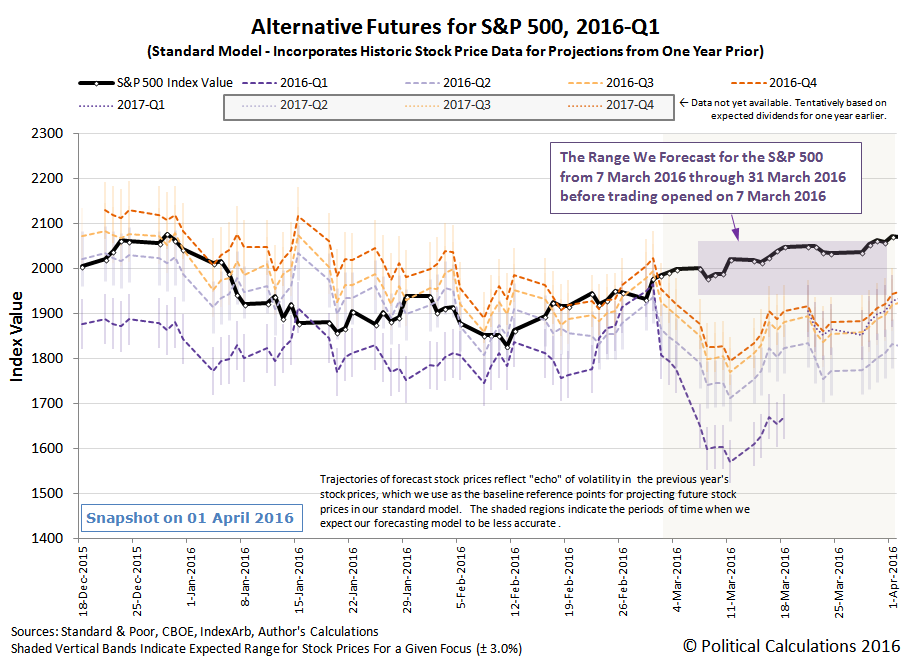 Outside of the period from 2 March 2016 through 7 April 2016 where the accuracy of our model was impacted by the echoes of past volatility in stock prices, due to our use of historic stock prices as the base reference points from which we project the future trajectory of future stock prices, we see that the potential range of volatility from the alternative futures associated with investors focusing on 2016-Q1 and 2016-Q4 is the greatest, with as much as 362 points of the S&P 500's projected index value between them, which includes the additional range that would arise from typical levels of noise in the market.

During that period, the actual trajectory maneuvered within a 249 point range, consuming 68.7% of that projected range of potential volatility. 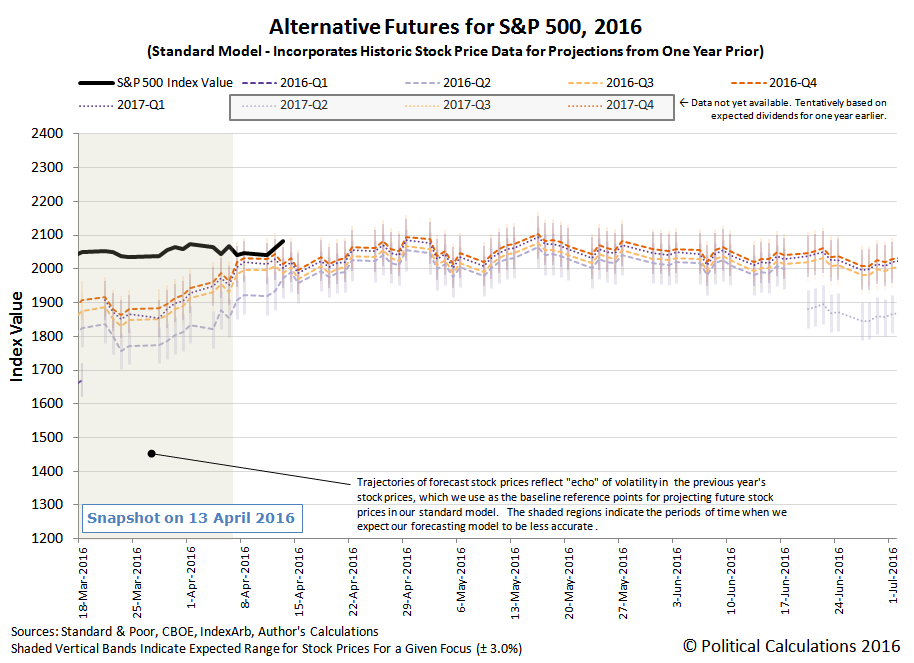 You now see what Jim Bullard has seen, although likely using different forecasts: a market where, in the absence of considerable changes to the expectations for future dividends or speculative noise between now and the end of the quarter, the forecast value of the S&P 500 might fit fully within a range of potential volatility of just 154 points - less than half the potential range of volatility that existed during the first quarter of 2016.

Now, if you're up on your modern financial theory, you'll see that our model of how stock prices work largely reconciles the major differences between Robert Shiller's "irrational" investors and Eugene Fama's "rational" ones in explaining the volatility of stock prices. Since both were awarded the Nobel prize for economics in 2013, despite having such theoretical conflicts in the work for which they were recognized, we're happy to have had the opportunity to build upon it to present a more coherent picture of how the world of stock prices really works.

Update 10:30 AM EDT: Remember what we said about changing expectations for future dividends? The potential range of volatility for 2016-Q2 widened this morning as the CBOE's implied dividend futures for 2016-Q2 (CBOE: DVJN) declined from $11.51 per share to $11.24 per share. The result of that change is illustrated in the following chart: 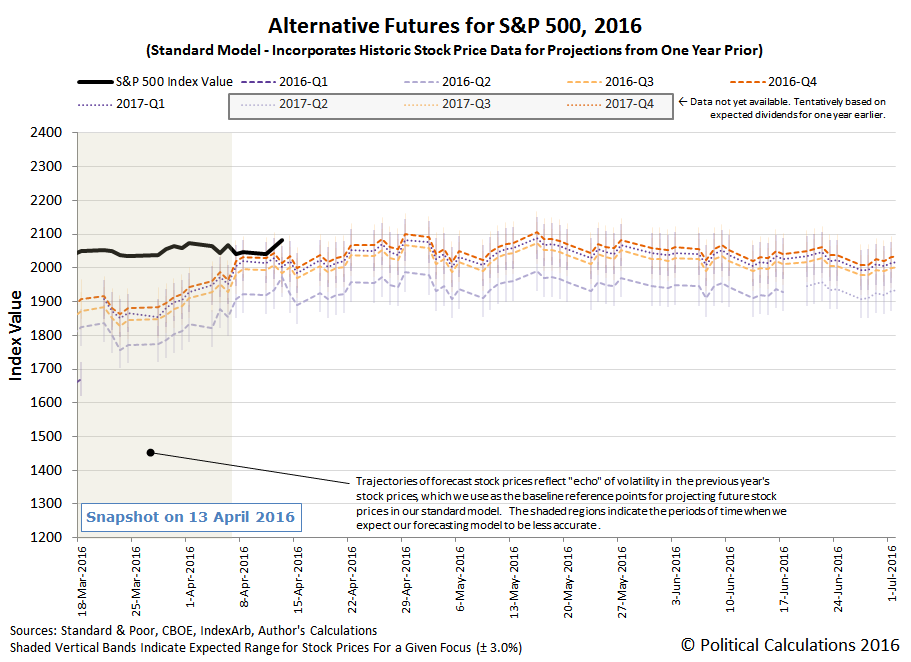 Looking forward, the potential range for volatility in the S&P 500 during 2016-Q2 has expanded to 228 points, which is about 63% of the range recorded in 2016-Q1. Still less volatile than the first quarter of 2016, but not as promising as it looked yesterday.