Previously, we declared that the tipping point for cigarette taxes in Hawaii was on the verge of being reached, where further increases in the state's tobacco taxes would no longer be met with rising tax revenue, but would instead be met with falling tax collections.

Here is how we predicted that scenario would play out, based on our observations of how Hawaiian consumers were adapting their behavior in response to the state's tax hikes on tobacco products, beginning with our description of what we meant when we said the state had reached a tipping point for its cigarette taxes:

By that, we mean that each percentage increase in the inflation-adjusted price of cigarettes above their 2009 level will result in a greater percentage decline in the quantity of cigarettes sold.

That result suggests then that both Hawaii and the federal government have little to gain in terms of their tax collections from Hawaiian smokers by increasing cigarette taxes at a rate faster than inflation. Which means that if these governments are counting on having higher taxes on tobacco products for funding their spending programs, they can instead count on being out of luck.

Instead, elected officials and bureaucrats in Hawaii can count upon ever-greater tax avoidance behavior on the part of cigarette smokers in the island state.

Drawing from Hawaii's monthly tax collection reports going back to 2000, our first chart shows the amount of taxes that Hawaii collected from its increasing excise taxes on tobacco products over the preceding 12 months for each month since January 2000 through the most recent report for February 2016. 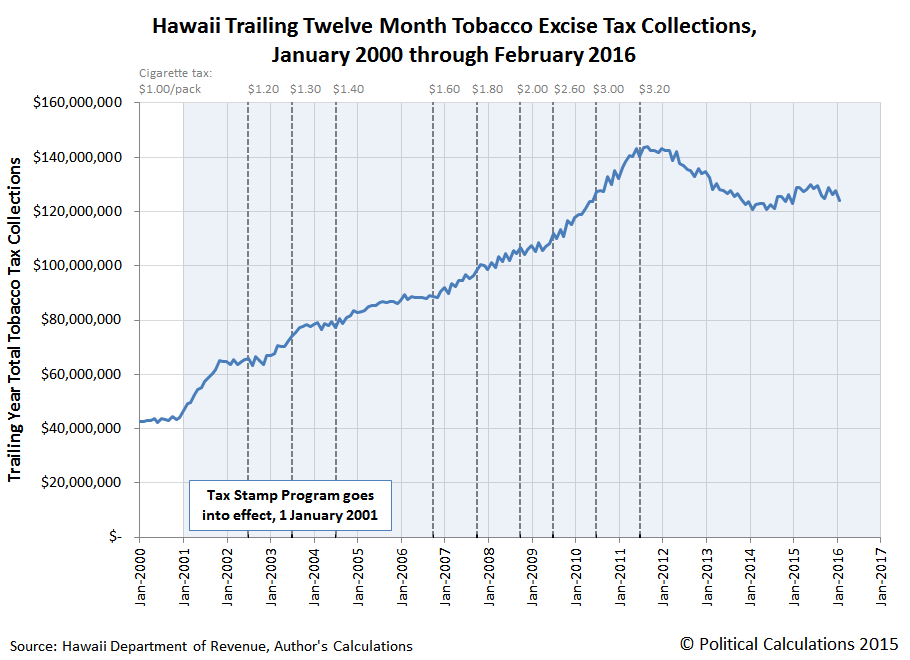 In the chart, we see that after Hawaii improved its tobacco tax collection enforcement practices, which were responsible for its increased tax collections that year, the state increased its tax collections each time it hiked its excise taxes on tobacco products all the way up until those taxes peaked at $3.20 per pack on 1 July 2011.

And then, tax collections not only stopped going up, they began to reverse as Hawaiians adapted to avoid the taxes.

That hurt, because Hawaii was counting on having millions more in revenue following its most recent cigarette tax hike in 2011.

In reality, Hawaii's trailing twelve month total of tobacco tax collections peaked in September 2011 at $144.1 million, after which it fell by $23.4 million to bottom at $120.6 million in February 2014, before rebounding somewhat to $129.9 million in June 2015. Since that time, Hawaii's tax collections have fallen slightly thanks to the state's 2015 law to raise the legal age for purchasing tobacco products to 21, which took effect in January 2016. So we find that instead of raking in the $152 million per year in tobacco excise taxes, the state of Hawaii is regularly coming up some $32 million short in revenue it was expecting to collect through its high tobacco taxes.

The next chart shows how the equivalent number of packs of cigarettes per taxes collected in the previous 12 months changed over the period from January 2000 through February 2016. 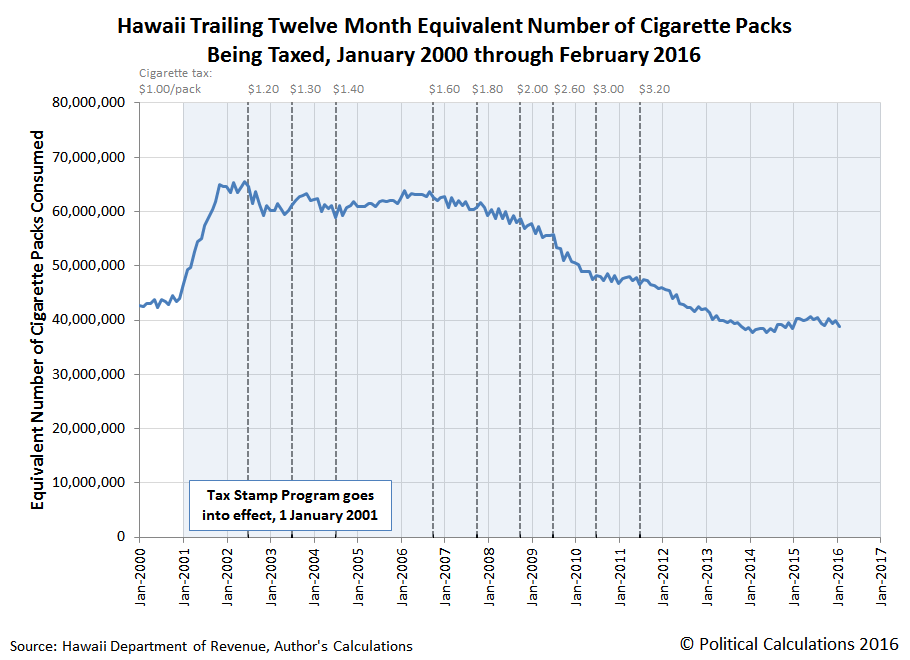 Here's what we find fascinating. In every other one of the United States, people seeking to avoid paying what they believe to be excessive tobacco taxes generally turn to bootlegging, where tobacco products purchased in a low tobacco tax jurisdiction are transported across state lines and sold at an extreme discount to tobacco product consumers compared to what they would pay if they lawfully purchased tobacco products at retailers in their own state.

That's not much of a viable option for Hawaii, given the state's remote location in the Pacific Ocean, where transporting goods to the state from anywhere else in the world, lawfully or not, is costly.

So Hawaiians, and particularly young Hawaiians, have adapted to the state's high tobacco taxes by changing their behavior to consume nicotine through vaping rather than through tobacco products. So much so that the growth of vaping in Hawaii has been described as "out of control" as new consumers of these nicotine-containing goods are clearly favoring vaping-related products over tobacco-related ones.

Since the state imposed its high excise taxes on tobacco in part to cope with the expensive health problems that result from the consumption of traditional tobacco products over a prolonged period of time, whose health hazards are largely caused by other ingredients that are not shared by vaping-related products, the state should benefit from the behavioral adaptation through dramatically lower public health expenses realized through a lowered risk of susceptibility to the kind of ailments that are strongly associated with long-term tobacco product consumption.

In fact, that's the kind of social benefit that is supposed to be provided through the kind of sin taxes first proposed by economist Arthur Pigou, which goes something like this: tax a bad thing, and you'll get less of the bad thing because you make it more costly.

But what happens when a state becomes dependent on the revenue it gets from taxing the bad thing and then it succeeds in getting less of the bad thing being taxed? In fiscally troubled Hawaii, state government officials would seem to believe that the stream of revenue they obtained under the pretense that it was necessary to cover some of the state's portion of the costs for treating the health ailments of poor tobacco consumers is instead absolutely vital for supporting their other priorities. Priorities that include funding their own pension benefits at the top of the list.


That is why the state's legislators are currently looking to impose similarly high taxes on vaping-related products, despite lacking evidence that they are similarly bad. They are simply desperate for the money.

The alternative option of restraining the growth of their promised spending on state government employee pensions so that it can be made permanently sustainable is apparently not being seriously considered by the state's officials. That greed then explains why Hawaii's state officials are seeking to snatch failure from the jaws of their success in motivating the state's consumers of tobacco products to consume far fewer harmful tobacco products.