Let's shake things up a bit and start this week's review of last week's action in the S&P 500 by considering the major market moving headlines of the week preceding the Memorial Day holiday weekend in the U.S.

So why does St. Louis Fed President Jim Bullard think that? Here's a hint from his reported remarks:

St. Louis Federal Reserve President James Bullard said on Monday global markets appear to be "well-prepared" for a summer interest rate hike from the Fed, although he did not specify a date for the policy move.

"My sense is that markets are well-prepared for a possible rate increase globally, and that this is not too surprising given our liftoff from December and the policy of the committee which has been to try to normalize rates slowly and gradually over time," Bullard told a news conference after speaking at an academic conference in Seoul.

"So my ideal is that if all goes well this will come off very smoothly."

Our alternative futures chart below, which is based on our dividend futures-based model of how stock prices work, reveals that the spread of potential volatility for the S&P 500 has narrowed to less than 75 points, regardless of whichever future quarter investors might focus their forward looking attention upon. 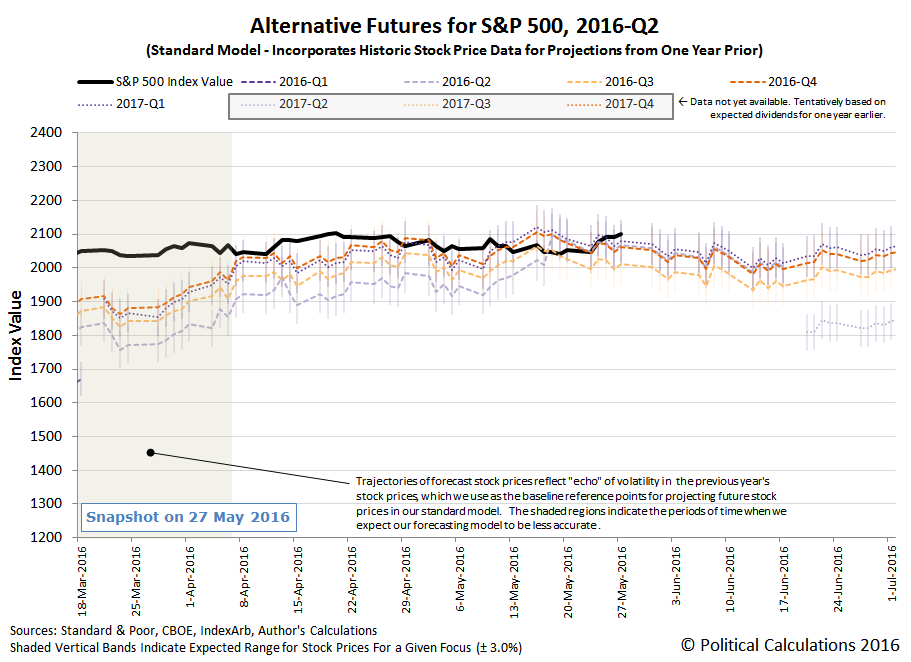 That means that no matter what the Fed might do, the value of the S&P 500 is unlikely to move more than 3-6% in value in the near term future, and the only reason we think it might move as much as 6% is because we believe that the S&P 500 is presently running slightly to the hot side. So where the stock market is concerned, the Fed now has optimal conditions for hiking short term interest rates.

Following up an observation we made in our review of Week 3 of May 2016, it appears that what we had thought might be a short-term pricing anomaly for the CBOE's implied forward dividends contract for S&P 500 in the second quarter of 2016 (CBOE: DVJN) represents a real change in the expected amount of dividends that will be paid out before the end of the quarter, as it has been sustained for more than a week.