Most people don't realize this, but the entire science of economics is really about cows.

Really! Just consider the following list of economic systems that have been proposed, which we've grafted together from a several different sources, and which nearly all begin with a single scenario, where you have two cows....

So what is it about cows that make them so useful for demonstrating different concepts like these different systems of allocating resources in economics?

The short answer is once you've grasped the concept of having two cows, you suddenly have a stake in understanding the concepts of supply and demand that drive real world events wherever resources are scarce and must be allocated by some means, and ideally, the most effective means that make the most people happy.

And as you're about to see, that can be a real challenge. Just consider the following news story from July 2012, where the effect of an especially severe period of drought in U.S. farm states created similarly severe shortages of feed grains for the nation's beef cattle, which created a very painful situation in those states where cattle ranching represents a big part of their agricultural economy.

But the impact of the drought that forced farmers to either sell off more of their cattle herds for slaughter than they really wanted to or else go bankrupt didn't end when the rains returned.

And in fact, the negative impact has endured for years. The accelerated slaughter of beef cattle in 2012 and 2013 caused the supply of cows to fall to reach a 63-year low in 2014, which in turn, caused their price to increase because the demand for beef did not fall enough with respect to the available supply to keep from rising. This is the reason why Americans have seen such high prices for beef in the supermarket during the last few years.

So when the rains returned, easing the shortage of feed grain and thereby allowing cattle farmers to regrow their herds, some people with highly deficient thinking might think that situation would be almost immediately remedied. Such people would be wrong, as other facts of nature would ensure a prolonged depression in beef production, which would begin with an even greater negative impact in the near term, as income would be deferred today as the price of investment for being able to realize more income through greater growth in the future.

The number of young, female cattle held back for breeding probably rose 3.1 percent to 5.53 million head, according to the Bloomberg survey. Beef supplies will keep falling because those heifers aren’t going to the feedlot, said John Nalivka, president of Sterling Marketing Inc., an agricultural economic research and advisory company in Vale, Oregon.

“It’s a real ironic situation that most people wouldn’t think about,” Nalivka said. “At the initiation of herd expansion, you actually reduce your production. That means we’re going to have tight beef supplies for the next two to three years.”

Expanding the U.S. herd is a slow process. Calves have nine-month gestation periods and take 20 months to 22 months to reach slaughter weight, according to Ron Plain of the University of Missouri in Columbia. Animals typically are fattened on corn until they weigh about 1,200 pounds (544 kilograms), when they are sold to meatpackers. The calf crop probably declined to 33.57 million head, down 2.1 percent from a year earlier, the Bloomberg survey showed.

As a result of those considerations, at a minimum, the shortage of beef cattle that was caused by a shortage of feed grain that itself was caused by an especially severe multi-year drought would not begin to recover for a nearly three year long period of time.

Coincidentally, that is exactly what we see now beginning to happen in the USDA's data for U.S. beef production. The following chart spans a little over 10 years of time, from January 2005 through April 2016, which allows us to consider the impact of a couple of major shocks to the economy. 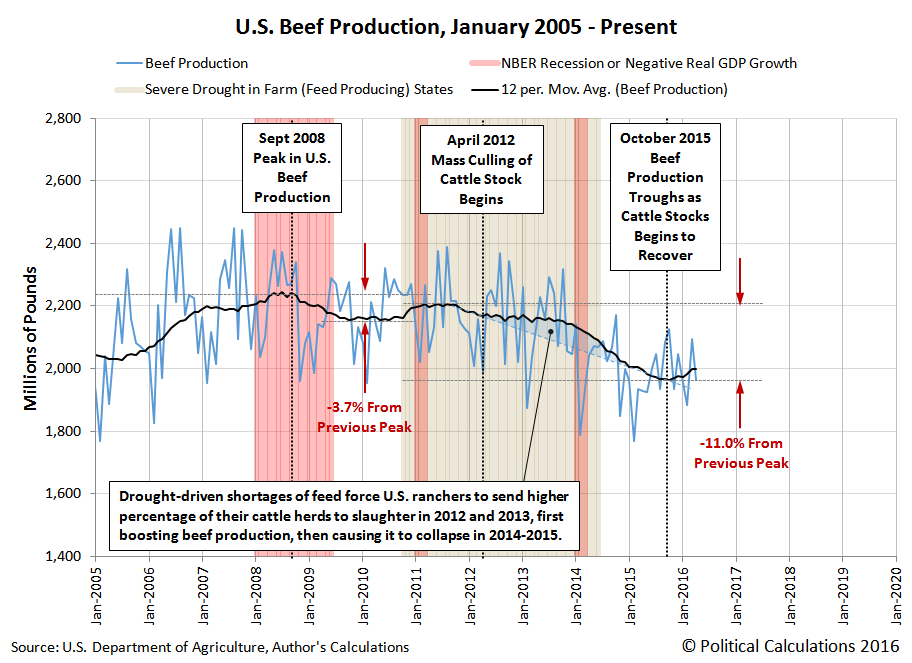 It has already lasted much longer. For now, it appears to have reached the point where it has started to turn the corner and begin growing again. It will however still be several years before a full recovery can be said to have achieved. Assuming no new climate change shocks or national recessions whack the market environment for cows again in the meantime.

Update 17 July 2016: The negative real economic shock of drought also appears when we drill down into the available data for individual states with a substantial beef cattle industry. Here, because the USDA doesn't break out beef production by state, we need to substitute the inventory of cattle on feedlot, which is the final stage of live cattle production where beef cattle are finished before being processed into beef products. The chart below applies for the state of Kansas, which was at the epicenter of severe-to-extreme drought in the U.S. during the period from 2010-Q4 through 2014-Q2. 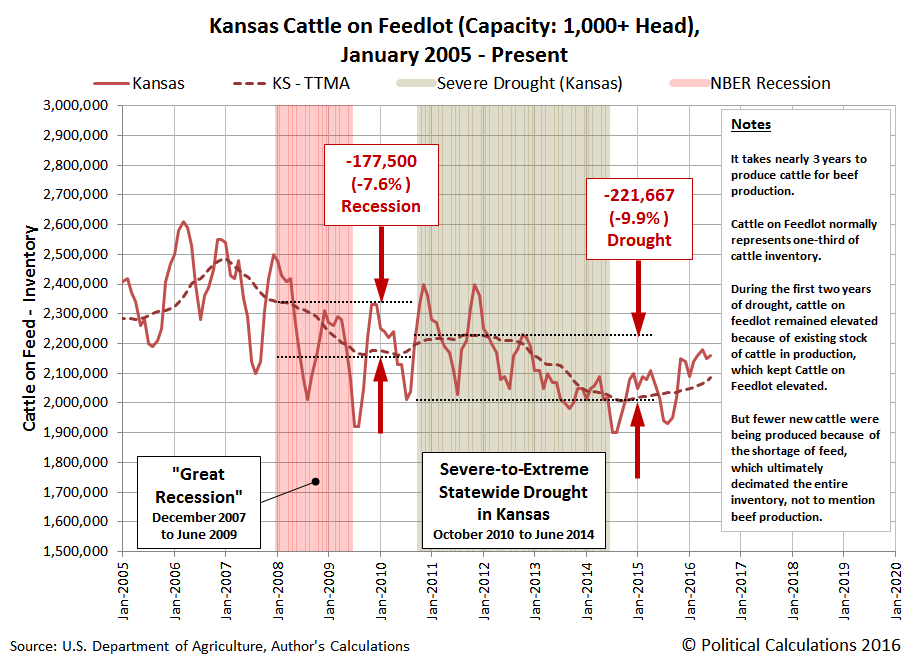 The data confirms that Kansas' inventory of cattle was decimated as a direct outcome of the prolonged period of drought that it experienced. For Kansas' agricultural industry, that impact is especially significant because the state's beef cattle industry is responsible for generating anywhere from one-half to two-thirds of the entire agriculture industry's total cash receipts in any given year.

It's rather amazing to see the desperate lengths to which some have gone in attempting to pin the full blame of Kansas' poor economic performance in recent years on the state's fiscal policies(!?!), rather than even consider that a substantial portion of that performance resulted from the contribution of other factors. Like an extreme, prolonged period of drought.... Believe it or not, there are those who have used methods indistinguishable from junk science to dismiss the large and prolonged negative impact that the especially severe drought of 2012-2013 has had upon the economy of the states whose economies were most affected by it, who claim that the very real climate change event of drought had no significant or sustained real effect upon their economies.

As you might imagine, such people are little more than modern day Lysenkoists - the kind of super creepy people so committed to a bizarre political agenda that they don't notice how disconnected they have become from reality, much less how they have fully beclowned themselves in becoming real life climate change deniers.

We're not sure yet how to fit such people into a two cow framework, but we do know how to have fun at the expense of their many mistakes. Which we will do at our leisurely convenience, unless they should miraculously demonstrate that they have the ethical integrity to own up to them first.