Political Calculations
Unexpectedly Intriguing!
August 31, 2016
Order, Such As It Is, Returns to the S&P 500

A little over a week ago, the Wall Street Journal suggested that the U.S. stock market was especially quiet, which is to say that U.S. stock prices aren't very volatile lately.

Another way to describe that situation is that order in stock prices may finally have returned after having last broken down on 20 August 2015.

So we put that proposition to the test, with the results visually presented below. As best as we can tell, some degree of order returned to the S&P 500 sometime in late March 2016, where we're starting the clock for a new period of order as of the last day of the first quarter of 2016, 31 March 2016. 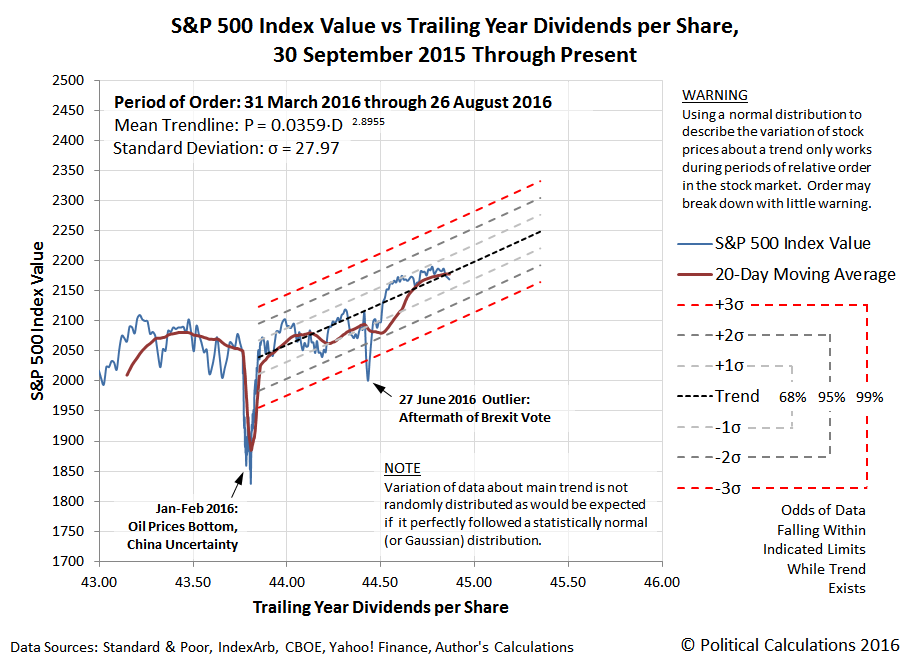 Since then, we've seen one outlier affecting the overall trend, which corresponds to the reaction of global stock markets to the outcome of the Brexit referendum, in which voters in the United Kingdom directed that nation's politicians to begin exiting from the European Union.

Other than that outlier, which the U.S. stock prices recovered from quickly, we can confirm that there has indeed been very little in the way of volatility in the U.S. stock market. Additional credit may also be given to the rise of oil prices since mid-February 2016, which has boosted the business prospects of the U.S. oil industry, and also the apparent stabilization of China's economy, which both had been major contributors to chaos in the U.S. stock market during much of the latter portion of 2015 and early 2016.