Beginning on the first day of January 2017, the City of Philadelphia began levying a new excise tax on the distributors of naturally or artificially sweetened beverages within the city's limits. By now, there is quite a lot of accumulating evidence that indicates that things aren't going the way the city's hapless leaders had hoped they would. We're going to see if we can put a dollar figure on just how bad things are going in the city where its soda tax is concerned.

Last week, the Philadelphia Inquirer provided numbers that tell us both what the city's politicians expected to gain from imposing the new tax and also how well their attempt at social engineering through the tax code is going, where we've excerpted some key numbers from the article.

Philadelphia soda tax: By the numbers

Nearly two months into the implementation of Philadelphia's tax on sweetened beverages, numbers are starting to come in about the levy's impact.


Here are some key figures to know about the 1.5-cent-per-ounce tax, which went into effect Jan. 1 and is levied on distributors.

$5.7 million: How much revenue the city brought in for January, the first month of the sugary drinks tax (that figure is preliminary and could rise)

$91 million: The amount of tax revenue the city wants to bring in annually from the levy

27 percent: The sales decline in sweetened drinks predicted by the city

30 to 50 percent: The drop in beverage sales some supermarkets and distributors have reported seeing so far

That information is enough to begin working out what's gone wrong with Philadelphia's soda tax. Starting with the city's rosy estimate that it would collect $91 million in annual revenue from the new tax, if we divide that figure by the 1.5-cent-per-ounce ($0.015/ounce) that Philadelphia is levying upon sweetened beverages distributed within the city, we can see that the city's leaders were counting on being able to tax an average of 6.067 billion ounces of such beverages per year, or 505.6 million ounces per month.

We know from the statements of a number of beverage distributors in the Philadelphia metropolitan area that the city's soda tax was too big, where it was inevitably going to be passed through to the city's beverage retailers, where it would ultimately affect the prices that regular customers would pay for the beverages. The following story from back in early January, just after the tax went into effect, describes how it affects a small, long-time family-owned distributor.

According to the city, more than 130 distributors have registered to pay the tax, including major corporations such as The Coca-Cola Company, Sunny Delight, and Sysco, as well as independent business owners like Andy Pincus.

Pincus owns and operates Carbonator Rental Services, the company his father started in 1955 in the midst of the malt shop era.

The air inside his warehouse in Southwest Philadelphia has a lightly sweet smell, which emanates from the small manufacturing facility where his employees mix large vats of private-label syrup. The rest of the warehouse is lined with row after row of cardboard boxes, many of them filled with 5-gallon bags of syrup waiting to be mixed with fizzy water and dispensed from soda fountains.

Just one 5-gallon box of syrup makes about 3,840 ounces of soda or 192 20-ounce cups. Depending on whether it's his own label or a national brand like Coca-Cola, Pincus charges anywhere from $60 to $90 per box.

But now, every time he sells one to a customer in Philadelphia, Pincus owes the city $57.60 in taxes.

Pincus explains it this way: For every 5-gallon box of syrup he sells, he says he makes between $3 and $18 in gross profit — that's the price he sells it for minus the cost he pays the manufacturer. Out of that, Pincus has to pay his delivery truck drivers, buy gas for the truck and cover other costs of doing business. That means he can't afford to absorb the tax himself.

The following screen shot shows the price of $3.00 per bottle that we found applies for 2-liters of Coke at ShopRite of Whitman Plaza, which falls within Philadelphia's city limits: 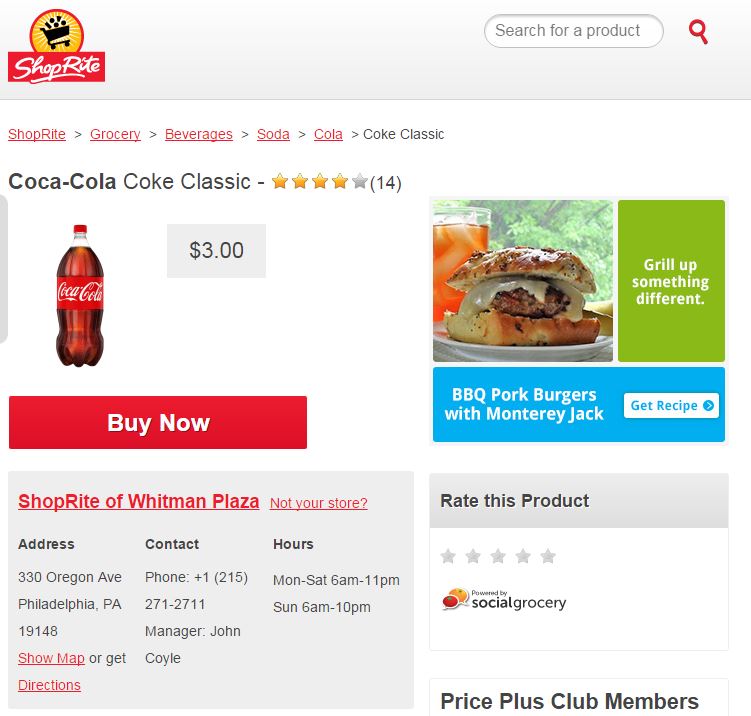 The next screen shot shows what we found a 2-liter container of Coca-Cola was costing at ShopRite of Warminster, Pennsylvania in the period from 25 February 2017 through 4 March 2017, which falls within the greater Philadelphia metropolitan area, but is outside of Philadelphia's city limits. 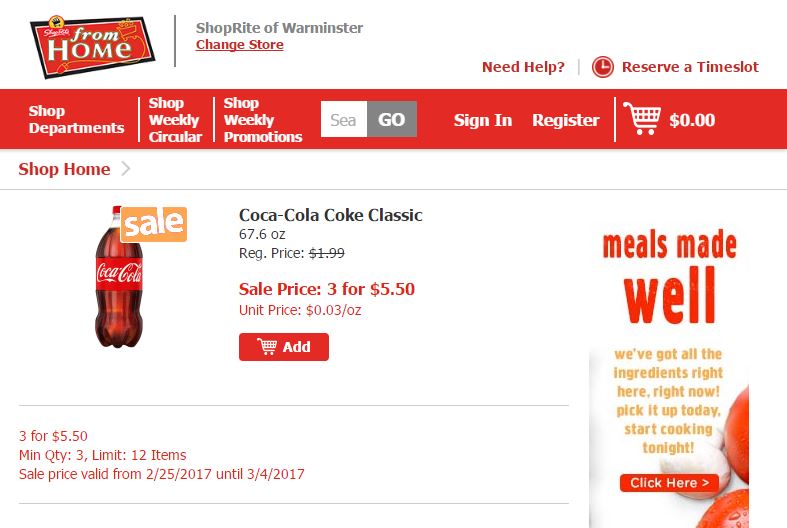 Here, the "regular price" of $1.99 per 2-liter is the proper one to compare with the Philadelphia ShopRite location. Its cost per ounce works out to be 2.94-cents-per-ounce.

The difference in cost per ounce between the 2-liter subject to Philadelphia's sweetened beverage tax and the 2-liter that is not subject to the soda tax is 1.49-cents per ounce. Since the tax is actually 1.5 cents per ounce, we can confirm that virtually all of the tax imposed on Philadelphia's beverage distributors is being passed through to the city's retail customers in this current-day example.

And that means that the attempted money grab by the city's politicians is doing some real economic damage, in that its new tax is causing significant deadweight losses to the city's economy. What's a deadweight loss, you ask? Let's turn to MRUniversity's Alex Tabarrok for an explanation!

We've built a tool to do the math to calculate the deadweight loss that Philadelphia's soda tax has unleased using the prices we've documented and the numbers we've uncovered in this analysis. If you're accessing this article on a site that republishes our RSS news feed, please click here to access a working version of the tool.

Based on the results with the numbers available at this writing on 1 March 2017, Philadelphia's soda tax may have shrunk the city's economy by up to $2.34 million per month. We anticipate that when the city's tax collection data is finalized, the deadweight loss will be less than what the initial numbers suggest, but it will still be significant enough where it will lead to job losses in Philadelphia.

You might be wondering how Philadelphia's mayor and city council screwed up the economics so badly. To understand why, let's turn to MRUniversity's Tyler Cowen, who explains the concept of tax incidence, or rather, who pays the taxes imposed in this case by a city's government, which we've also made our tool capable of calculating.

The important thing to recognize here is that the tax was imposed upon distributors, who by the very nature of their business, are capable of rapidly adjusting supply to meet demand, which in this case, meant that the supply of sweetened beverages subject to Philadelphia's soda tax was far more elastic that the demand for these products, which is enabled so much of the tax to be passed through to retail consumers.

Elsewhere, Tim Haab did some back of the envelope math on the price elasticity of demand for soda in Philadelphia, where he found that "it looks like demand is slightly inelastic to elastic", so that part of the tax incidence consideration would appear to hold. On the supply side, if you scroll up and look at the screen shot showing the price of a 2-liter of Coca-Cola at that Warminster, Pennsylvania ShopRite, you'll see that they're offering a sale price where you can buy three 2-liter bottles of Coke for $5.50 (a unit price of $1.83). That's an indication that a larger quantity of the supply of sweetened beverages has been redirected to retail locations outside of Philadelphia's city limits.

That will likely drive two changes in consumer behavior. First, Philadelphia consumers who are mobile will be able to avoid the tax and purchase the sweetened beverages they demand from retailers outside Philadelphia. Second, the gap between the retail cost of beverages with and without the tax is such that it will encourage bootlegging, where beverages purchased legally outside of Philadelphia will be transported into the city and resold at a profit without having Philadelphia's beverage tax imposed upon them, further reducing taxed beverage sales in the city. And that latter activity is only just getting started....