Economics writer Robert Samuelson is worried. Specifically, he's worried about why stock prices have risen so much in response to Donald Trump's election as U.S. President on 8 November 2016.

In worrying, he not only conveys the conventional wisdom that seeks to explain the "Trump Rally" as some sort of outpouring of animal spirits linked to the promised policy changes that Donald Trump advocated on the 2016 campaign trail, but also zeroes in on the historically elevated price-to-earnings (P/E) ratio of today's stock market.

But there's the rub. What if those profits don't materialize?

Immediately after the election, it was possible (though naive) to think that Trump could quickly convince the Republican Congress to pass his economic agenda. Now, that optimism seems unrealistic. The difficulty of repealing the Affordable Care Act showed the limits of the White House's power. Similarly, big tax cuts may be doomed by budget deficits. Progress on infrastructure and regulation is also grudging.

So: If the main reason for the Trump Rally is missing, what's holding stock prices up? Good question.

Let's be clear: Stock prices are historically high by many traditional measures. Consider the price-earnings ratio, or P/E. It shows the relation between stock prices and underlying earnings (profits). Since 1936, the P/E ratio of the Standard & Poor's 500 stocks has averaged 17 based on the latest profits and stock prices, says Howard Silverblatt of S&P Dow Jones Indices. Now, the P/E is almost 24.

Leaving aside the modern day paganism of the animal spirits aspects of Samuelson's worries, we can confirm that Samuelson is making a very common and very basic mistake in advancing his narrative, one that many market observers make. That mistake lies in focusing on the ratio of stock prices with respect to their future profits, or rather their earnings per share, in assessing the relative valuation of stock prices, because earnings have very little to do with stock prices. Stock prices are really much more driven by the expectations for their dividends per share.

That's an important distinction because publicly traded firms often set their dividends independently of their earnings. Where earnings can fluctuate considerably from quarter to quarter for many firms, the consistency of dividends lets the stock prices of these firms be comparatively less volatile.

The following animated chart illustrates that point by flipping through the data we have for the average monthly price (blue), trailing year earnings (green) and trailing year dividends (red) per share for the S&P 500 from January 2007 through March 2017. If you're accessing this article on a site that republishes our RSS news feed, you may want to click through to our site to see the animation.

You can also see that difference is really exaggerated during the period of the Great Stock Market Crash of 2008-2009, when earnings nose-dived, but dividends were considerably more stable. Stock prices behaved much more like dividends than they did like earnings.

The chart also shows that same dynamic on a much smaller, but more currently relevant, scale for the period from July 2014 through February 2016. This period coincides with the timing of when global oil prices collapsed from the record highs they were recording in the previous three years, where many firms in the U.S. energy sector saw their precious earnings drop like rocks right along with their revenues thanks to the collapse of oil prices during that time.

In response to that deteriorating business outlook, many of these firms sought to maintain their dividends at the levels they were before their revenues and earnings fell, betting that they would be able to rein in their costs and continue being able to sustain their dividends unchanged. For these firms, that bet has paid off to this date as their stock prices proved to be far more stable than their revenues and earnings would suggest. The disproportionately larger decline of their earnings per share shrank the value of the denominator in the P/E ratio math, accounting for why their P/E ratios have escalated to be so high.

Since February 2016, oil prices have rebounded and somewhat stabilized, but not by so much to allow both revenues and earnings recover to their pre-oil price collapse levels, so we still have elevated P/E ratios within that sector of the market. That outcome then affects the S&P 500's P/E ratio because the energy sector makes up a significant percentage share of the market index, and a disproportionately larger share of its earnings.

That's the mathematical reason for why today's stock market index can appear to be so apparently elevated when measured by P/E ratios and is why they otherwise inexplicably would seem to be capable of to levitate in the absence of greater earnings. 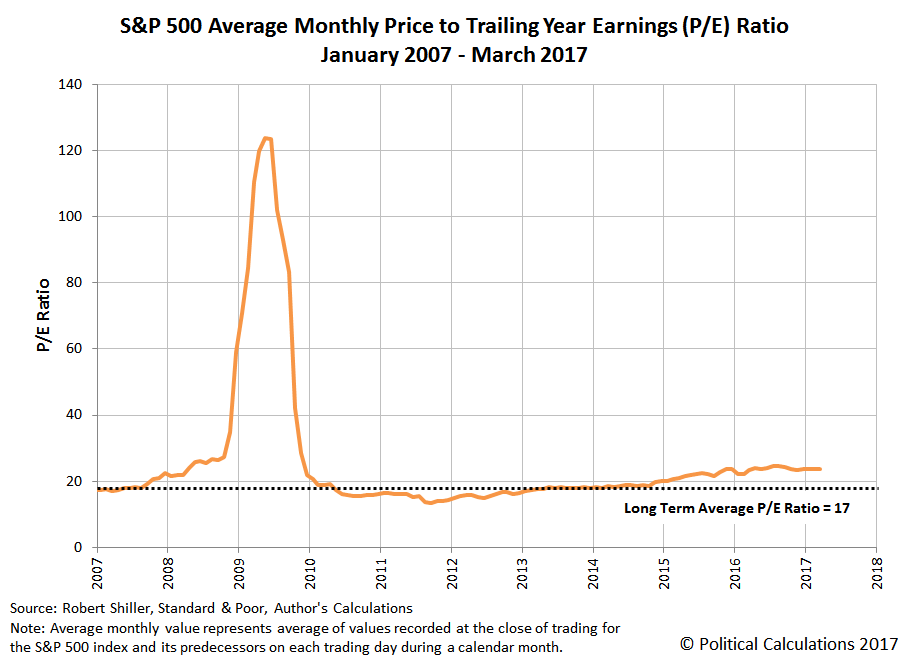 Samuelson also worries about the lack of growth of those earnings with respect to stock prices as a potential trigger for falling stock prices.

Stock prices have outrun profits' growth. According to Silverblatt, either added profits will materialize or, if they don't, stocks will decline. "The P/E is high," he says. "We are paying [in today's stock prices] for future and expected earnings. At some point, we need to see them."

As we've demonstrated, that's not necessarily true. So long as firms have sufficient earnings and free cash flow to sustain their established levels of dividends, there's every reason to think that they will also sustain their stock prices, even with very high P/E ratios, for prolonged periods of time. It would only be if their business outlooks deteriorated with the dual whammy of declining earnings and free cash flow that they would finally be compelled to announce the dividend cuts that would ensure declines in their stock prices.

Speaking of which, 2016 isn't the only time in U.S. stock market history when firms with falling revenues and earnings bet that they could outlast the business conditions that led to their financial distress. Very similar bets were placed by a lot of economically distressed companies back in 2006 and 2007. A lot of those companies proceeded to lose their bets after their business outlooks soured to the point where they could no longer put off cutting their dividends, which is what really sent stock prices crashing throughout 2008 and into 2009.

On a final note, if you want to play with the math that describes how all that works, here it is!