Political Calculations
Unexpectedly Intriguing!
12 January 2018
Your Paycheck in 2018, After the Tax Cuts Kick In 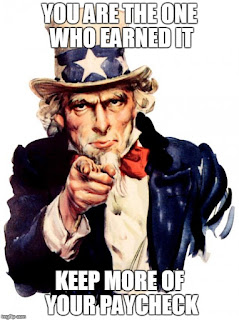 How much of your paycheck will you be allowed to keep for yourself in 2018 after a less greedy Uncle Sam has extracted what he wants out of it to put into his own till?

For many Americans, that has been something of a burning question ever since the Tax Cuts and Jobs Act of 2017 was signed into law before Christmas, where we have had to wait until the IRS issued an official notice of what will be the nation's new income tax withholding rates will be going forward on Wednesday, 9 January 2018. U.S. employers have been instructed to implement the new tax withholding rates as soon as possible, but by no later than 15 February 2018 (if your employer needs time to change their paycheck processing system, please click here to access the "before the tax cuts" version of this tool!)

In fact, you'll probably want to visit that tool specifically to get that information so you can determine how much your take home pay is changing as a direct result of the Tax Cuts and Jobs Act of 2017. After you have that information, plug the same information into the tool below, and we'll estimate what your paycheck will look like after the tax cuts have kicked in.

But wait, that's not all! Because a growing number of major U.S. employers have announced that they'll be giving many of their employees raises as direct result of the tax cuts being passed into law, you'll be pleased to know that our tool below can also take your raise into account too!

We can also answer other paycheck-related math questions that might be important to you, such as:

Our tool below is designed to answer those questions, as well as a number of others that may occur to you that we haven't considered! Just enter the indicated information as it applies for you, and we'll do our best to estimate how much of the money you work hard to earn will still be in your possession after the federal government has withheld what it wants from your paycheck! [If you're reading this article on a site that republishes our RSS news feed, please click through to our site to access a working version.]

Now for some quick results. For the default annual income of $36,000 with all the other default settings in place including having taxes withheld at the Single filing status and Biweekly paychecks, we estimate that the 2017 Tax Cuts and Jobs Act would increase the take-home income of a person with that income by $34.74 per paycheck. Multiplied by 26 paychecks in a year, that represents and increase in take-home pay of 903.24, the equivalent of a tax free raise of 2.5% with respect to a pre-tax income of $36,000.

And because we couldn't just leave it there, we also ran the numbers for an annual income of $400,000 that is paid out quarterly, which just happens to currently be the annual salary of the President of the United States (which President Trump donates to various causes). Thanks to the Tax Cuts and Jobs Act of 2017, and assuming all the other default settings, President Trump's after federal withholding tax income rises by $61.44 per quarterly paycheck, which would nets him an additional $245.76 per year and is the equivalent of a tax-free raise of slightly over 0.06%. [Note: These figures apply until the President's cumulative income exceeds certain thresholds - keep reading....]

Now that we've given you a sense of how much money you'll have withheld in 2018 from each of your paychecks by the U.S. federal government, at least until the new tax cuts take hold, we should note that there are some really complicating factors that may come into play during the year depending upon how much you earn.

For example, in 2018, once you have earned over $128,400, you will no longer have the Social Security payroll tax of 6.2% of your income deducted from your paycheck (or 12.4% if you are self-employed, but our tool above is designed for those employed by others). But then, by the time that happens, you'll have long been paying taxes on your income that are taxed at rates that are at least 10% higher than those paid by over half of all Americans.

There's also the complication provided by the so-called "Additional Medicare Tax" that your employer is required to begin withholding from your paycheck if, and as soon as, your year-to-date income rises above the $200,000 mark, which is part of the extra taxes imposed by the "Affordable Care Act" (a.k.a. "Obamacare"). Since the money collected through this 0.9% surtax on your income does not go to directly support the Medicare program, unlike the real Medicare payroll taxes paid by you and your employer, it is really best thought of as an additional income tax.

In the tool above, in case the amount of your annual 401(k) or 403(b) retirement savings contributions exceed the annual limits set by law, we've limited the results our tool provides to be those consistent with their statutory limits, and will do so as if you specifically set the percentage contributions for these contributions with that in mind. Also, our tool does not consider whether you might take advantage of the "catch-up" provisions in the law that are available to individuals Age 50 or older.

The IRS Is Developing Its Own Withholding Tax Calculator?

Maybe the funniest story we saw yesterday was published by Reuters at 5:18 PM Eastern time. Here's the money quote (emphasis ours):

The Trump administration on Thursday said most U.S. workers will see bigger paychecks in February, as a result of the Republican tax overhaul, but many will need to make sure taxes are withheld accurately with an online calculator that does not yet exist.

Well, we fixed that problem pretty easily now, didn't we? And it only took about an hour of actual work, most of which involved writing up the text that changed from the "before the tax cuts take effect" edition and to add the results of the three income scenarios that we ran. How much do you suppose the IRS' coders are getting paid?

More seriously, we'll be happy to link to the IRS' withholding calculator when they get around to posting it online.

Update 12 January 2018, 8:15 PM EST: Here is where the IRS Withholding Calculator will be able to be found. Although more than 24 hours after Reuters' report, it's not there yet!

Then again, if you live in one of the seven states that have no personal income tax for wage and salary income (Alaska, Florida, Nevada, New Hampshire, South Dakota, Tennessee, Texas, Washington, or Wyoming), our tool above will provide you with a very good estimate of your actual take-home pay.