Sometimes, we here at the Inventions in Everything team are surprised by what's lurking behind the title of a patent. Usually, the titles given to U.S. utility patents are very, shall we say, utilitarian, where they are very technically describing exactly what they are. So much so that when we first came across inventor Rachel Lorraine Herrera's 2017 patent for a "Cat eye makeup applicator", our first thought was that the invention would be a device for applying makeup to the eyes of cats.

Oh, how wrong we were! Instead, the invention is a device that humans can use to apply eyeliner makeup on the skin adjacent to their eyes in a way that can reliably and repeatably achieve a desired and popular pattern: cat eyes!

Herrera describes the problem her invention addresses in the background section of U.S. Patent 9,635,924 (emphasis ours):

A typical cat eye has a thicker base portion with a tapering extension, or wing, that extends outward at a desired angle and in straight or curved fashion. The overall cat eye can be large, small, curved, natural, or dramatic, to name but a few possible descriptions.

The cat eye style of eye makeup is best described as an extension of the eyeliner on the top of the eye drawn out past the outer corner of the eye to a pointed shape. There is an infinite combination of shape, length, width and angle, all of which are personal preference for the individual. Cat eye makeup has been in fashion throughout the ages, one of the most recognizable and famous examples being Cleopatra. Cat eye makeup can be seen on Hollywood legends like Elizabeth Taylor, Marilyn Monroe, Sophia Loren and Raquel Welch, as well as contemporary singers such as Lady Gaga, Madonna, and Katy Perry.

If the user wants the eyeliner to include cat eyes, they are traditionally applied in a freehand manner as with the rest of the eyeliner. When doing it by hand, it is difficult to keep both cat eyes identical and get the desired shape. It takes a great deal of skill because the left and right cat eyes must be symmetrical, and because there is a certain point that you need to start applying each cat eye and another point that, as you move, you need to "wing" it while distancing the applicator from the user's face to narrow the stroke. It is especially challenging for somebody that is applying eyeliner around their own eyes.

We've excerpted Figures 2 through 6 of Herrera's patent, which illustrate her invention in use. 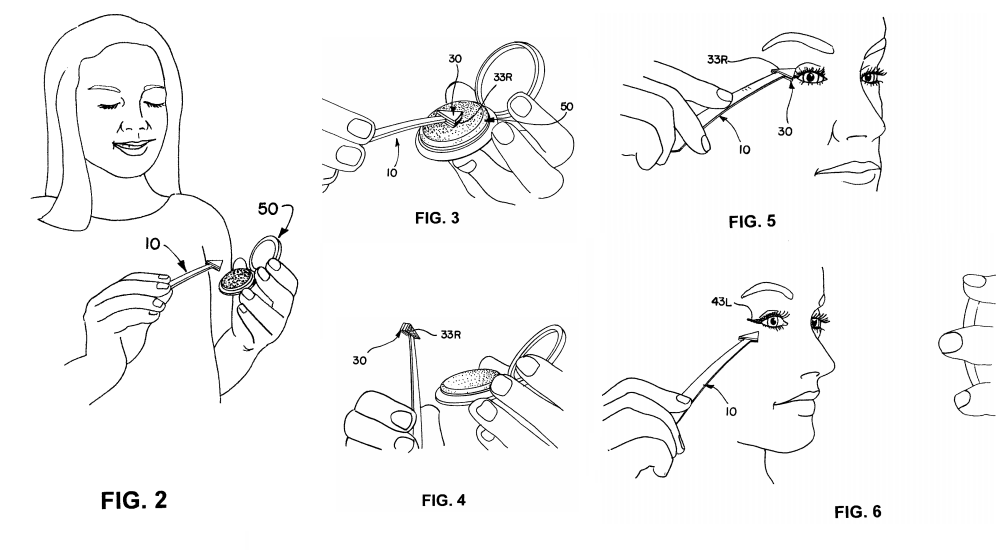 But that's not all that Herrera's cat eye makeup applicator can do! The patent goes on to illustrate a number of different eye makeup fashions that individual users of her invention can now reproduce more easily and more reliably without the aid of a professional makeup artist. 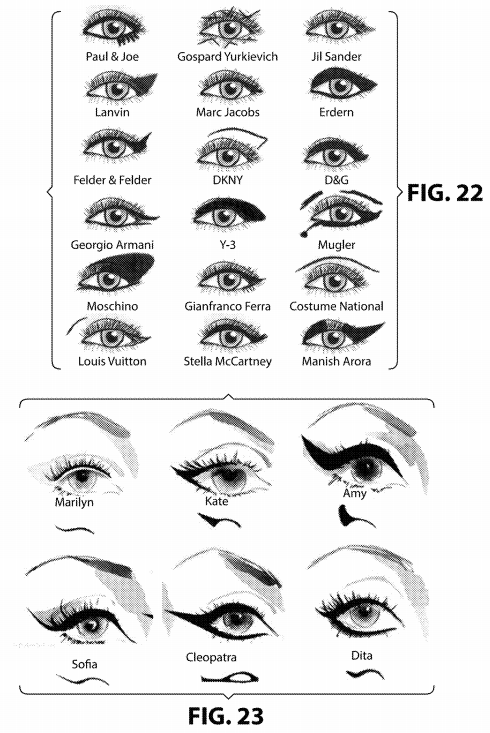 And the best part is that no actual cat eyes were harmed to advance the state of the art in makeup application devices!

One thing that we weren't able to determine is whether any cosmetics firm has yet licensed Herrera's invention to bring it to market. We did find some "cat eyeliner" stencils and other applicators that have been produced to create the fashion, but nothing with what appears to be the more generally useful type of applicator that is described by her patent.

This is the last of the latest series for Inventions in Everything! But don't worry - we'll be returning this summer where we'll be celebrating the issuance of the U.S. Patent and Trademark Office's 10,000,000th utility patent, along with the other flights of inventive fancy. Until then, here's our most up-to-date archive!