Political Calculations
Unexpectedly Intriguing!
May 24, 2018
GE Deflocks from the SP 500

It didn't last very long. At all. But it was still beautiful when it happened!

In case you missed it, we're referring to what happened to the stock price of General Electric (NYSE: GE) just one day after it had finally converged with the main flock of stocks that is the (Index: SPX) after months of having so sharply deviated from the trajectory of so many other stocks, where our leading paragraph in this article is a play on the final paragraph in our previous entry!

We live to capture "before" and "after" moments like this, and what happened to GE's stock price on Wednesday, 23 May 2018 was truly a thing of chaotic beauty, because after finally catching back up to the S&P 500, investors collectively decided that GE didn't belong anywhere near it. The following chart shows how decisively investors made that call.... 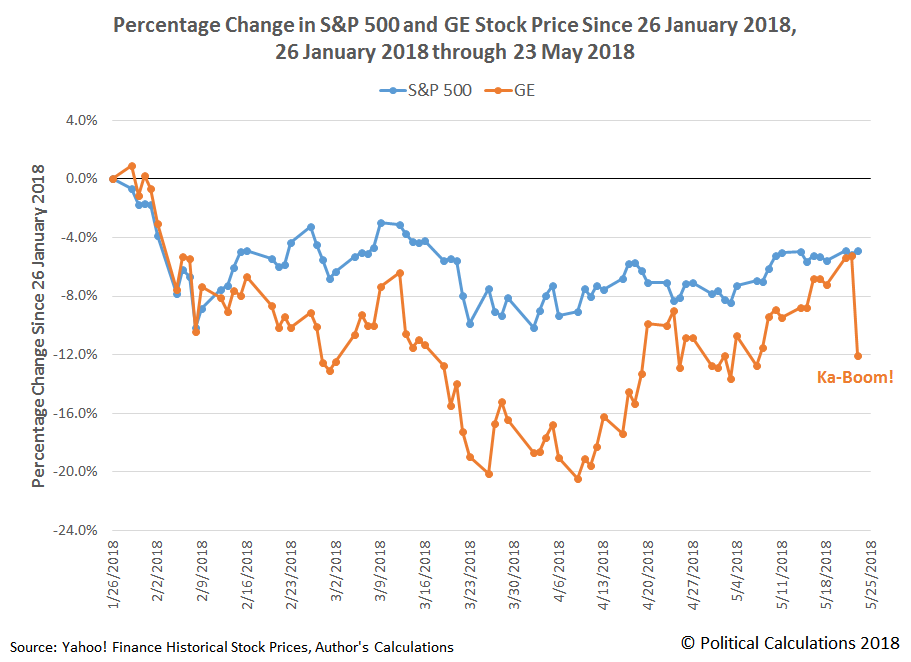 Now, let's talk about why it happened. Something happened on 23 May 2018 to specifically provoke this kind of negative reaction from GE's shareholders and stock market investors, so let's see if we can pinpoint exactly when it happened. The following chart provides a timeline for GE's stock price during 23 May 2018.

More importantly, we see that after dropping early in the morning, GE's stock price was fairly stable at that lower level. Until about 11:40 AM EDT, when it suddenly dropped nearly another half a percent.

But that downward move would pale against what happened after 11:55 AM EDT, when GE began steadily dropping over the next two and a half hours, losing another 5% of its value before bottoming for the day. It improved a little after that, but by the end of 23 May 2018, GE's stock price had dropped by nearly 7.3%.

So what happened to cause GE's investors to become so demoralized about the company's future prospects so quickly? We can't put it any better than MarketWatch's Tomi Kilgore:

The stock was headed toward the biggest one-day drop since it plummeted 7.2% on Nov. 13, 2017 after Flannery, then newly named CEO, unveiled a transformation plan, including the halving of the company’s dividend. It was down only about 2% at 11:30 a.m. ET Wednesday, which was just before Flannery started speaking at the Electrical Products Group conference in Florida.

Ah yes, we're narrowing in on the problem.... What could John Flannery possibly have said at the conference to send GE's stock price into a tailspin?

The Motley Fool gets straight to the heart of the matter:

Shares of General Electric (NYSE: GE) took a dive today after CEO John Flannery cooled off hopes of a speedy turnaround at the struggling conglomerate. He warned that the industrial giant's power division wouldn't see profit growth until 2020, and also said he couldn't guarantee the company would be able to keep paying a dividend.

Oops! That kind of statement is pretty much the last thing that investors are ever looking to hear. Especially for a company with a long history of paying dividends. But what exactly did Flannery say? Reuters has that part of the story:

Asked by an analyst if the 2019 dividend was assured, Flannery said that while payout is important to investors, it depended on multiple factors.

GE’s decision to merge its transportation business with rail equipment maker Wabtec Corp (WAB.N), announced on Monday, was among the changes that could affect the dividend, he said.

“We have to see how this plays out,” he said.

Analysts read this as a sign that GE is likely to reduce its dividend, which is 48 cents a share.

“The primary takeaway is the dividend will be cut as assets are sold,” said Jeff Sprague, an analyst at Vertical Research Partners.

“Proceeds from sales have to go to debt reduction. Cash flow from assets sold is obviously gone making dividend unsustainable.”

In the section above, Reuters is referring to GE's annual dividend payout of 48 cents per share. What that tells us is that the following chart, which we first presented just over a week ago, has suddenly taken on increased relevance. 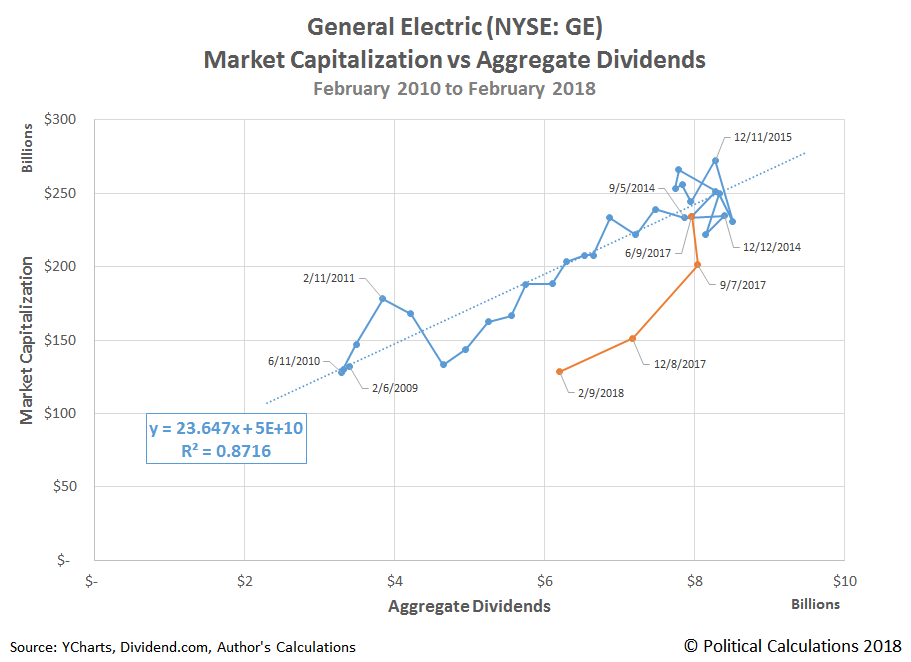 Or will investors take the stock price even lower in anticipation of even larger dividend cuts that have been suggested at by GE CEO John Flannery's comments? In the next few weeks, GE will declare its next quarterly dividend, which would be the optimal time for the company to change its current dividend policy if they're going to do so, now that investors are well primed for it. We'll revisit the question after they have.