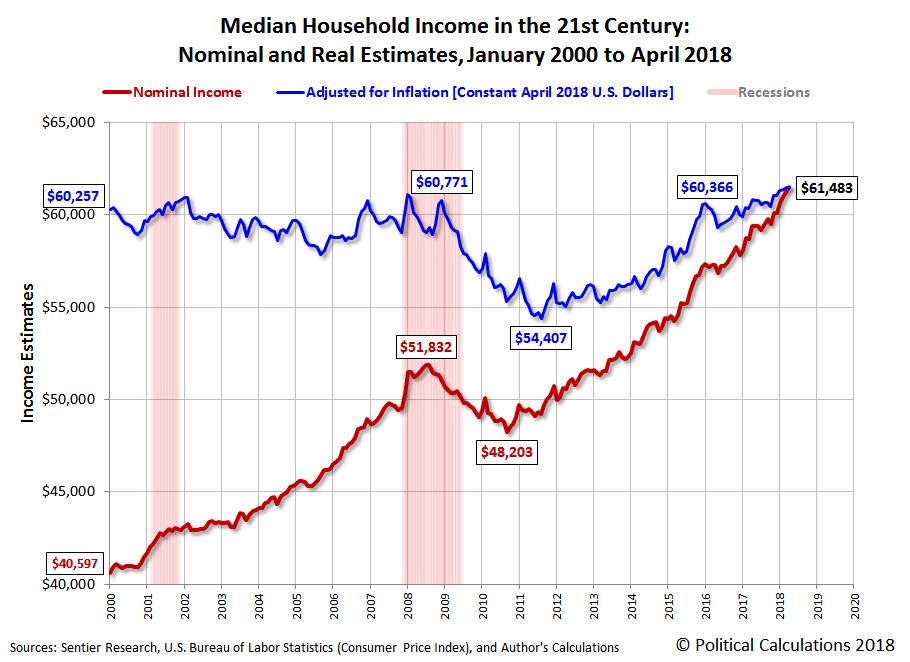 Sentier Research had previously suspended reporting their Current Population Survey-based monthly median household income data series with their estimate for May 2017 before resuming it again with their report for March 2018 last month. We've reverse engineered the nominal data for the missing months from June 2017 through February 2018 from Sentier's Household Income Index, finding the following nominal median household income estimates for these months:

The return of Sentier Research's Census-survey based monthly income estimates allows to jump start a revision to our alternative approach to developing an estimate of the United States' median household income from aggregate personal income and population data published by the U.S. Bureau of Economic Analysis, which we announced was in the works last month.

Sentier Research's data for June 2017 through March 2018 confirms something that we've been increasingly concerned with in our own estimates, where we've recognized that they were very likely skewing to the underside of what the actual median household income estimates derived from data collected in the U.S. Census Bureau's ongoing Current Population Survey would indicate. In the absence of Sentier Research providing its monthly median household income estimates based on the Census Bureau's survey data, we were going to have to wait until the Census Bureau published its annual estimate for median household income for all of 2017 later this year, in September 2018, to be able to work out a more up-to-date correlation with the personal income data series we base our own estimates upon to account for the differences.

That concern dates back to our report for August 2017, where we've periodically commented upon it in other analyses over the intervening months. Fortunately, our estimates have remained within a statistically relevant three standard deviation margin of error with the survey-based figures that Sentier Research reports, but that level of accuracy would have been increasingly difficult to sustain with the passage of additional time, beginning with April 2018.

In the following chart, we've applied our same methodology as before, but over two distinct periods, from January 2000 through March 2015 and from March 2015 through April 2018, to refine our approach. 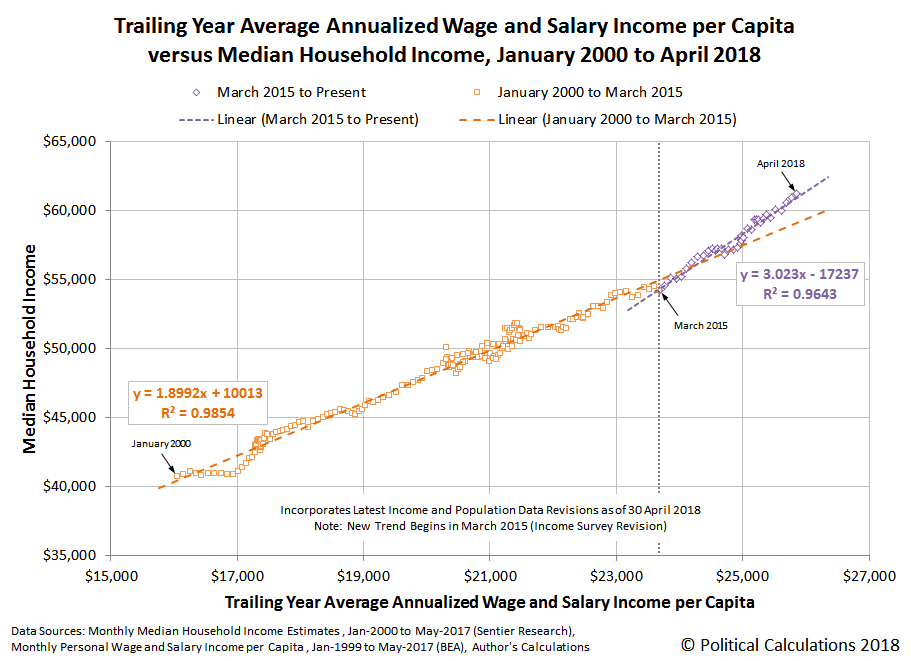 March 2015 represents the break point between the two periods because it marks the point when the U.S. Census Bureau implemented significant changes to its income survey methodology.

Following this refined approach, we find that our estimate for April 2018's median household income comes in at $61,199, which is with a 0.5% margin of error with respect to Sentier Research's estimate for the month. By comparison, using our previous regression analysis that covered the period from January 2000 through May 2017, our unadjusted approach would have returned an estimate of $59,545, which is 3.2% below Sentier Research's April 2018 estimate.

Going forward, we'll present both Sentier Research's estimates and our own alternate measure in our ongoing monthly median household income series. Think of it as being like the separate employment estimates that the U.S. Bureau of Labor Statistics and the paycheck processor ADP independently release each month, where even though they would seem duplicative of each other, having both available can be valuable because they're derived from different original data sources that together can provide greater insight into the overall employment situation in the U.S. than would be possible from having access to just one alone.