Things aren't going so well for Philadelphia's controversial soda tax in its second year of existence, which is under threat. Let's catch up with how it's doing in 2018:

The Pennsylvania Supreme Court will weigh the legality of Philadelphia's beverage tax in a Tuesday hearing as new data show the city is drawing in less revenue from the controversial tax in its second year than in 2017.

The city's monthly revenue collections show PBT brought in $5.8 million in January and $5.5 million in February. Receipts for each month are collected by the end of the following month. The $11.3 million total is about $817,000 less than the soda tax revenue generated in the same period a year ago, when the first two months of 2017 saw the Kenney administration buoyed by PBT's strong start.

The revised yearly estimate of $78.8 million averages out to a monthly expectation of $6.5 million, an amount the Mayor's Office exclusively told the Business Journal it will hit with March revenue.

Believe it or not, there's good news here! The city did indeed hit its 2018 average monthly target of $6.5 million for the Philadelphia Beverage Tax in March 2018. Unfortunately, that was over $521,000 less than what the city collected in March 2017, where the city is now cumulatively over $1.3 million short of its reduced soda tax revenue target of $19.2 million through the first calendar quarter of 2018. The following chart shows how Philadelphia's soda tax collections are faring: 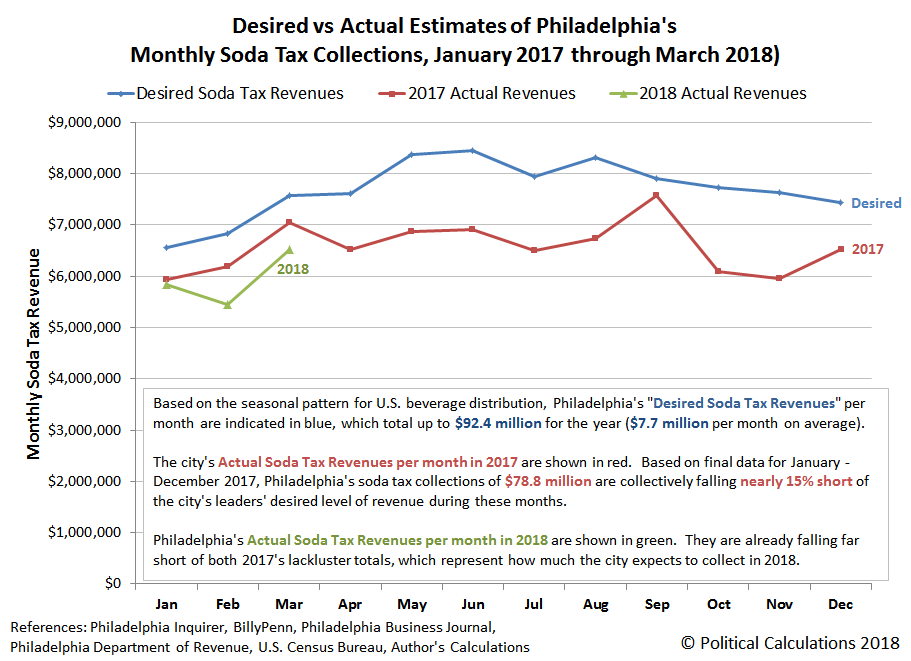 At this point of time a year ago, the city was cumulatively over $1.8 million short of its original revenue target of $21 million for the first quarter of 2017, where 2018's first quarter revenue collections are now some $3.1 million below that level.

Accepting that we could very well be wrong, here's what we're thinking. Starting with the observation that Americans consume the lowest quantities of the kinds of beverages that are subject to Philadelphia's soda tax during the first quarter of every year, we think that Philadelphia's revenues from its controversial tax were relatively elevated in the first three months of 2017 compared to 2018 because Philadelphians hadn't yet fully worked out all the strategies that they would come to employ to avoid paying the tax back when it first went into effect. Soda tax hacking strategies that included buying beverages that would be subject to the tax outside of the city or buying packets of sugary drink mixes that were not taxed by the city and making their own sugar-laden beverages.

By the second quarter of 2017 however, many Philadelphians had become adept at avoiding the tax, where the monthly tax revenue figures from April 2017 onward would be reasonable projections for the amount of revenue that would be likely to be collected over the remainder of 2018, aside from unique factors that may affect beverage sales and the corresponding tax collections, such as abnormally hot or cool weather conditions.

And then, there's the wild card of what the Pennsylvania Supreme Court may decide, which may make the entire issue of Philadelphia's revenue collections from its controversial soda tax moot. That court heard arguments in a case challenging the legality of Philadelphia's soda tax back on 15 May 2018. At this writing, the court has not yet indicated when it will issue a decision in the case.

The Philadelphia Beverage Tax's existence is also under threat from Pennsylvania's General Assembly, where legislation that would abolish the tax has been advancing through the legislature.

One issue that has been resolved however is which purported beneficiary of Philadelphia's beverage tax would "get stiffed" should city official accept the reality that the tax would not produce the revenue they had promised it would. The designated loser turned out to be Philadelphia Mayor Jim Kenney's "Rebuild" initiative to improve public parks, libraries and other city infrastructure, which has been dramatically scaled back from promised investments.

It was only ever a matter of time. Since the mayor has proposed hiking Philadelphia's property taxes to increase funding to support the city's public schools, it's likely that the Mayor's "free" pre-K program will be able to get the funds it would need to continue and to expand from that more stable source of revenue should the Pennsylvania Supreme Court rule against Philadelphia's soda tax. The way it should have been funded in the first place, if city officials had cared more about providing services to the public more than milking additional revenue out of the city's residents.

We probably shouldn't have said that last part. Philadelphia's politicians may start thinking about taxing milk as they might seek to close a "loophole" that they purposefully created when they originally crafted the city's controversial beverage tax.