As China's economic growth has slowed considerably since 2017, Chinese leaders have been increasing seeking to halt its decline by firing up its stimulus engine, where to date, they have achieved mixed results.

But they are clearly having an effect on China's economy, which we can see in the rebound of the rate at which carbon dioxide is accumulating in the Earth's atmosphere: 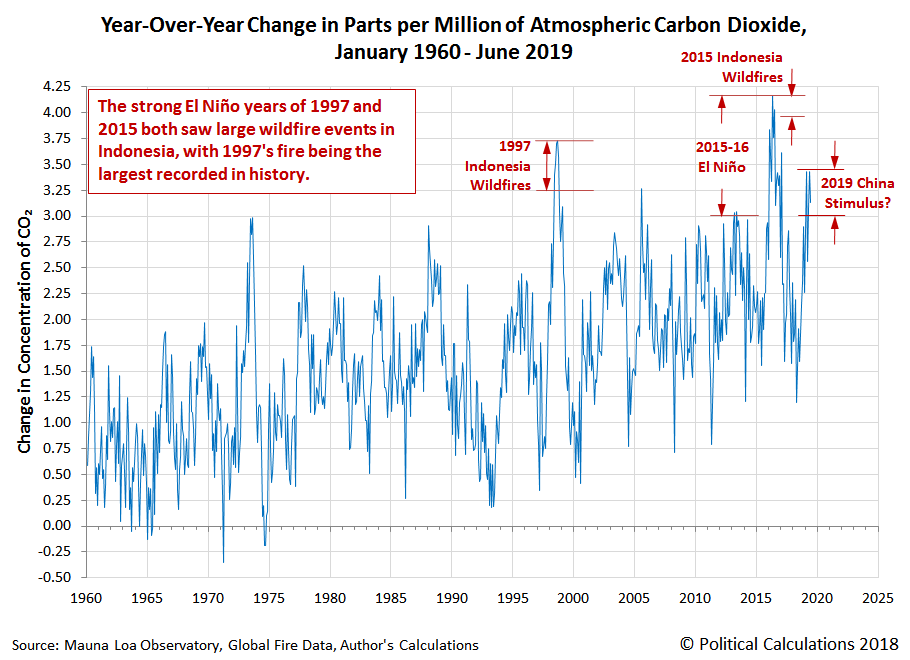 Where carbon dioxide emissions are concerned, China is "the world's largest emitting country" by a wide margin, where the effects of China's latest series of economic stimulus has not gone unnoticed by environmental analysts:

The country’s sudden, significant increase in carbon emissions could be linked to a wider slowdown in the economy, environmental analysts said.

“Under pressure of the current economic downturn, some local governments might have loosened supervision on air pollution and carbon emissions,” said Yang Fuqiang, an energy adviser to the Natural Resources Defense Council, a U.S. environmental organization.

China’s top planning agency said Wednesday that three areas — Liaoning in the northeast Rust Belt and the big coal-producing regions of Ningxia and Xinjiang in the northwest — had failed to meet their targets to curb energy consumption growth and improve efficiency last year.

Other recent headlines confirm that where China's economy is achieving new stimulus-sparked growth coincides with the kind of industrial output that produces large volumes of new carbon dioxide emissions:

In 2014, the most recent year for which it has provided data, China acknowledges it emitted 12.3 billion tonnes of carbon dioxide into the Earth's atmosphere, which are believe to have continued to increase in the years since. That is more than double the 5.73 billion tonnes of carbon dioxide emitted by the United States in 2017, whose emissions have been declining in recent years.