Komal Sri-Kumar is the president and founder of Sri-Kumar Global Strategies who just had a very interesting bit of analysis published by Bloomberg: The Bond Market Is Now a Giffen Good. In this piece, he makes the argument that sovereign debt, such as U.S. Treasuries, may be considered to be a Giffen good, which he explains in his opening paragraphs:

With some $13 trillion of bonds worldwide yielding less than zero percent, it would be easy to characterize fixed-income assets as nothing more than a giant bubble waiting to burst. Those who agree probably haven’t heard of the concept of a “Giffen good.”

Simply put, a Giffen good is a paradox of economics where rising prices lead to higher demand, which is in contrast to the negatively sloped demand curve that students learn in Economics 101. Named after 19th century Scottish economist Sir Robert Giffen, a Giffen good is typically an essential item that, because of its higher price, leaves less resources to purchase other items. (To be sure, many economists debate whether a Giffen good actually exists.)

In terms of the bond market, it’s important to understand that the rapid plunge in yields, especially for sovereign debt, reflects increased concern about the state of the global economy. Those concerns, in turn, only fuel demand for the safest assets even at negative yields, which pushes prices higher and yields even lower.

He goes on to identify three factors (which we've excerpted below) for why the interest rate yields of sovereign bonds and Treasuries are falling, which in the strange world of bond investing, means their prices are going up:

First, inflation rates have been low or declining in the U.S., euro zone and Japan, encouraging investors to allocate more resources to fixed-income assets despite falling yields. High rates of inflation reduce the purchasing power of bond holders, but low rates of inflation do the opposite....

Second, expectations for central bank monetary policy have been kind to bond investors. Ten-year yields have fallen below policy rates in the U.S., Germany and Japan, providing a reason – and pressure - for monetary authorities to reduce rates....

Third, the steep decline in U.S. and German risk-free yields have increased the attractiveness of lower-rated sovereign credits.

How long sovereign bonds and Treasuries might act like Giffen goods remains to be seen, but we should recognize that the conditions that bring Giffen goods into existence are typically transitory. Either those conditions will not endure, or should they persist, at some point, the rising prices that might have initially motivated investors to buy increased quantities of sovereign bonds may grow too high, with demand for sovereign debt sharply dropping off after that point as the Law of Demand reasserts itself.

No one really knows how high that price is. Nobody should want to find out the hard way.

Since then, a few analysts have weighed in on the topic, including StatsGuy's Money as the Ultimate Giffen Good at The Baseline Scenario in December 2009, Eric Falkenstein's Treasuries a New Kind of Giffen Good at Falkenblog in August 2011, Kevin Erdmann's discussion of Bonds and Real Estate as Giffen Goods in May 2014, and our own followup More Evidence That Debt Is A Giffen Good in January 2017.

While not considering the role of either money or debt as a Giffen good, Timothy Taylor wrote about recent, strong evidence of Giffen Goods in Real Life at Conversable Economist in January 2012. Since the reputation of Giffen goods is that they are elusive, it's fascinating to see them documented whenever they appear.

And speaking of sovereign debt, we would be remiss if we didn't include Visual Capitalist's United Nations of Debt infographic showing data from 2017: 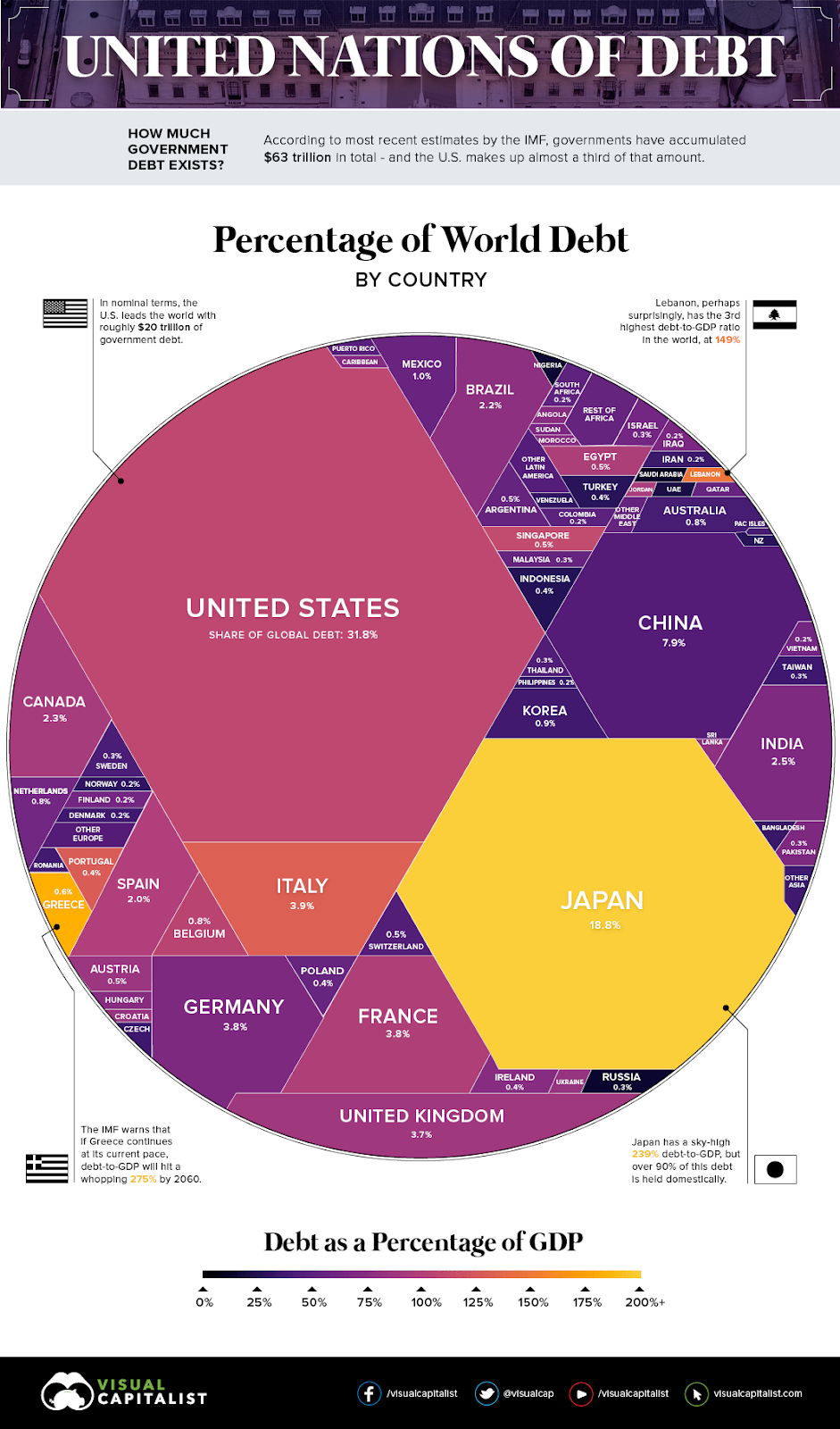 Nearly every nations' debt is bigger now. What could possibly go wrong?